Meeker Park is an unincorporated concentration of summer cabins and tourist lodging dating from the early 1900s along Hwy. 7 just east of the the southeastern entrance station of Rocky Mountain National Park and north of Allenspark. It is home to the Meeker Park Lodge, owned and operated by the Dever family since 1922, and several summer cabins. It is also the gateway to the Wild Basin area of the national park, known for its rugged terrain and limited crowds located at the foot of Mount Meeker and Longs Peak.

For much of the 20th century, the National Park Service considered Rocky Mountain National Park a “natural  to return the landscape to pre-contact conditions. Though some buildings were protected, not until 1988 was the “natural” designation lifted and historic preservation embraced. Since then, numerous park buildings have been restored or rehabilitated. The listings here represent those in the Meeker Park vicinity. Many more are located near Estes Park and on the west side of the Continental Divide. Visit the park to discover more about the history of these and many other places recognized for their historic significance. 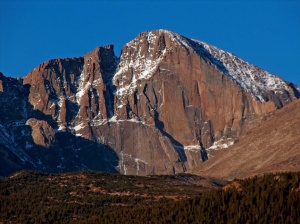 East Longs Peak Trail
The trail to the summit of Longs Peak reflects the principles of National Park Service Naturalistic Design from the 1920s through the 1940s.  Active tourist use of the trail began in 1873 and continues up until the present day with hundreds of personal accounts repeatedly expressing exhilaration over the scenery and exhaustion from this high-altitude effort.  Initially lodge owners maintained the trail and climbers hired local guides to assist in their mountain ascent.  Between 1900 and 1906, Enos Mills forged his skills as a public speaker and naturalist while guiding visitors up the trail.  He used his guided tours to educate visitors about the value of conserving and preserving the surrounding natural environment.  This experience firmly established his reputation as a local mountain expert and he eventually served as the figurehead in the effort to create Rocky Mountain National Park. The upper portion of the trail remains as Mills experienced it during his more than 300 treks to the summit, including his first at age 14. With the establishment of the park in 1915, the National Park Service took over maintenance of the trail and also offered guides for tourists trekking up this well-known “Fourteener.”

Sandbeach Lake Trail
The trail is associated with the early resort industry and tourism in the Estes Park region, from its construction and initial use in 1910 through 1945, the year in which tourism in the park significantly changed due to increased automobile traffic after World War II.  Follow the 9.9-mile loop trail through vibrant wildflower displays and past snow-fed streams to a huge alpine lake with views of Mount Meeker and sand beach. The lake was formerly larger but the Park Service, in the wake of the 1988 Lawn Lake disaster, removed the dam at Sandbeach Lake and regraded the land to its original slope. 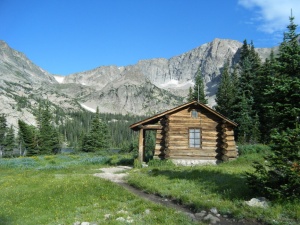 Thunder Lake Patrol Cabin
Built in 1930, the small, well-maintained log cabin is a good example of the National Park Service’s Rustic style design philosophy—a style of architecture that developed in the early and middle 20th century in the park service through its efforts to create buildings that harmonized with the natural environment—as implemented at Rocky Mountain National Park during the 1930s. The 12-foot by 16-foot ranger cabin has a gabled roof that is covered with wood shingles and a stone fireplace. The one story one-room log cabin’s walls rise from an uncoursed fieldstone foundation. The logs are saddle-notched, projecting an increasing distance at their ends from top to bottom. The trail to Thunder Lake leads past Copeland Falls, Calypso Cascades and Ouzel Falls.

Wild Basin House
Originally built in 1931, the five room one-story Rustic style ranger cabin has a gabled roof that is covered with wood shingles. The log residence was built to plans provided by the National Park Service Branch of Plans and Designs at a cost of $2,500. The one-story house measures 23 feet by 31 feet, resting on a fieldstone foundation, with a shallow-pitched wood shingle roof. The interior comprises three rooms. Wild Basin is home to some of the parks most spectacular summits and some world class climbing.

Wild Basin Ranger Station and House
This one-story, duplex-like Rustic style log building was constructed in 1932. It is divided into a three-room ranger station and a four-room seasonal residence. The station features a steeply-pitched gable roof, overhanging to form a porch at the front. The porch section of the roof is supported by corbeled logs at each end. The foundation is concrete, and the gabled roof is covered with wood shingles. Wild Basin Ranger Station provides information about Wild Basin and Rocky Mountain National Park, back-country permits, and offices for the law enforcement rangers.