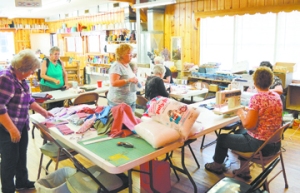 By Jennifer Pund
ALLENSPARK
The Hilltop Guild in Allenspark is not a club, it’s not a society and it’s not a commercial venture. It is a productive, creative association of residents returning the fruits of their labor to areas in need within the greater Allenspark community.

What started in the 1930s as a gathering of women meeting in each other’s homes to sew, has evolved into an organized group of local mountain ladies dedicated to supporting the community, while being crafty. Using the Kelley House as their home base since 1954, with improvements and upgrades donated by locals, the HillTop Guild flourishes as a constant connection for ladies of the area and a tremendous source of community support.

The Kelley Family were red fox breeders—some of which can still be see in the area—and deeded their large log building on Hwy. 7 in Allenspark to the Hilltop Guild for a meeting place. Since then, the building named in their honor has been filled with bustling women cooking, weaving, sewing, laughing and sharing all focused on giving back.

Guild member Joan Donavon remembers vising the Kelley House as a child to hear resident Chief Charlie Eagle Plum entertain the kids and adults with stories; some truer that others. “Those are my fondest memories of this place,” she said. “Charlie Eagle Plume would stand by the smoky fire and all the kids would sit around and he would tell native American stories, fairy tales and talk about the area.”

Today, the building is home to groups like the Warped Weavers, who gather weekly to weave on one of the six floor looms, two table looms or two Inkle looms to make rugs, blankets, belts and straps. Other members gather at the Kelley House to sew pillows, make beaded items, learn gourd art, knit, quilt, make cards, press flowers, jar jam, create treats or goodies and so much more, with the single focus of giving back to the community.

All their efforts and hours of creating culminate into one grand event, their Annual Hilltop Guild Festival and Bazaar, Aug. 2 from 9 a.m.-3 p.m. at the Kelley House, 18720 Hwy 7 in Allenspark. This one-day event affords the public the chance to purchase the works of Guild members including their famous Chokecherry jam and the ever-popular peanut brittle—over 170 pounds of which were produced just last week. Browse through books, white elephants, collectibles, arts, crafts, weaving and needlework pieces while checking out the live music and enjoying the yummy food and baked goods. A quilt inspired by the 2013 flood titled “Didn’t It Rain” will be raffled off this year along with a crocheted afghan, painted saw blade, decorated gourd, embroidered Father Christmas and hand crafted Jewelry all made by Guild members.

The proceeds from the Bazaar is what funds the Hilltop Guild’s philanthropic contributions like Estes Park Crossroads Center and disaster relief. Donating funds to support the Allenspark Fire Protection District is very important to these ladies.

“We are a group of women that like to be crafty, but more importantly, it’s the community service. We want to give something back to the community. The fire department is very important to us, it’s all volunteer and with the wildfires and we are so remote, it’s nice to have EMS right here,” says member Peg Daily.

The Guild also owns two adjoining properties that once belonged to the Kelley family, on which the Alonzo Allen Cabin and Bunce Schoolhouse stand. The caretaking and preservation is tasked to the Guild. They open the schoolhouse for tours on certain Saturdays of the summer and is used as a museum. The Allen Cabin fireplace and bits of foundation are all that remain behind a protected fence about two miles west of the Kelley House.

The Kayenta Indian School in Arizona is a boarding school that is supported by the guild. Each year their donations are used to buy eyeglasses and coats for the year round students. A few year’s ago the guild decided to end exchanging Christmas gifts instead they collect clothes for these underprivileged students.

“Some times these kids come back to school with nothing but the clothes on their backs,” Snell says. “and that’s why I am here, and why most of the ladies are here, because what we do moves on, they know what they are doing is going to help someone else.”

The Guild also provides low interest loans and scholarships to area students moving on to college from the Lyons, Estes Park and Allenspark area.

“Mostly what we do is work to give away our money. A few years ago I got to hand those kids their scholarship certificates and it was the best day of the year,” member Judee Snell recalls.

As in any group, there are many differences between the individuals, but the love for the community, for giving-back and most importantly, for one another is what keeps the group going 10 months each year.

“Our community is very different in that there are a lot of different political views, but this group opens their arms. When we do the peanut brittle, we have the best time & the jelly days are a lot of fun too,” Snell said, “and that’s what it’s all about, working with everybody else. You know when you come in somebody’s got their arms out to give a nice hug and a warm smile and that’s important.”