By Jeffrey V. Smith
LYONS
Yonder Mountain String Band has always had a strong relationship with Planet Bluegrass. Banjo player Dave Johnston says playing the main stage at the Lyons venue during the 1999 RockyGrass Festival was “the first big step in the band’s career.” To begin a new era for the band and venue and “have a good old-fashioned fun time with friends, fans and family,” the beloved, locally grown, jamgrass act welcomes 4,000 music fans to the 15-acre Planet Bluegrass Ranch for another Kinfolk Celebration, Sept. 19-20. 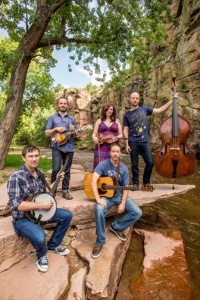 The Yonder boys staged their first Kinfolk Celebration, created as a way to show appreciation to their dedicated fans, at Planet Bluegrass in 2002 and returned in 2003. The event was on the road for many years before it came back to the Lyons ranch in 2012 to celebrate the ten-year anniversary. With both the band and the venue having gone through major changes since they last crossed paths, 2014 is the perfect time for everyone, including fans, to get reacquainted.

Earlier this year, mandolin player Jeff Austin and the rest of Yonder Mountain String Band parted ways. It was a previously unannounced move that left many fans shocked and wondering where the band was headed. While not everyone has embraced the change, many fans are excited to see how the music from their favorite pickers will grow. Despite the changes in personnel, band members’ musical intentions, ambitions and energy remain the same.

“I would say that we haven’t really made an adjustment, but we’ve reinforced our desire, or propensity, to create and write music together and continuing the Yonder Mountain feeling and part of the Yonder Mountain vibe,” Johnston said. “From the outside looking in it would seem like we’re making an adjustment, but from the insiders point of view, from how I see it, we’re just settling into making music and to write and perform.”

The band has been on the road with a variety of line-up additions, including heavy hitters like Sam Bush and Jerry Douglas, but national mandolin champion Jake Jolliff and former Cornmeal fiddle player Ally Kral have joined the band on most dates. “They have made some really great contributions, and are really great people,” Johnston said. “They fit really well. They understand our workflow and we understand theirs, so it feels really good.”

To Johnson, as a musician, things are pretty much the same up on stage. “It just feels an awful like it was fun then and it’s fun now,” he said. “Yonder Mountain is the only bluegrass band that specializes in cliff jumping. It’s always been a big part of our musical personality to be courageous and live a little dangerously on the musical side of things. I don’t think that vibe has changed at all. Now its more a matter of how we maintain and augment that vibe. To keep it positive.”

Band members are excited to return to Planet Bluegrass for another Kinfolk Celebration. “It means a lot. It’s a very powerful place for us,” Johnston said. “You’re going to get something there you are not going to get at any other place. There’s great camping, there’s a river. It’s a totally different and cool Colorado vibe that can’t be missed.”

Describing Kinfolk as a micro-festival, Johnston explains there is only one stage, so there isn’t a lot of distractions or the “overwhelming busyness” found at other festivals. “We like it like that. It feels like it’s a lot of our friends, a lot of our musical cohorts and partners in crime,” he said. “There are a lot of special things happening that weekend.”

One of those “special things” include Widespread Panic guitarist and vocalist John Bell who is on the bill to play a rare solo set and will join the band. “We’ve played with John before and have become friends,” Johnston said. “Now it’s like taking the relationship to another musical level, so we’re really pumped about that. We’re really flattered he’d come out.”

Also on the bill are Vince Herman and Drew Emmitt from Leftover Salmon. “We’re really psyched to see Vince and Drew, a couple of guys who helped make the Colorado music scene what it is today… real trailblazers. We’re really pumped to see them do a duet,” Johnson said.

Colorado acts like The Haunted Windchimes, Gipsy Moon and Head for the Hills are all scheduled to perform over the two-day event along with The Travelin’ McCourys whose members Jason Carter and Ronnie McCoury will join the band for a set. Guitarist Adam Aijala and bassist Ben Kaufmann also have an intimate show planned, Sept. 18, to celebrate the Mabon or autumnal equinox in the Wildflower Pavilion as they have since 2007. The show is for fans in the onsite campground only and no additional tickets will be sold.

The Kinfolk Celebration was created to give back to fans, who have shared a special relationship with the band for most of its 16 years. Although difficult to quantify how its been accomplished, members have always had the intension to go on stage and “put forth the idea that [the audience members] are just as important as the people playing,” Johnston explained. “It doesn’t feel like we’re going out of our way, but I do think people are feeling included,” he said. “I think that we present our music in such a way that people feel like they’re participating. We want to make you feel like you are included. That’s how we try to foster those fellings of community and friendship and connectivity. We want our fans to be connected to each other and we want them to be connected to us and the music. We think it’s a healthy, good thing.”

Long-time fan Tim Christensen—known by many as “Pastor Tim” since he leads a congregation in Butte, Montana—has been seeing the band since 1999 and has “been on the bus ever since.” Like many fans, he’s remained optimistic about recent changes. “I’ve tried to keep in mind that four of my favorite musicians in the whole world are all still alive, writing great songs, and playing incredible music,” he said. “I guess the way I look at it is that sometimes you have to release your grip on the past to be able to embrace what comes next. We had 16 years in one configuration, and now there’s something new going on and I’m going to catch every moment of it I can.

The “super-fan” has made it to all of the Yonder Mountain-led events at Planet Bluegrass and can’t wait to return this year. “Kinfolk Celebration is an amazing opportunity to hear great musicians with a crowd that truly appreciates both the music going on in front of them and the stunning setting of Planet Bluegrass.”

“I cried when I saw video of the St. Vrain destroying so much of what I’ve come to love about that community,” Christensen said. “But Lyons continues to rebuild, and I know a lot of musicians who have committed themselves to helping get that town back on its feet. Change is inevitable; some of it you can control and other parts of it you can’t, but if good comes out of it—and it sure has in Lyons—then maybe it’s a reminder that what can seem catastrophic at first is actually a chance for growth. I can’t wait to be a part of what Yonder and so many other great bands are doing to show their love to Lyons, to Planet Bluegrass, and to the people of the canyon as they work to rebuild.”

Last December, with a little help from Sam Bush and Jerry Douglas, Yonder Mountain String Band performed a benefit concert at the Boulder Theater to help Planet Bluegrass rebuild. The show allowed the band to donate $60,000 to pay for seven acres of sod which now cover the festival grounds. “We’re really excited to see the lawn at Planet Bluegrass is so green and beautiful like it once was,” Johnston said. We helped out the Planet, they helped us out. It all feels really good to be a part of all that. To lend a helping hand when one was needed.”

Following the festival, the band has a large fall tour planned that kicks off with their Harvest Festival in Ozark, Arkansas, Oct. 16-18 and show no signs of slowing down, of even missing a beat. “We really like what we’re doing,” Johnston said. “We’re trying not to get wrapped up in the idea of what permanent means. Right now with Ally and Jake, I feel like we have a really solid unit and it feels really good. It’s been really great and feels incredibly fun to have people helping out. Everyone is enjoying it, and being there is awesome.”

©MMAC Monthly – Published in September 2014 issue of the MMAC Monhtly