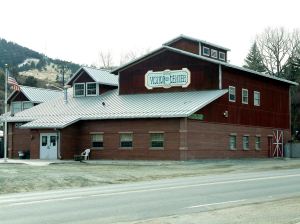 By Jeffrey V. Smith
IDAHO SPRINGS
The Historical Society of Idaho Springs has been preserving the legacy of its Clear Creek County namesake for 50 years, but they can’t do it alone. In an effort to raise funds for the coming year and a special project, the group holds its annual Golden Legacy Ball, Nov. 8, at the Ameristar Casino in Black Hawk. The evening includes cocktails, silent auction and open bar followed by a four-course dinner, live auction and band.

This year is the 20th annual gala, which is the Historical Society’s biggest fundraiser of the year. The first Legacy Ball was held at Loveland Ski Area then moved to Mt. Vernon Country Club in Golden for several years. Despite the “beautiful” views of Denver, according to Executive Director Nancy Johnson, it got very crowded. “We couldn’t have enough of an auction to support the gala, but the dining room was too small to get more people in there,” she said.

The ball was then moved to the Easter Seals Rocky Mountain Village near Empire for several years. “That was work,” Vice President of the Historical Society Board of Trustees Don Allen said. “We had to rent and set up all the tables. You’d party like hell on Saturday, then you’d have to go back and tear down Sunday.”

This will be the fourth year for the event at Ameristar Casino Resort & Spa, 111 Richmond St. in Black Hawk, where organizers can simply tell them how many tables they want and the color of linen, and everything is handled by the hotel. Last year the Historical Society began offering discounted rooms for the event. “We get a block of rooms they can rent through us,” Johnson said. “And, a lot of people really enjoy that because they can dance until the band is done and not have to drive home.”

The evening begins with cocktails, hors d’oeuvres, silent auction of items from local businesses and an open bar at 5:30 p.m. A formal, four-course dinner begins at 7 p.m. followed by a live auction with auctioneer. The evening concludes with live music from Waitin’ on Ray, one of Denver’s more exciting and fun dance bands playing “eclectic songs of yesterday and now.” The six-piece act is “the cover band that knows they’re a cover band,” capable of filling an evening with everything from Journey and Led Zeppelin to INXS and the Black-Eyed Peas.

The society’s director expects to sell out the 220-person ballroom this year as well as get major sponsors who are requested to contribute anything from $1,000 to $25,000. Small business representation is garnered as well with a $500 contribution level. “They help sponsor the cost of the gala,” Johnson said, “and everything else becomes a good donation to the project.”

Community members can support the event by purchasing tickets for $75 and bidding on any of the silent or live auction items at the ball.

The primarily the use of the funds, according to Johnson, is for things outside of administration and running the non-profit organization. Funds are also raised for a “special appeal,” which this year is the renovation of the Idaho Springs Heritage and Visitor Center. “This is the 20th year we’ve been in this building,” she said. “It needs to be repainted and we are trying to update all of the lighting to go to LED lighting.” Johnson explained they must update the lighting for environmental reasons and because many of the exhibits are “way too hot.” An evaluation last year determined there was too much heat from the lighting which makes the survival of textiles, taxidermy, papers and other items difficult. “The [LED] lighting saves in the long run and saves a lot on the environment, but it’s costly upfront,” she said.

For three years the group collected money for the Central Hose House, the largest of the Idaho Springs’ hose houses, through the ball’s special appeal and received a grant through the state historic fund. This allowed them to put about one quarter of a million dollars into the building even though it belongs to the citizens of Idaho Springs. Built in 1878, it served as the home for the city’s first hook and ladder cart as well as a meeting place for the firemen from all the city’s independent hose companies and other social functions. The restoration was completed in 2010.

“That’s why we have these things,” Johnson said. “It was literally leaning four feet and would not have been there much longer. Historical preservation of local artifacts is our primary purpose, and that’s what the gala does.”

Community members are encouraged to attend because it’s a fun evening and Idaho Springs’ history can’t be preserved without the help. “You have to remember your history, you have to remember who came here, but also if you want to preserve it, it’s going to cost money and we seem to be the organization that does that,” Johnson explained.

Originally published in the November 2014 issue of MMAC Monthly