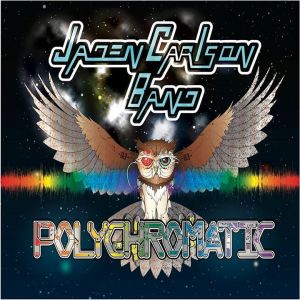 Popular Boulder-based teen-age guitarist and songwriter Jaden Carlson released her latest album with a full band in October. Jaden Carlson Band’s “Polychromatic” has met with critical acclaim and compares with musicians twice her age or more.

The album includes 10 original tracks. One highlight song, “Beyond These Walls,” features a solo by Coy Bowles of the Zac Brown Band.

The power-trio of funk, fusion and electronic music, is led by phenom guitarist Jaden Carlson; Will Trask on drums, percussion and backing vocals; and Eric Luba on left-hand bass, keys and backing vocals. The band, newly formed as of 2013, has spent much of the last year writing, recording and touring.

According to Carlson, finding the right sound and chemistry for the band came about almost by sheer luck. Trask had been subbing as a drummer for Carlson over the years, while Luba was brought on following a late-night jam at a house Trask was living in. Luba’s unique ability to simultaneously play bass with his left-hand and keys with his right provided the best possible addition to the sound that Jaden had been searching for.

The trio got together one afternoon in October to jam, and proceeded to play music all night long. The following days were spent doing the same, which created most of the material heard on the new album.

Produced by Joe Michaels, “Polychromatic” was recorded and mixed over four days. It was tracked at eTown Studio, produced and mixed at Scanhope Sound and mastered by David Glasser at Airshow.

“Polychromatic” can be previewed and purchased on iTunes, Amazon Music, Spotify and Google Play. It can also be purchased at jadensound.com where band information and tour dates can also be found.