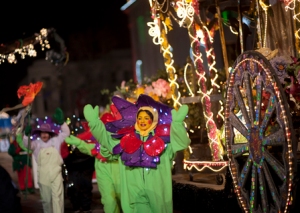 DENVER (October 27, 2014) – Denver becomes a magical place during the holiday season with parades, concerts, horse-drawn carriage rides, ice skating and some of the country’s most lavish and colorful lighting displays. The history of outdoor holiday lighting in The Mile High City even goes back 100 years – and the tradition continues through the 2014 holiday season.

The Story of Outdoor Christmas Lights in Denver
It was Christmas Eve 1914 and young David Jonathan Sturgeon was too ill to come downstairs to see the family tree. To make night a little brighter for his sick grandson, pioneering electrician D.D. Sturgeon dipped some clear light bulbs in green and red paint and strung them on primitive electric lines over an evergreen tree in the front yard.

The effect pleased not only the boy, but also the entire city of Denver. People came by horse-drawn carriages from miles away to see the brilliant, glowing tree. The Denver Post carried the story, which became the first written record of electric outdoor Christmas lights in Colorado.

Years later, when Denver decided to decorate the City & County Building with lights, D.D. Sturgeon was hired as a consultant. Today, the City & County Building lighting display is considered to be the largest single holiday spectacle in Colorado with tens of thousands of LED lights. It is just one of many light shows that brighten the skies over Denver during the holiday season.

Here are 10 reasons to plan a Mile High Holiday Weekend getaway in Denver:
1. Holiday Lights
· The Downtown Denver Grand Illumination on Nov. 28 illuminates downtown with 600,000 lights, all of which stay brightly lit every night through the end of the National Western Stock Show (Jan. 10-25, 2015). The massive display includes Denver’s newly restored 1914 Beaux Arts Union Station, which is flooded with colored lights. Other downtown spectacles include the mile long 16th Street Mall, where every tree is decorated with thousands of LED bulbs, and Civic Center Park with the brilliant lighting of the City & County Building. The perfect way to see the lights is from one of more than two dozen horse-drawn carriages, that clatter up and down the Mall nightly after 6 p.m.
· The Denver Botanic Gardens’ Blossoms of Light (Dec. 5, 2014 – Jan. 1, 2015), embraces the holidays with more than one million colorful lights spread throughout the gardens in whimsical displays. The gardens are a wonderful oasis in the center of the city, and never more so than during the holidays when the twisting paths become tunnels of twinkling lights.
· At Denver Zoo Lights (Dec.5, 2014 – Jan. 4, 2015), you can stroll through more than 38 acres of lights and see 150 animated animal sculptures. Don’t miss the Zoo Lights Lantern Festival, which takes place in Toyota Elephant Passage, the largest Asian bull elephant habitat in the nation.

The City’s largest shopping opportunities can be found at:
· Cherry Creek North, just three miles from downtown, offers 16 blocks of shopping and wonderful outdoor decorations. The tree-lined streets are home to more than 300 of the region’s finest boutiques, restaurants, galleries, salons, and spas – all just minutes from downtown Denver.
· As the region’s most popular shopping destination, Cherry Creek Shopping Center offers more than 160 stores and restaurants, including Nordstrom, Neiman Marcus, Macy’s and 40 others unique to the region. And don’t miss the big-guy himself, Santa, who appears daily in a wonderful holiday setting. Out-of-town guests can receive a complimentary Passport to Shopping at Guest Services – good for special offers at more 60 participating stores.

3. Holiday Stage Performances
The Denver Performing Arts Complex (second largest in the nation) comes alive for the holidays. Start a family holiday tradition by attending one of these classic productions filled with incredible sets, beautiful music and stunning choreography.
· There will be no “bah-humbugs” at the Denver Center for the Performing Arts’ musical version of A Christmas Carol (Nov. 28 – Dec. 28). Ever since Charles Dickens first penned A Christmas Carol in 1843, it has seen myriad stage adaptations and the popularity of this tale of redemption and second chances has seemingly never waned. From stage to screen, opera to one man show, it is one of the most influential Christmas shows and a traditional holiday outing that defines the joy of the Yuletide period for most of us.
· Now in its 54th year, Colorado Ballet’s Nutcracker (Nov. 29-Dec. 27) will be gracing the stage once again at the Ellie Caulkins Opera House, joined by the Colorado Ballet Orchestra. With a real wintry twist, the production promises to dazzle audiences with glittering snowflakes, shimmering sugarplum fairies, a real on-stage blizzard, unforgettable characters, stunning costumes and scenery by Jose Varon. This seasonal tradition features classic choreography paired with Tchaikovsky’s extraordinary score, performed live.
· Magnificent costumes and backgrounds set the whimsical stage for Dr. Seuss’ classic holiday tale, How the Grinch Stole Christmas! The Musical, featuring hit songs “You’re A Mean One Mr. Grinch” and “Welcome Christmas.” Don’t miss your chance to see this fantastic, family-friendly “Seussian” masterpiece in Denver from Dec. 17 through Dec. 28 at the Denver Center for Performing Arts.

4. Museum Exhibitions
Several only-in-Denver art exhibitions will be on display through the holiday season. Don’t forget to stop by the museums gift shops for unique, artist-made gift items for the people on your list.
· Nothing says the holidays like sparkling diamonds and jewels! The Denver Art Museum will host the world-exclusive exhibition of Brilliant: Cartier in the 20th Century (Nov. 16, 2014 – March 15, 2015) featuring striking jewelry, timepieces, and decorative objects produced between 1900 and 1975. This exhibition highlights Cartier’s rise to preeminence—and the historical events pushing the brand’s evolution—as it transformed itself into one of the world’s most prestigious names in jewelry and luxurious accessories.
· A world premiere art exhibition, Mark Mothersbaugh: Myopia (Oct. 31, 2014 – April 12, 2015) at Museum of Contemporary Art Denver, includes documentation and music from the artists’ DEVO days; prints, drawings, paintings, sculptures, rugs and video animations; performances; newly produced musical and sculptural installations; and most notably a life-long series of postcard-sized works, which will be exhibited in its entirety for the first time.
· Matisse and Friends (through Feb. 8, 2015) at the Denver Art Museum showcases showcases 14 paintings from the National Gallery of Art in Washington, D.C., from artists Henri Matisse, André Derain, Albert Marquet, Maurice de Vlaminck, Raoul Dufy, Georges Braque, and Kees Van Dongen.

5. Holiday Concerts
Denver’s hills and concert halls are alive with the sound of music every weekend in December.
· Experience the full majesty of Handel’s masterpiece, The Messiah (Dec. 13-14) – one of the most revered oratorios of all time – when the Colorado Symphony and Chorus exalt Messiah to new heights.
· Join the Colorado Symphony, Chorus, Colorado Children’s Chorale, vocalists and dancers in a program of your favorite traditional Christmas carols and songs for Colorado Christmas (Dec. 19).
· Tap your toes to your favorite holiday tunes at the TubaChristmas Concert (Dec. 21) at Skyline Park, featuring 300 tuba players from all over the region.

6. 9News Parade of Lights
The 9News Parade of Lights is the signature event of Denver’s holiday season, with thousands of sparkling lights, marching bands, giant balloons, majestic floats and delightful characters traveling through downtown Denver. The event will dazzle the crowds on Dec. 5 (8 p.m.) and Dec. 6 (6 p.m.). Viewing along the parade route is free; grandstand tickets are sold for seating in front of the beautifully illuminated City & County Building

7. Ice Skating
There’s nothing more magical than floating on ice at one of Denver’s FREE outdoor, ice-skating rinks during the holiday season.
· Located on the 16th St. Mall under the historic D&F Tower, the Southwest Rink at Skyline Park is open to the public with the option to bring your own skates or rent a pair at a minimal cost.
· The Rink at Belmar will celebrate winter solstice with an oversize ice castle, skating, live music and pre-holiday treats on Dec. 21, but you can enjoy shopping and free ice skating for the entire month of December!

8. Santa Sightings
Santa arrives in Denver by train, by sleigh – and even underwater!
· Santa will ride his sleigh into downtown Denver and set up shop in a magical wonderland in the Bull & Bear Courtyard on Larimer Square. Saturday from 10 a.m. to 7 p.m. and Sunday from 11 a.m. to 5 p.m. beginning on November 29.
· Santa will be at Cherry Creek Shopping Center through Dec. 24 for family photos and is available during all mall hours with limited breaks daily. Added bonus? You can even bring your pet for a photo with the big man on Sunday, Dec. 14 from 7-10 p.m.
· Santa goes underwater at the Downtown Aquarium, diving with sharks and sting rays on Dec. 13-14.