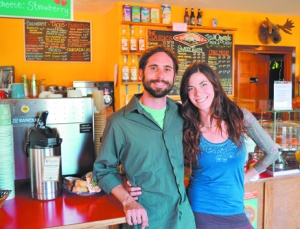 By Jeffrey V. Smith
NEDERLAND
Sometimes, when someone is open to it, the universe presents answer to life questions. Nick Morgan and Casey Kalista spent a night in March wondering if they had a future in Nederland, or if it was time to move on. The next day, long-time Happy Trails owner Randy Ruhl serendipitously decided Kalista was the “right person” in a years-long search to sell the business. By July, the couple had bought the coffee shop and fulfilled a dream.

Kalista started a love affair with coffee while still in high school working at a Marshall Field’s Department Store in her home state of Michigan.

“One morning the Starbucks personnel didn’t show up. I was the only one there and there was a line of people wanting coffee. I was like ‘OK, let’s do it.’ I just started figuring it out. Lord knows if any of those were any good, but that’s how it started.” She went on to work for Starbucks and stayed with the company when she moved to Chicago where she helped open stores as a supervisor.

“I worked my way up through the crazy bureaucracy of that company and realized corporate coffee was not what I was interested in—but, I loved coffee. I loved making it. I loved the interactions you have with people. I just really liked the environment.” After burning out on the corporate culture, Kalista left the company and began working various random jobs before finding herself on vacation in Prague, Czech Republic. The weeks-long trip turned into a four-year stay where she got back into coffee thanks to a pub job.

“It was an Irish bar with this beautiful espresso machine. I was just amazed by it,” she said. “It was real good coffee, so I started learning the culture a bit more. I learned the differences between American and European coffee and differences between French and Czech coffee. It’s just this crazy culture I began to delve into and become more interested in.”

Kalista moved directly to Nederland, where her sister lived, from Eastern Europe and found a job at New Moon Bakery, serving coffee among other things. When that job ran its course, she went to work at an aerospace engineering company, but she couldn’t do it. She came back to Nederland and started working for Ruhl. “I’ve tried a lot of other things in last 10 years, and just keep coming back to coffee,” she said.

Within a week, Ruhl offered Kalista the business. “He’d had it for 20 years (in May), and he’d decided awhile ago that he wanted to sell it,” she explained. “As he put it, he was waiting for the ‘right person to walk in the door.’ So, apparently I was that person.”

Although it was one of the couple’s future dreams, owning a coffee shop was not in their immediate plans. “We had just been spit-balling ideas about moving and our future together when she came home and said, ‘you’ll never guess the conversation I just had with Randy.’ It definitely threw me a little off guard,” Morgan said. “We talked about it extensively and decided it was something we could do, and that if we wanted to do it we’d have to get the ball rolling sooner than later.”

Once the couple had all of their “ducks in a row and could move forward,” they signed contracts with Ruhl. “And, then we just kind of hit the ground running,” Morgan said. “He had Happy Trails for 20 years… he had the bikes, had a partner, a lot happened. He was definitely ready to move on to pursue other endeavors and understood the place needed some fresh energy.” According to Morgan, they have been able to “dig our heals in and commit to it.”

It took some time for Morgan to decide it was the right move as he is just finishing his undergrad degree at University of Colorado, Boulder this December. His schoolwork is what brought the Iraq War veteran and Vermont native to Boulder and, ultimately, Nederland once he found he and his dogs needed a little “elbow room.” He began to develop a relationship with Kalista by making routine trips to New Moon for coffee.

“Happy Trails wasn’t in the cards in my life,” Morgan said. I’m studying ecology and evolutionary biology, so this has been a lot to put on our plate right now. At the end of the day, however, it was something we had talked about—that would be nice to have a little business up here and something to enjoy the fruits of our own labor.”

Once the couple decided it was time to tell Happy Trails customers they were taking over, they have been received with “open arms.” They’ve also seen many different faces that had never come in before. “They are saying the energy is different. It seems to have morphed into having people hang out,” Kalista said. “They want to sit down and they want to relax and enjoy their cup of coffee and see friends. It’s kind of like Cheers in here in the morning. It’s great.”

Morgan agrees. “It definitely does seem like a reinvigorated sense of community space here,” he said. “People have been overwhelmingly positive and supportive toward us and that’s made it all the more fun and lucrative in the end. People really appreciate the new energy.”

Also since the beginning, it has been important for the couple to “really engage into the community” and become “integrated with the people and all of our quirky nature.” They’ve begun to do this with special nights like Wine & Words, an open-mic poetry night, and a ladies clothing swap. “People ask us all the time if those things are lucrative, but it’s like we don’t really care. It doesn’t matter. It’s a space for the community to feel comfortable and to be involved in. It’s been good.”

The business is now known as Happy Trails Café and no longer has a bike shop in the back. There is now plenty of room to find a cozy spot throughout the building. They have expanded the menu that was strictly burritos and pastries. “We’ve added tacos, quesadillas and other platters—kind of Mexican street food,” Kalista explained.

They have also changed where they source their burritos and other food. “They are now all made locally, which is a big deal. Before they were coming up frozen from Boulder,” she said. “We’re really trying to reach out that way and bring in locally sourced items, so that’s been changing. People who were scrutinizing the menu before, I welcome them to come try again. We’ve gotten great feedback on all of that.”

The same thing goes for the coffee. “We kept our roaster, Conscious Coffees, whose slogan is ‘supporting communities not commodities,’ and we fully stand by that,” Kalista said. “We’re the only ones in town that roast with them.” The husband and wife team who own the company are very engaged in the process. “They even came in here and helped us change out the burrs on our grinder and the filters for water—making sure everything is up to date,” Morgan said. They’re awesome to work with and people love the coffee; we love the coffee.”

Since taking over, Kalista has done a lot of work on the equipment to “get it up to where it should be.” Eventually they like to purchase new equipment, but it’s just not in the cards as a start-up. “We’ve definitely made improvements with the coffee in how it looks, how it pours, everything,” she said.

When the weather warms back up in the spring, the couple plans to do more “deliberate” landscaping and fix the porch. They also hope to host more community events and perhaps offer acoustic music in afternoon during ski season. “It’s difficult to organize and maintain consistency and quality,” Morgan said. “A lot depends on what the community wants. We’re not going to shove a bunch of stuff down people throats and get mad when they don’t show up,”

Ultimately, Morgan and Kalista want people to know Happy Trails Café is for everyone. “There’s a space here for the business man, the college kid down the street… literally everyone,” Kalista said. “I just want people to know there is a space here for you. If it’s a snowy day and you can’t get down to work in Boulder, but don’t want to work out of your house, come make this your office. The WiFi works very well and it really is a safe space. Come and be you, come as you are, that’s what we want, we don’t want any false pretenses. We’re not trying to pretend to be anything but ourselves.”