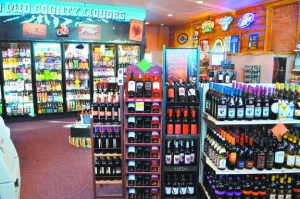 By Jennifer Pund
GILPIN COUNTY
Ten years ago this March, Jan Petersen opened Mid County Liquor in Gilpin County. With raffles, discounts for everyone, and new services beginning, March 7 is a big day. She has seen many changes over the years and has her sights and plans set toward the next ten.

Stop in, or drive through, Mid County Liquor up to the anniversary day, and receive a raffle ticket for a drawing on March 7 for prizes including a Fireball snowboard, Bud Light Broncos Neon Sign, Boulder Beer tour and more. Also on the anniversary, anyone who spends $10 or more is eligible to roll a pair of dice to determine a discount.

To make the day even more monumental, Petersen is unveiling a new delivery service to the nearby neighborhoods. For a $10 fee, and minimum purchase of $10, their driver will bring orders to doorsteps between Rollinsville and Missouri Lakes. Most area neighborhoods will be serviced depending on weather and other conditions.

When Mid-County Liquor opened in 1995, it was the only drive-through store around. Peterson says with all the growth and additional businesses in the county, they don’t feel so isolated anymore. “It’s not really in the middle of nowhere anymore,” she said, “but, there still are not services, including taxi or shuttles to help folks get around, that’s why we are doing delivery.”

Since moving into the store’s new space the middle of May 2014, Petersen has been pleased and excited to offer tastings twice a month. “It’s a new education for everybody,” she said. “A lot of people are learning about new products instead of just buying the normal thing. They’ve opened their minds to new and interesting things and they are getting an education rather than just the six pack of beer.”