By Jeffrey V. Smith
ESTES PARK
If anyone any single person can sum up the spirit of Estes Park’s annual Fiber Affair, it’s Neota Designs owner Deb Coombs. Not only does she craft original designs, clothes and accessories from wool and mohair yarn, she makes the hand-painted and dyed yarn for others to do the same. The long-time Estes Park resident has been weaving and running her business since 1978 and opened her store 12 years ago in March. She’s also has been very involved in local groups, like FACE of Fiber in the Rockies, that encourages and promotes the fiber arts in the Estes Valley.

The fiber artist moved to Estes Park in 1977, and took a weaving class at a store called The Spectrum owned by Glenna Danials, she said. “There was this thing around town called the learning exchange and you could take all kinds of classes, and I took stained glass and pottery, and I said that’s not good.” She continued on with her artistic pursuits.

Since Coombs had always wanted to weave, she found a weaving class, and that was it. “I bought a loom… in 1978, and was hooked from first class,” Coombs said. “I had interest, but no experience before I took the class. If you are going to learn weaving on a loom, you have to take a class. If you learn before a class, you suffer in some way.”

She is now known for her one-of-a-kind, hand-painted yarns—as well as hand-painted, hand-dyed hand-woven garments and accessories—and customers from all over the country purchase the yarn in the store and online for their own creations. She began creating the original yarns in the mid-90s so she could have what she wanted for weaving “and then it just kinda grew into it’s own thing,” she explained. 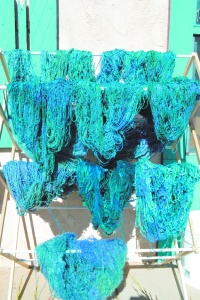 “When I started doing it, there weren’t that many people doing dying. There were two companies that I knew of, and I sent for their samples because I wanted to see what they were doing and I didn’t want to duplicate,” Coombs explained. “I had no idea how they were doing it.” One of the companies was using the same source of yarn she was, so she didn’t use any of the same yarns. “I got all different yarns and I just kind of went from there,” she explained, “and now we are called indie dyers and there are indie dyers all over the place.”

According to Coombs, her technique for painting the yarn is how it is so differently colored. “It is very labor intensive,” she said. “I have a formula for how I do mine, but some people will paint their color in blocks which ends up in segments of colors, which makes an interesting pattern, but you get streaks and stripes. My whole idea behind the painting— which took me a while to develop—is that it doesn’t streak or stripe. That’s what I wanted in my weaving. That was the original concept to use in my weaving.”

A batch of colored yarn can be created in a about a day, but it’s not easy. “I can do one color in an afternoon, and that’s like four hours of painting,” Coombs said. “And, that’s just painting. That’s not prepping or winding or drying or anything like that. Depending on the yarn, I can paint four skeins in an hour.”

Most of Coombs yarns can be used for weaving and knitting, but some aren’t good for knitting and a few aren’t good for weaving. “Overall, across the board they are good for both, and that is intentional,” she explained. “I have 18 colors of yarns, but am kind of maxed out with this variety of colors of what else I can do. I also carry organic cotton and alpaca in natural shades, the rest is hand painted.”

The store also sells hats, decorative elements like silk cocoons and a few things from other artists.

In addition to her store, the artist shows and sells her work at the annual Wool Market in Estes Park, June 13-14, and the Hand Weavers Guild of Boulder, Nov. 4-8. She was also “on the ground floor” of developing the annual Fiber Arts Council of Estes FACE of Fiber in the Rockies event, which is part of the annual Fiber Affair and Wool Market, now in its third year.

This year the exhibit—which has a theme of “Rocky Mountain National Park’s 100th Anniversary”—was open to all Colorado finer artists and is in a larger location at the Park Village Playhouse.

Originally published in the June 2015 issue of the MMAC Monthly