By Jennifer Pund
ROLLINSVILLE
If there is a town that knows how to throw a party, it’s Rollinsville, It wasn’t always that way, however, and that’s why the businesses and residents will gather on Aug. 22 to celebrate the 131st Rollinsville Independence Day. A traditional parade, specials at the Stagestop Market and Cafe and a free family-friendly party and pig roast at the Stage Stop Restaurant, will keep the celebration going all day.

Rollinsville’s founder, John Quincy Adams Rollins, owned most of the properties in town including the mill, and is credited for the construction of the 40- mile Rollins pass over the Divide. These  attributes gave Rollins and his wife Mary the ability to propose rules on everyone living in the town.

“It was Mary Rollins, teetotaler wife of the Town Founder, who directed him to rule the town with an iron fist,” said informal town mayor, Tim Underwood. “A teetotaler himself, he found no disagreement with direction. Such rules included (but not limited to) no drinking, no swearing, no spitting, and no jackasserie in general.”
When Mary passed away, these rules were lifted. “With that, came the reversal of all these formerly forbidden freedoms, and good cause for Town residents to celebrate their new found independence from tyranny. And that’s how, I am told, the tradition started,” said Underwood. 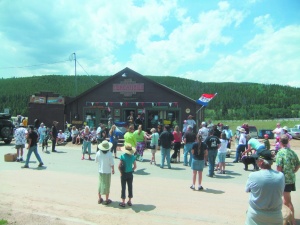 To mark the occasion, a parade, starting at noon, will travel from the Rollinsville Post Office, past Underwoods’ Mineshaft Mercantile to the Stage Stop Restaurant and Stagestop Market & Cafe for a full day of family fun. “Last year, Rollinsville Independence Day was my biggest day yet. Celebrating Rollinsville going wet seems appropriate for this area,” said Stagestop Market and Cafe owner, Megan Riley. Open 7 a.m. to 7 p.m., the market and cafe will offer $1 off cakes and coffee and a giveaway for free pieces of cheesecake.

The Stage Stop Restaurant will be open all day for its Rollyfest celebration featuring live music, three bars and a family fun-style pig roast.

“This will be my third August open, but my second doing ‘Rollyfest’ for the Rollinsville Independence Day,” said Heather Hatwan, owner of State Stop Restaurant. There is plenty to do with all three bars open; upstairs, downstairs, and an outside backyard bar with a bouncy castle for kids.

Seven bands are lined up to play for free and it’s not a Stage Stop party without a traditional pig roast, burlesque show and ariel acts. “It’s a lot of fun and you can bring your kids,” Hatwan explains. “I just want to create a fun, free, safe place for people and their families to come out, spend time together and the rest of the community.” Visit stagestoprollinsville.com for additional details.