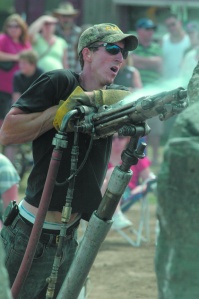 By Jennifer Pund
NEDERLAND
Ever since tungsten, silver and gold was found near Nederland in the late 1800s, mining has been part of the town’s history.  Nederland, meaning “low land” is where the  minerals found in Caribou Mines were milled. Miners’ Days, which celebrates this heritage, is a long standing tradition in Nederland and has been going strong for decades. In an effort to share this slice of Americana, the four-time Single-Jack Drilling World Champion Emmit Hoyl and his wife, Shivaun took over the leadership role and organize an entire weekend based around mining activities, contests, races and kids events.

Sharing Guercio Ball Field with Miners’ Day on Sept. 19-20, noon-6 p.m., Nederland Oktoberfest will also be celebrating with a Bavarian festival complete with a bike race, beer and bratwurst.

In 1885, the town was established and named after a Dutch owned mill located lower than the harsh conditions of the Caribou mine at about 10,000 feet. In 1874, the town was incorporated and adopted Nederland  as it’s official name, rejecting other known names like Middle Boulder, Brown’s Crossing and Dayton. Each year, Miners’ Days celebrates the history and skills of hard rock mining with competitions in jack leg drilling, bow sawing, mucking, spike driving and the highlight events, single and double jack rock drilling.

Ten years ago, Miners’ Days started Hoyl—a recent Gilpin County resident and firefighter—competing across the state. He quickly become a four-time world champion in single jack drilling, an historic method to drilling holes in solid rock where the miner strikes a chisel held by one hand, while swinging a four pound hammer in the other. The miner then rotates the chisel 90 degrees before striking it again, sometimes hitting as much as 90 times a minute.

“I stumbled across [Miners’ Days] as I was driving through town, and I decided to stop and take a look,” Hoyl said. “I had done the events as a little kid with one of my good friends. But I never did any of the drilling events.” Being a fifth generation miner, he had just returned from getting a degree in blacksmithing in the U.K. and knew he had the arm strength to compete. “I borrowed a set of drill steels and entered into the single jack drilling contest and did pretty well. So, that kept me going. There is a whole circuit of competitions around. I try to go to as many as I can in the summer.”

Hoyl takes some slack about running an event that he’s so good at, but he is quick to dispel any rumors. “People kind of give me grief about putting on an event so I can win it, That’s not really it at all,” he explained. “If I didn’t step up, it wasn’t going to be done. So, between myself and my wife, we were able to get everything organized and get people together. It’s a lot of work.”

The Hoyls say they do it because they feel the event is important to the town’s history as the longest continually run athletic event in Nederland. “I just want to be sure this tradition can continue on, it’s very significant to our history,” he said.  “It has occurred in Nederland for over 100 years now, and it’s more representative of where our town has come from compared to some of the other big events that go on in town.  I just want people, both tourists and residents, to experience a little bit of that Americana that is Nederland. I think it does that.”

During the event, spectators can watch professionals compete in events like spike driving, jackleg drilling, mucking as well as the big events single and double-jack drilling for cash prizes, or they can get involved themselves. “We have a lot of great events that locals can get their hands into,” Hoyl said. “We encourage locals to participate, so come down and look for opportunities to compete and win cash prizes.”

Kids are also welcome to participate in the kids mucking, panning for gold and watermelon eating contests. “There are a variety of events both days for the children and they keep their hands full and do a bunch of fun stuff. It’s a lot of fun to watch those guys do their thing,” Hoyl said. “We toss a huge load of sawdust out in the field, throw a bunch of quarters and nickels into the mix and kids spend literally hours sifting through all the sawdust and wood shavings to try and find money.”

When Hoyl and Rob Quinn, founder of Nederland Oktoberfest Bike Race and Bavarian Celebration, discovered they both wanted the same weekend for their perspective festivals, the two decided to team up. “After we tried to shoot for the same weekend, we decided to do it together because I think they can work well with each other. We will have beers and brats and music in addition to the traditional miners day festival that we’ve had for a number of years now,” he said. “ it just made perfect sense.”

Spectators are welcome to enjoy the beer and brats. Music will be provided by Gasoline Lollipops and Zoltan and begins at noon both days. “We encourage people to come down and check out the free event, check out the competitions and enjoy some music and food and beer and just watch the historic reenactment of old mining competitions in Nederland.”

Other weekend events include a Nederland Senior Pancake Breakfast at the Community Center from 8-11 a.m., the Mining Museum and Historic Gillespie House tours as well as vendors at the ball field both days.

Originally published in the September 2015 issue of the MMAC Monthly