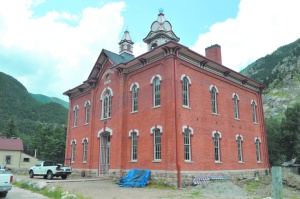 By Jeffrey V. Smith
GEORGETOWN
A deteriorating “rotten apple” in the middle of one of the state’s more prominent historic districts has been transformed back into the “pride of Georgetown.” It wasn’t easy, or quick, but the combined effort of many—including more than 8 years of challenging restoration work—has returned the 1874 Georgetown School into a dynamic, public space. Known as the Georgetown Heritage Center, it was created to be a place to celebrate the town’s past, exhibit and practice traditional arts, enjoy live performances and hold meetings and conferences.

Located within the Georgetown and Silver Plume National Historic Landmark District, the structure—which sat in a deteriorated condition for more than 60 years—is believed to be one of Colorado’s oldest brick schoolhouse buildings. It is one of only two pre-1880 masonry schools remaining in Colorado and is highly visible along one of Georgetown’s main avenues and from Interstate 70.

The building served the community as a school until 1938.  It was sold into private ownership in 1946 with plans for its use as a mining museum. When those plans did not materialize, it was used for storage and a machine shop and part of one side was demolished for truck access. In recognition of its growing fragile condition and its importance to the landmark district, Colorado Preservation, Inc. listed the school on the Endangered Places list in 2006.

In 2007, the Georgetown Trust for Conservation and Preservation acquired the property with funds from the State Historical Fund and more than 200 individual donors. The all-volunteer group began the long road toward bringing the building back to public use immediately. “The Heritage Center idea and concept, as an adaptive use for a restored structure, evolved out of our citizens saying that was our public school and we want it to continue to have a public use,” Executive Director Georgetown Trust for Preservation and Conservation Cynthia Neely said. “Conceivably we could have put lofts in it, made it a totally different use and just said, we restored the outside, we are done. We could have done that, but the citizens of Georgetown—coming to open houses as we were restoring—said they would really like to see this have a public use, and have a use that relates to the history of our town.”

Purchasing and renovating the 1874 Schoolhouse allows the Georgetown Trust to do even more to highlight the landmark district, its history and its assets. It has also been long time dream of  Neely and her late husband, who were some of the founders of Historic Georgetown. “I’ve been at this for 45 years. It’s what I do,” she said. “This building sat. It was in private hands. It was beaten up. It was not taken care of, and it was in terrible shape. Every decade we would try to figure out how to convince them to sell it to us. That finally happened in 2007—it took a long time. You get persistent; I mean there were many other things to do in this district.” 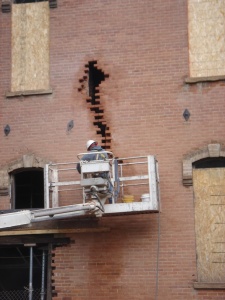 Once acquired, complete restoration of the exterior began that summer. The project became a “learning experience for everyone involved” and during the exterior restoration, the Colorado Mountain College Technical Preservation Program was used to assess and assist in restoring 36 large exterior windows. The building’s reconstructed vent towers and bell tower were created by examining historic photographs and “proved to be a fascinating exercise,” according to members. “I didn’t think we would ever get the towers back,” Neely said “That was the donation of a single person who said ‘you need to have towers.’ The State Historical Fund wouldn’t pay. They helped hugely with the building, but they weren’t going to do the towers [even though] the towers just set the whole place off. Out of no place, the money came. It pays to answer the phone.”

Restoration was conducted in three phases over the following years, beginning with the roof, eaves and gutters.  A National Park Service “Saving America’s Treasures” grant was awarded to the restoration, and in 2008, structural reinforcement, asbestos abatement, compression grouting and restoration of exterior brick, stone, window and doors was completed. The final phase in 2009 included restoring the historic exterior paint colors, and reconstructing the towers. Long Hoeft Architects, Hoehn Architects, Building Restoration Specialties and Silver Plume Home Services completed the work.

The process was not easy, even from the start. “Four days after we gained possession of [the building] we found crystallized dynamite in the basement,” Neely said. “Old buildings can have lots of really weird things in them. It could have blown the place up. We had already found all kinds of dynamite caps in the school; I mean the Gilpin County Bomb Squad were becoming my best friends.”

When the exterior was finished, the massive interior renovation began. The floors of the old building were worn and desk marks from decades earlier remained. One challenge was to try and save the marks, while creating a usable space.

Everyone agrees, the project turned out better than anticipated, despite the long wait. “People stop in the middle of the street and get out of their cars. It’s incredible,” Neely explained. “To some people it’s such an emotional issue all they can do is look at me and just shake their heads. It’s totally wonderful.”

The Georgetown Heritage Center now offers three classrooms and a conference room on the first floor. The second floor features a 100-seat performance space with platform, screen, projection and audio equipment. Restrooms and a break room suitable for catering staging are in the full basement. The building is handicapped accessible as all floors are served by an elevator.

The anchor of the Heritage Center is a Local History Archive—the records, photographs, maps and other documentation of Georgetown’s past—which is owned and operated by the Clear Creek County Library District. “The library is leasing space with us to put in an historic archive,” Neely explained. “[It] has been collecting things people have been giving them in the way of documentation for years, and we need to find a home for this stuff. To have an archive in there fits perfectly with our purpose.” The local John Tomay Memorial Library will also use the center for film and children’s programs.

A Cultural Arts Program will use the first floor classrooms to “demonstrate, teach, and exhibit traditional folk arts and their modern adaptations, and provide cultural programming that was practiced and enjoyed by the diverse groups who created Georgetown during the 19th century mining boom.” Programs include local, regional, and visiting participants, and invite participation by school and senior groups. 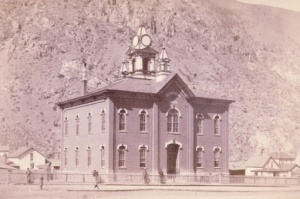 The Cultural Arts Program is a new way for the group to “promote the heritage folk and performance arts reflective of the Georgetown-Silver Plume National Historic Landmark District,” from 19th century life to today. “We’ve tried over the years with a new concert series, a lecture series and those kinds of things,” Neely said, “but this is the first concerted effort to do workshops in the fine and folk art world. We are looking at 19th century culture, we are not teaching quilting the way it was done in the 19th century, but we are teaching you quilting because it is a tradition.”

The program will offer a range of programming including traditional crafts, fine arts, music, drama, film and gardening because “that’s the only way to make it work,” Neely explained. “We are not strictly an arts center,” she said. “The idea is to be broadly cultural. This isn’t the fine art place, we don’t have artists studios. This is a place for exhibit, workshop and performance events.”

The Colorado State University Extension Service Master Gardener program has created a local demonstration garden on the grounds, and will hold regular gardening classes. “We just happen to have a perfect corner for [the garden],” Neely said.

The second-floor performance space—said to be Georgetown’s “best”—will host concerts and performance events. According to Neely, a local group “raised an incredible about of money” to buy a concert-level baby grand piano for the venue. Classical Concert Pianist Michael Gurt, who has performed as soloist with orchestras around the world, will christen the room and piano, Oct 3 at 7 p.m., during a Champagne reception benefit.

“This restoration would not be possible if this state didn’t have the State Historical Fund,” Neely said. “They have poured money into every county in this state, mostly in the small towns for people who are trying to do what we are doing. It’s an amazing amount of economic development. Everybody thinks historical funds are just for saving these old things. No. That’s not what’s happening here. They are revitalizing downtowns and all kinds of stuff.”

While the new center gives residents of the small town additional cultural activities close to home, it is also important for tourism purposes. “Aligning preservation with economic development has served Georgetown well by creating an authentic destination bringing in visitors to shop, dine, and explore the historic district,” a letter from the Trust explains. It is anticipated future uses of the schoolhouse will bring new visitors interested in the area’s mining heritage and add to the town’s economic vitality.

“For the town of Georgetown, and for this landmark district, it is also part of economic sustainability,” Neely said. “People come here for heritage tours. They come here to see what the town looks like and to experience pieces of the past.” Thanks to the dedicated efforts of the Georgetown Trust to bring the 1874 Schoolhouse back from the brink, residents and visitors alike will have the opportunity to experience and learn from the area’s rich history.

The Georgetown Heritage Center is located at 809 Taos St. Visit georgetowntrust.org, e-mail info@georgetownheritagecenter.org or call 303.569.0289 to learn more. The Georgetown Trust is located in the Gateway Visitor Center building.

Originally published in the September 2015 issue of the MMAC Monthly