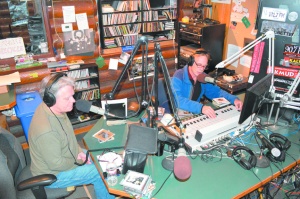 By Jennifer Pund
IDAHO SPRINGS
KYGT in Clear Creek County, affectionately know as “the Goat,” is “community radio at it’s best,” according to Phyllis Adams, president of the station’s Board of Directors. This year, Clear Creek County’s only broadcast radio station is beginning a new program to raise money for the station featuring a membership drive the entire month of October and inaugural gala with a silent auction. Hilldaddy’s WildFire Restaurant hosts the first KYGT Gala, Oct. 24 starting at 6 p.m. Tickets include an opportunity to bid on items in the silent auction, dine on a buffet dinner and support a valuable community recourse.

The public radio station is community-owned and operated that is all about “music, rhythms and the Clear Creek attitude: laid back and in tune with the community.” The station can be heard around Clear Creek County on the radio on 102.7 and 103.9, streaming live online at www.kygt.org or on any handheld device using the Tune-In app. In addition to keeping the Clear Creek Valley Communities educated, informed, entertained and alerted, KYGT also provides a format for residents of the community to express their creative talents and volunteer in a way that directly improves the community’s quality of life.

“Most people have heard the term ‘community radio,’ but KYGT is truly community radio at it’s best,” Adams said. “It’s been on the air for 20 years and there is something for everyone. We don’t have a playlist, so DJs are free to play from their own playlist, although the station does house quite a collection of vinyl.” With the addition of a new translator on Bellevue Mountain, Adams explained that for the first time in 20 years, KYGT is truly Clear Creek Radio. “It’s a community radio station. We have some of the most unique programming on the Front Range and it is about the community.” 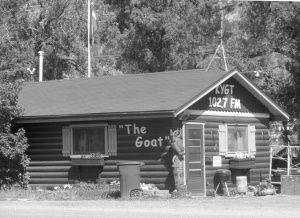 Members of the Board of Directors recently decided the station needs to move away from funding that comes solely through sponsorships. “It’s wonderful to have sponsors, and we certainly appreciate every single one of them, but I’d like us to have more. For the very affordable rates we charge, we’d need three to four times as many. There wouldn’t be any time for music,” Adams said.

The station has historically been supported by grants, but funding for operations costs are hard to come by. “We have to find other ways to bring in larger chucks of money. Some things we need money for you simply can’t get grants for, like operating costs. We need to get the community more involved.”

When looking for different ways for the station to make money, the group decided on an Annual KYGT Gala,  as a way to grow towards their goal. “Many of us are familiar with what our Historical Society has done for the last 21 years with their popular gala,” Adams said. “I have worked with them and have helped organize it, so I know a little about the background work that’s involved, so we just decided to do a mini version of that, a Goat Gala, although the word ‘gala’ associated with the radio station just makes me laugh.”

Along with the party, Adams said the group concluded, “we are community radio, let’s be like the big guys, NPR and PBS, and have a membership drive. Then it occurred to me to put the two ideas together and have a Goat Gala to it kick off,” Adams said.

Come be one of the first members of KYGT and benefit from getting in on the first drive at the kick off party, The Goat Gala October 24, tickets are $30. Although details are still being worked out, the event will feature a buffet dinner, cash bar and silent auction. “The station has grown over the years and is something the community can be proud of,” Adams said. “They should want to support it and do what they can to see it keep going.”

Visit the station website for more information about KYGT, programming, the gala or any other questions about donating or volunteering can be directed to Phyllis Adams at montanepros@juno.com, station manager, Greg Markle at kygt66@msn.com or by phoning the station directly.

Originally published in the October 2015 issue of the MMAC Monthly