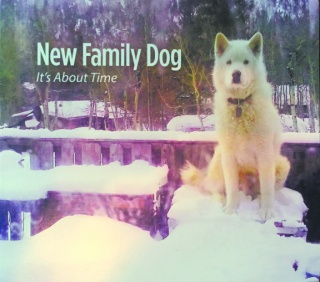 By Jeffrey V. Smith
Nederland-based guitarist and songwriter Jon Ridnell has been playing music with his son, Miles, for as long as he can remember, but since Miles graduated from high school a few years ago, the two have been working professionally much more often. Miles plays bass in his dad’s New Family Dog project, which has been playing a “progressive, funky, jam, weirdness” mix of styles for about three years. It also includes Steve Saviano on drums and Pete Goldberg on keyboards.

New Family Dog recently released its first studio album, It’s About Time. The title has a couple of meanings to Ridnell. “Honestly, I feel like this is the best band I have been in in years,” he said. “It kind of took me being in a band with my son to do it. So, it’s about time I got a good band together. “

More than anything Ridnell made the album to have a band with his son, “which is a really cool thing and it’s been really fun.” This is his first album with his son. “We have a lot of material, we got a good band together, so we just wanted to do a record. He is my best critic at this point,’ Ridnell said. “He would tell me if something sucked when we were recording tracks, which is good. It’s a really special thing, creating music with him. We do a lot of singing together and a lot of bluegrass gigs together. He is really learning a lot. I feel like I am giving him something good.”

Miles is also credited with recording, along with Saviano, and mixing, along with Sally Van Meter, the new disc. “Mixing with Sally was so awesome. He learned so much and with David Glasser [at Airshow Mastering] as well. It was an awesome experience,” Ridnell said. “I think after this experience, Miles has learned he doesn’t want to go into recording. He’s a player, like me, but he does have that skill now. He played, and at the end he was editing and mixing, he did the whole thing. I don’t know how he did it all. I don’t even have a computer.”

The album includes several special guests including the Mile High Horns, Paul Stadler on saxophone, Cecil “Pnut” Daniels on EWI and Sally Van Meter on lap steel. “The horns I just love,” Ridnell said. “We are trying to do as many gigs as we can with them, when we can afford them. It just adds so much, and I really enjoy writing charts and stuff. And, Sally is just a frickin’ genius, so any time I get to work with her is just an honor. She definitely helped make [the album] sound a lot better.”

Ridnell is also a long-time fan of Daniels, who recently relocated to Denver. “[He] is just awesome,” he said. “We have been working with him for years. He is a one-of-a-kind musician. He can play about 40 instruments on this midi horn that he plays, and he does a trumpet solo on the 4th track, Saberachi. He’s a drummer, too, so he’ll play percussion too.

The musician says It’s About Time is “definitely” one of the more jazzier band albums he’s ever done. “It’s got a lot of everything on it, which I think is cool, Ridnell explained, “but it’s a lot more complicated music. The Band wrote a lot of it together. I have done a lot of albums, but they were never with a real band. We would hire great musicians to play on the record, but it wasn’t a real band. So there is something to say about having a real band with everyone on the record.”

Some of the material on the album is older, but it is “mostly newer stuff” written by the band. “Miles directs me,” Ridnell said, “Honestly I do whatever my son says. He makes me play what he considers my best songs over and over again, where I would just play all different songs when I play out. So, he is trying to hone me in a little bit. We are pretty proud of the CD, and I hope it is the first of many with this band.”

Originally published in the December 2015 issue of the MMAC Monthly