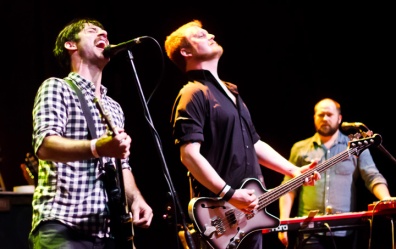 ESTES PARK
Murder by Death, a Bloomington, Indiana-based indie rock band, returns to the Stanley Hotel, Jan. 15-17, for its third, three-night semi-formal ball. The band’s excited fans sold out all performances almost immediately, but even if you don’t have a ticket, there is still plenty to get excited about with a new cover album and performances with Tim Barry at the Fox Theater in Boulder on March 29 and The Black Sheep in Colorado Springs on March 30.

They may call Indiana, home, but since its formation, Murder by Death have been a band without musical borders. The band’s signature sound is rootsy indie rock, cinematic Gothic ballads and rousing pub rock shout-alongs. It is a band of meticulous and literary songwriters matched by a specific brand of brooding, anthem-riding balladry and orchestral indie rock. Theirs is a world where Old West murder ballads mingle with rock-injected Western classicism; where an album’s sequencing can take listeners from a haunted back alley in rural Mexico to a raucous Irish pub. All of which is to say, Murder by Death albums don’t just string together songs; they create experiences.

The band issued its 2001 self-titled EP under its original name, Little Joe Gould, before eventually changing its name to Murder by Death, taken from a 1976 Neil Simon comedy. The band’s members felt the new name better represented their sound, which mixes elements of Johnny Cash, Nick Cave & the Bad Seeds and the Decemberists.

Murder By Death began as a Midwestern college-town act playing to small crowds at ratty venues and house parties. While many of their peers failed to make it far, Murder By Death translated their anonymous beginnings into a 15 year career of tireless D.I.Y. touring and performing ethics and a dedicated, cult-like fanbase.

Since the band began in 2001, its audience has blossomed thanks to extended tours alongside similarly acts like Against Me!, Gaslight Anthem, Lucero, William Elliott Whitmore, Ha Ha Tonka and others. With relentless touring across the United States, Canada and Europe, the band has gained word-of-mouth devotees and media support.

The act’s energetic, unique and consistent sound and conceptualized vision is what attracts many of the band’s fans. The personnel and ingredients of the group consist of Sarah Balliet’s throaty cello melodies; singer and guitarist Adam Turla’s booming baritone vocals and brawny guitar strumming; drummer Dagan Thogerson and bassist Matt Armstrong’s locked-down, post-punk rhythm section interplay; and David Fountain’s multi-instrumentalist bag of tricks including piano, trumpet, accordion, mandolin, vocals and percussion. The overriding sound is an amalgamation of textures ranging from dark and desolate to upbeat and brightly melodic, all of it landing somewhere under the orchestrated indie rock umbrella.

The other mainstay signature element of Murder By Death’s identity has been built by the overriding concepts behind each individual album. Every successive effort conjures up fresh imaginative and tactile worlds—whether it’s the battle between the Devil and a small Western town on 2003’s “Who Will Survive and What Will Be Left of Them?,” an arid land of death and redemption on 2006’s “In Bocca al Lupo,” or just songs inspired by a retreat into the Tennessee mountains like on 2010’s “Good Morning, Magpie.”

Murder By Death recently released its “As You Wish: Kickstarter Covers Vol. 2” in December. The digital album includes cover songs picked by fans by acts like Talking Heads, David Bowie, The Gaslight Anthem, The Tragically Hip, Jewel and many more.

The band’s latest, and seventh, full-length album, “Big Dark Love,” came out in February 2015 on Bloodshot Records. It was the band’s first since 2012. For an act that has built its formidable, 15-year career around a meticulous consideration for the effects of pressure, release, bombast, ecstasy, and highest-highs vs. lowest-lows, it is something to say that this is Murder By Death’s most dynamic release to date. “Big Dark Love” reflects a different, bigger, more complex side of the band.

Plan ahead if you want to catch the band’s Colorado shows in March, as those are sure to sell out as well. In the meantime, check out the latest Murder By Death music on the band’s website.

Originally published in the January 2016 issue of the MMAC Monthly