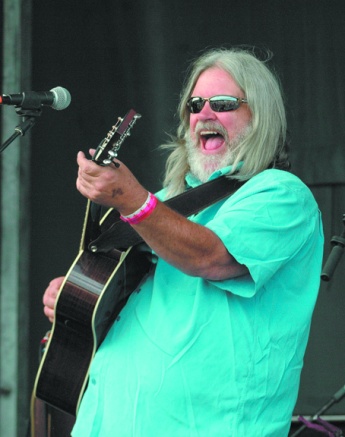 By Jeffrey V. Smith
ESTES PARK
“Some places are like people: some shine and some don’t.” The same can be said for bands. The famous line from Stanley Kubric’s The Shining—adapted from Stephen King’s novel inspired by The Stanley Hotel in Estes Park—is also a perfect way to define Colorado’s Leftover Salmon. Since 1989, the band has stood out from the rest, not only as pioneers of the jamband movement, but as musical beacons creating an original synthesis of styles, while channeling the spirits of bluegrass legends long past. They have led the way for a generation of jamgrass acts and left a lasting impac as the genre’s “unwitting architects.”

As the band begins its 26th year, it is rewarding fans for decades of support with a return to The Stanley Hotel for a “first class, intimate experience including a full weekend of music, wining, dining and more.” Special guests and activities are also part of the three-night-run.

“It’s really great to just be there for the whole weekend,” co-founder Vince Herman said. “It’s a small enough capacity that you can really spend time with everybody. Sometimes, you get to go to a festival and stay for the weekend… but, often there’s 10,000 people there. With the Stanley, you actually get to feel like a cohesive group of people and all interact together. It’s really a unique setting and a little more luxurious than camping in a tent.”

Herman was leading the Salmon Heads in the late 1980s when he asked Drew Emmitt, mandolin player of the Left Hand String Band to fill for a missing member at a show in Crested Butte. Together, they took the name Leftover Salmon and played their first show in the mountain town before going on to explode on the Colorado, regional, then national scenes. According to Emmitt, they were just following in the footsteps of New Grass Revival, Hot Rize and Little Feat.

The lineup changed over the years, but the foundation has always been rooted in co-founders Herman, Emmitt and banjoist Mark Vann, who they met at the Telluride Bluegrass Festival during a campground jam. Vann passed away from cancer on March 4, 2002, but the band carried on with Matt Flinner, Scott Vestal, Tony Furtado and Noam Pikelny, before taking a hiatus from 2005 to mid-2007. When Salmon returned, banjo phenom Andy Thorn was on the team.

Despite the abundant talent in the band, Herman is as surprised as anyone they are still doing what they do. “We never thought we could pull this off,” he said. “If we did we could have thought of a much better name. It came together accidentally, and it’s all one big happy situation over the years. We never really had much of a marketing plan or an overall picture. We kind of just go out and play and do that thing that we do which is play live music and occasionally making records.

The Stanley Hotel weekend includes late night post-Salmon shows with Gipsy Moon and a band put together by Robinson as well as an acoustic pick hosted by Herman. A Bloody Mary bar with tunes by Garrison and his jazz ensemble kicks off Sunday. There is also a “Mystery Matinee Show” that will “freak you out” to add an element of surprise.

Beyond all the music, take a trip through Jay Blakesberg‘s storied career as a rock photographer with a slideshow and storytelling presentation documenting his time with the Grateful Dead to his latest project. A book signing follows. Scramble Campbell, who will be on site throughout the weekend capturing the event with his paintbrush, has an art show planned, too.

Following the Estes Park shows, Leftover Salmon hits the road to play Durango, March 15-16; Telluride, March 17-18; Crested Butte, March 19 and Aspen, March 20 before a national tour. Leftover Salmon is back in Colorado for the Telluride Bluegrass Festival June 16-19 and a headlining gig at Red Rocks with Greensky Bluegrass on July 23. View the full tour and ticket information on the band’s website.

“We are getting back to our roots… we played Telluride for our second gig [ever] after Crested Butte, then we went down to Durango,” Herman said. “We love ski towns and the rowdy people that show up at them. It’s good to check in and see what’s left of ski bum culture. It’s different than it was than 25 years ago, that’s for sure. All the mountain towns have changed. You can’t even have a beard and run a ski lift anymore.”

Herman is especially fond of Telluride which lured him to Colorado from West Virginia. “Back in 1985, I had friends who were making the drive out to Telluride for the festival from West Virginia because it really defined the newgrass genre… with the wide open progressive bluegrass stuff that was going on out there.”

The Red Rocks show is also going to be a summer highlight. “We love Red Rocks,” Herman said. “It’s just an awesome place, and Greensky is awesome. Great energy, great fans, really fun cats to hang with and good friends. I am really looking forward to that. That’s a fun day.”

The Stanley Hotel is located at 333 Wonderview Ave. in Estes Park. Visit www.stanleyhotel.com and Leftoversalmon.com to learn more.