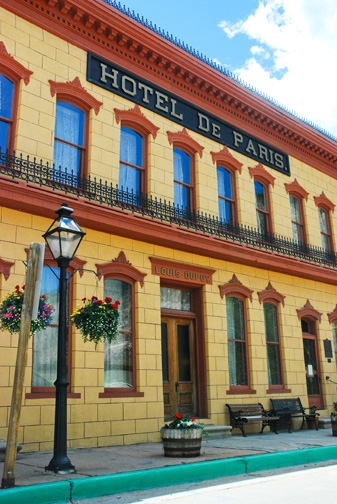 By Jennifer Pund
GEORGETOWN
Celebrating 50 years as a Site of the National Trust for Historic Preservation, the Hotel de Paris opens it’s tour season to the public in May allowing visitors access to more than 5,000 objects original to the site. Through the use of the newly developed “visible storage” in the hotel’s 1878 commercial kitchen, visitors can view hand-panted French tableware, common kitchen tools, and pressed glassware that was once stored away and hidden from pubic view. These items contribute to convey the dramatic tale of Louis Dupuy and his rise from a cook at a hard working labor camp to celebrated chef and renowned restaurateur.

“When the unpacked furnishings are seen by the public, they will easily discover why Hotel de Paris has been described as the most complete historic parcel in Colorado,” the museum’s Executive Director Kevin Kuharic said. “My favorite part of this year’s programming is maintaining the theme of unpacking, much like a traveler. The museum staff and volunteers have been unpacking stories about people who worked, dined and slept [at the hotel]. Then it dawned on us that we could also unpack portions of the artifact collection that have been in kept out of sight in a secured archives. The expanded exhibit of the collections’ items is allowing us to better illustrate the experiences of our key and secondary historical figures,” Kuharic explained. Visitors marvel at the abundance of objects original to the site in 1901. 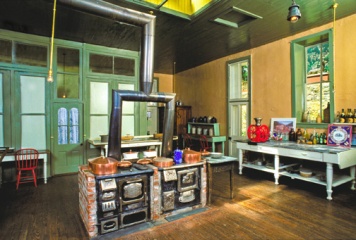 Older than Colorado itself, the Hotel de Paris, located at 409 6th St. in Georgetown, began in 1875 and offered a first-class French restaurant, showrooms for traveling salesmen and luxurious lodging. It catered to the wealthy businessmen, railroad tycoons, mining investors, and outdoor adventure seekers during the “Gilded Age.” At the time, the hotel entertained many noble guests from George and Jay Gould – father and son railroad executives- and more celebrated figures like Countess Magri – born Mercy Lavinia Warren Bump—wife of Italian Count Primo Magri and widow of the late General Tom Thumb.

After the ‘Silver Panic’ of 1893, Hotel de Paris began a steady decline. In 1954, it was purchased and opened as a museum. Restored period rooms showcase the site’s original furnishings, which are faithfully arranged. Visitors are immersed in a setting of authenticity, which provides a fascinating window into the lives of the hotel’s proprietors, workers, builders, and guests.

Hotel de Paris is a place of second chances, Kuharic said, and he is still amazed by what they are finding. “In the 1950s, CBS TV executives found our story of reinvention so compelling they developed a Western series titled, “Hotel de Paree.” No matter who you are, you will most likely be able to see yourself in our stories of human foibles and successes,” he said. “The biggest surprise [is that] we have not nearly exhausted our understanding of the site, even after 62 years of scholarly research.”

The cellar is an area of the hotel not to be missed, according to Kuharic. “You can still spy in the mortar handprints of Chinese laborers who excavated and built the hotel’s 1882 and 1889 additions.”

This year marks the 50-year “Golden Jubilee” anniversary of the Georgetown-Silver Plume National Historic Landmark District designation. Anne Marie Cannon, Director of Museum Collections with Historic Georgetown said, “Keep an eye out for all the different ways Georgetown and Silver Plume will be telling the story of this important designation and celebrating throughout the year.”

The Hotel de Paris is open daily May 28 through Sept. 30 and on weekends Oct. 1 through Dec. 11. General Admission is $7. Look for discounts for youths, seniors, active military and their families, AAA and members of the National Trust for Historic Preservation.

The Hotel de Paris Museum is owned and operated by The National Society of The Colonial Dames of America in the State of Colorado. Free parking is available next to the museum.

Originally published in the May 2016 issue of the MMAC Monthly