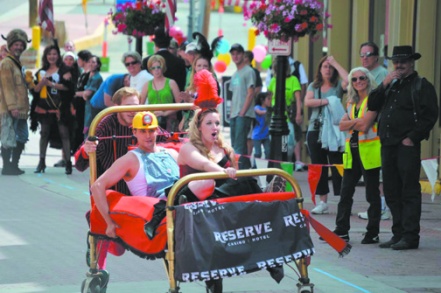 By Jennifer Pund
CENTRAL CITY
Every year, on the third Saturday in June, Central City throws a street party to celebrate Madam Lou Bunch, one of its most infamous residents. Steeped in tradition, Lou Bunch Day, June 18, includes world-famous bed races, the Madam & Miners Ball and live entertainment. Giving the event its color are the dedicated local’s in the Sporting House Girls—managed by Sandra Hines—performing dance routines and skits and the Wild Bunch—including Mike Keeler—entertaining with Old West street shoot-outs.

The day’s centerpiece, the highly-anticipated Famous Bed Races, have been run for more than 40 years. They feature teams of three— two men and one woman— pushing a brass bed on wheels down, and back up, Main Street for the fastest time. Winners gets a cash prize and bragging rights for the year. Everyone has fun.

The races were first run during the filming of the The Duchess and the Dirtwater Fox, starring Goldie Hawn. The footage didn’t end up making the film, but the tradition was set. 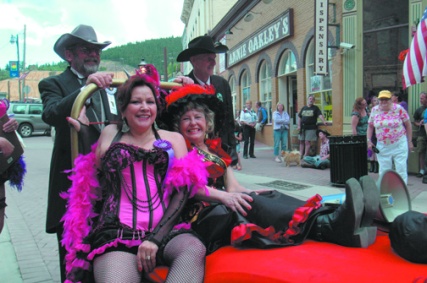 Although the topic is a bit racy, Lou Bunch Day is actually full of family fun and entertainment. Enjoy, live music, food and drink vendors during the day. The Madam’s and Miner’s Ball, where the Madam, Sporting House Girl and Dandy Dan of the Year are announced, takes place in the evening.

Bunch is well known in the area, not only as the last madam of Central City—she didn’t close her brothel until about 1914—but as a woman who cared about the local miners and her “Sporting House” girls. Bunch arrived in Central City around the late 1800s when the gold rush was in full swing. She ran the most successful brothel on Pine Street, the town’s “red light” district at the time. Today, only the foundations remain.

“There were three men to one woman, so of course being a madam was one of things to do, due to the fact you could make really good money,” Hines explained. “Prostitution was never legal, but it was tolerated. Of course, she befriended and supported a lot of groups including the Gilpin County Baseball team, and she did all kinds of cool stuff. She was very well known in town.”

It’s widely reported that when the tuberculosis epidemic swept through town, she closed the brothel and used its rooms for a makeshift hospital. “When the economy hit rock bottom because all the miners became sick, Bunch and her girls shut down the houses of ill-repute and brought the miners back to health,” Hines said. “That was one of the big things she did.” It’s also what makes her story endure.

Legend also says Bunch was caught in bed with the mayor, and his wife ran her out of town on a bed. It would have proven a feat as Bunch was reportedly a robust 300 pounds. Whether the story is true or not, the non-profit Central City Local Events and all-volunteer Sporting House Girls host one of the country’s most unique festivals featuring bed races based on the legend. 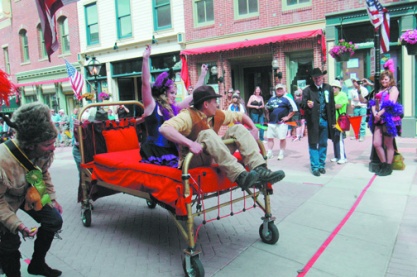 Festivities surrounding the The Famous Bed Race begin at noon with music, food vendors and entertainment including the Sporting House Girls. A parade leading the bed to the starting line and followed by the race teams begins about 2:45 p.m. and the races start at 3 p.m.

Enjoy the sounds of The Blast, a variety rock band covering four decades of hit music, on the Main Street Stage from noon-4 p.m. Playing top hit songs from an assortment of artists and bands like AC/DC, Stray Cats, ZZ Top, Metallica, Tom Petty, Neil Young, and much more.

Bed race teams must register and submit $300 to participate. Each team of three must include two men and one woman. Racers start the at the south end of Main Street. When the time starts, one male team member puts on a red dressing gown and pushes the two others to the middle of Main Street. Once the bed is pushed around a barrel, the team stops and the men trade the gown. The second man then returns the bed, with the other two team members on top, to the starting position. Costumes are highly encouraged.

The Wild Bunch, will also be performing street skits, giving folks a glimpse of what Central City was like during the Gold Rush. “We are a group of all volunteer cowboys and cowgirls that work hard to help attract visitors and entertain everyone,” Mike Keeler said. “Our shows include a lot of comedy and a lot of old fashion gunfights. [They] are entertaining and family friendly.”

The Wild Bunch shows begin for the summer season on Lou Bunch Day and run though Aug. 27 on Saturdays and during special local events. Each of the five shows between noon and 4 p.m. are different and unique.

The Madam’s and Miner’s Ball is free from 5 p.m. to 8 p.m. on Main Street and includes the naming of the Madam, Sporting House Girl and Dandy Dan of the Year. Dance to the tunes of Jewel and the Rough performing cover songs from the 70s, 80s, 90s. Get drinks from any casino bar and bring them outside to enjoy while dancing.

Originally published in the June 2016 issue of the MMAC Monthly