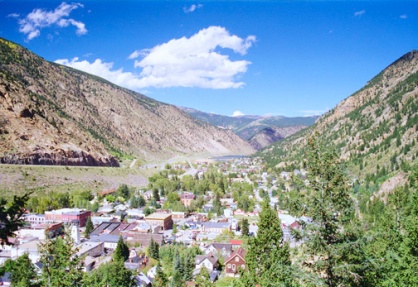 It is because of the designation by the National Park Service 50 years ago that the Rocky Mountain mining history has been so well preserved in Georgetown. More than 200 Victorian buildings continue to occupy the town’s architectural landscape, maintaining the defining characters of Georgetown in its 19th-century heyday.

According to Historic Georgetown’s Anne Marie Cannon, it was James Grafton Rogers, a former Assistant Secretary of State under President Herbert Hoover and chair of the Colorado Historical Society’s board of directors, who is mostly responsible for saving the town. Rogers had a home in Georgetown when the construction of Interstate 70 threatened Georgetown. In an effort to prevent the assured destruction of the town’s Victorian structures, he led a movement to designate the entire area, including nearby Silver Plume, a historic district. It worked. That movement became what is now Historic Georgetown.

In 1970, what is now Historic Georgetown, was incorporated. From the start, the organization was as much of a preservation agency as a traditional historical society. A first project was assistance to the Town of Georgetown in the passage of Colorado’s first town-wide historic preservation ordinance that provided for the design review that continues today.

Historic Georgetown’s Golden Jubilee House Tour features 15 fine homes and historic sites in Georgetown, July 30 from 9 a.m. to 5 p.m. Tours include a combination of 19th century buildings including beautifully restored homes, the newly restored 1874 Schoolhouse, Hamill House Museum, Hotel de Paris Museum and the Alpine Hose No. 2 Fire Fighter Museum. House tour tickets are $30 for adults, $25 for students and seniors and free for children under 12. Tickets include the book, A Guide to Historic Sites in Georgetown Colorado. Visit
historicgeorgetown.org for more details.

A picnic lunch will coincide with the Golden Jubilee House Tour on the lawn of the Hamill House Museum, July 30. Menu items include hamburgers, hot dogs, chips, fruit, dessert and a cash bar. Lunch tickets are $10 and proceeds benefit the restoration and repair of the Hamill House.

Established in 2003 to promote the preservation and interpretation of the cultural and natural assets of the Georgetown-Silver Plume National Historic Landmark District, The Georgetown Trust built and maintains the Georgetown Gateway Visitor Center, acquired and restored the Georgetown 1874 Schoolhouse and runs the town’s Cultural Arts Program.

The organization welcomes The Legendary Ladies to the Georgetown Heritage Center, 809 Taos St., June 30 at 7:30 p.m., to perform their “Unconventional Women of the West.” Meet Molly Brown, Calamity Jane and other courageous and fascinating women whose lives became a part of the lore of the West. Travel back in time with us to hear the stories of real women who made a significant impact on the West. Tickets are $15 per person. For tickets, visit http://www.georgetowntrust.org or call (303) 569-5136.

The Georgetown Loop Railroad, one of Colorado’s first visitor attractions, was completed in 1884 and considered an engineering marvel for its time. In 1973, the Colorado Historical Society began restoring the railroad as part of its 978-acre Georgetown Loop Historic Mining & Railroad Park. It continues to run the railroad which offers passenger rides and mine tours. Departures from the Georgetown Devils Gate and Silver Plume stations occur from 10 a.m.-3:40 p.m. daily A special Beer & Brat Train, July 30, departs Silver Plume at 6 p.m. Visit georgetownlooprr.com for details.

The National Society of Colonial Dames of America in Colorado preserve Georgetown’s history through their operation of the Hotel de Paris museum. The organization acquired the building in 1954. In 1970 the building was placed on the National Register of Historic Places and major restoration projects were undertaken from 1973-78. Tour the building, July 29-30 from 10 am. To 5 p.m., or July 31 from noon-5 p.m. Learn more at hotelde
parismuseum.org.