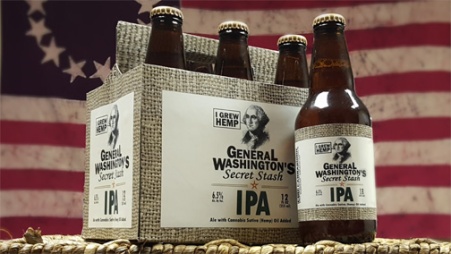 On June 13, 2016, Dude’s Brews received Federal formula approval from the TTB for its patent-pending process to create cannabis infused craft beer. The approval process took nearly one year as thorough analysis was required at a TTB sanctioned testing facility.

The brewery believes cannabis not only belongs in beer, but it is the responsible thing to do. Mason “Dude” Hembree explains, “We ask our supporters to research Patent #6630507 held by the US Government as Represented by the Department of Health and Human Services. This patent was our inspiration and expresses the true the depth of what we are doing.”

The brewery is not shy to take stand in favor of cannabis reform, which is an alcohol industry first. “We believe Cannabis should be removed from scheduling, just like alcohol and tobacco. We believe our beer will help bring the debate to the local bar, tavern and liquor store,” Hembree continues “What better way to introduce the softer side of the plant than through a beverage America already loves and accepts?

The brewery believes their beer will influence alcohol-industry disposition on cannabis –which currently stands in opposition through lobby efforts- while at the same time expose Federal level hypocrisy before improper legislation is written. Hembree adds, “Our Federal formula approval is unprecedented, but even with this and state level reform sweeping the nation, there is still a lot of work to do at the Federal level.”

General Washington’s Secret Stash is the new official name for the brewery’s line of cannabis infused beers (Previously Canna-Beer, Sativa, and Indica). The new brand identity was created as a nod to America’s historical acceptance of the Cannabis Sativa plant; it is named in honor of America’s most famous cannabis growing rebel leader.

Hembree explains, “Federal approval or not, this is rebellious, and we know the reform effort is far from over. So, who better to lead a band of rebels than General Washington? We’re going up against a daunting status quo” Coincidently, Washington was also well known to have grown Cannabis Sativa for its textile uses in early America; making the General all the more fitting to be its primary ambassador.

Understanding government disposition can change at any moment, the brewery is seeking likeminded revolutionaries to form a community of support. The brewery hopes their brews will bring awareness of Patent 6630507 and petitions to change legislation, including their own found on Change.org. Fellow revolutionaries are invited to also place their name -via expandable content labeling- on the General Washington’s packaging for life.

“We believe everyone deserves the opportunity to say they helped tip the scales in favor of American cannabis reform,” Hembree explains. The packaging will utilize expandable content labeling that can pull to reveal the list of Rebel Founders. “If this Trojan horse of an idea helps to change the opinions of the remaining laggards in the US, then our supporters deserve the lifetime notoriety we’re providing through our project.”