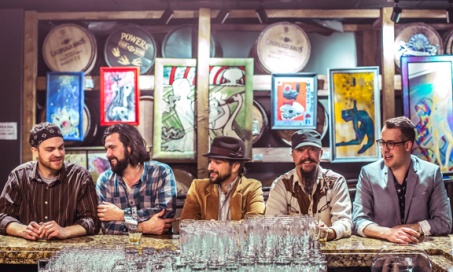 By Jeffrey V. Smith
NEDERLAND
The members of Colorado’s The Drunken Hearts have matured musically, and emotionally, during the last two years. What started as a trio of best friends playing acoustic tunes, has progressed into an electrified, five-piece powerhouse of alternative Americana music fueled by its members’ newfound commitment to their musical evolution.

The Drunken Hearts perform at The Caribou Room in Nederland, Nov. 19, with support from Lyons-based singer-songwriter and multi-instrumentalist Arthur Lee Land. Additional Colorado shows include the Ogden Theater in Denver, Dec. 2; Barkley Ballroom in Frisco, Dec. 30; Vail Ale House on New Year’s Eve; and at the WinterWonderGrass Festival in Steamboat Springs in February.

Although well on the way to realizing their musical potential after the band formation in 2010, the members of The Drunken Hearts were stunned when their founding drummer and longtime friend, Ted Welles, passed away in October 2014. Welles was well known for his kindness and generosity, in addition to his passion for music and life in general. The unexpected personal tragedy, however, transformed into a mission to grow the band, and advance its music. So far, so good.

“[Ted’s passing] kind of prompted us to take things a little more serious, and really get out there, and try to make a name for ourselves to take the band to the next level,” acoustic guitarist and founding member Andrew McConathy said. “So, we added electric guitar, electric bass, pedal steel, and all of these new elements over the last couple of years, that have really grown the sound. It’s a much bigger sound than it used to be, and we’re having a lot of fun these days.”

From the start, the band has been an outlet for McConathy and his original music. But, while the guitarist continues to front and shape the act’s sound, many other aspects of The Drunken Hearts have evolved. The band’s current line-up includes Arkansas native Cody Russell on peddle steel and banjo. “He moved out here a few years ago and took a liking to our music. Next thing you know, he’s in the band,” he said. Electric bassist Jon McCartan moved to Boulder from Vermont to be in the band, and Alex Johnson—known for his work with Jet Edison—is the band’s drummer.

“We have electric guitar as well, which has been Rob Eaton, Jr., until the last couple of months,” McConathy explained. “We’ve been working in some new guys, and we’ll see what happens there.” For the band’s current tour, Mike Peterson is joining in on electric guitar. “He’s a great, great friend of ours and an awesome, well educated guitar player. He’s doing a great job.”

Band members are “potentially” going to audition another guitarist when they return home from tour. “We have a big, big 2017 ahead of us,” McConathy said. “Things are going really well for us, so we’re antsy to get it figured out and hit the road in the next year. We’re very confident with where we are, and where we’re going.”

According to McConathy, he has always wanted to mix more electric instruments with his acoustic predispositions. “I’ve always kind of wanted to do the rock ‘n’ roll thing at heart,” he said. “I have a lot of outlaw country roots growing up in Louisiana and spending summers in Texas. It was just a natural progression to create more and more sound… and try to get people dancing.”

His roots may be in the south, but Colorado’s music scene has had a huge influence on McConathy and his music. “It’s kind of an amalgamation, to use a term that Billy Nershi once used,” he said. “There are so many different musical influences that all end up here. Some are created here in Colorado, and some are cherished here… like bluegrass. I grew up listening to, and following around, the String Cheese Incident, so I have some ties with those guys going back to my high school days growing up in Vail… It’s a competitive landscape, but I like to think its one of the best in the country and we’re just happy to be here.”

Even before he started the band, the musician was busy adding to the state’s summer festival scene by creating the YarmonyGrass Music Festival, which is set to celebrate its 12th year next summer. “I didn’t know where I was going when I started the festival, but ultimately it grew into my own music and creating my own band and my own songs,” McConathy said. “But, at the start, it was just a passion for bluegrass and community. I’m bringing some of my favorite people together for some epic parties on the Colorado River. I didn’t really know it would grew into what it is now. Obviously, it’s super fun for all the folks who go and the bands who get to play, certainly for The Drunken Hearts, who get to host it every year.” 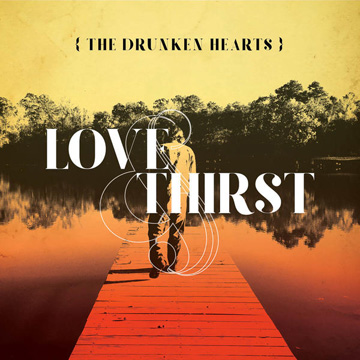 The band released its latest recording, “Love & Thirst,” earlier this year. So far, it’s the only album that features the band’s “new sound.” Rob Eaton, Sr. of Dark Star Orchestra produced the EP and sings background vocals on it. “Live For Today,” the band’s only other release came out in 2012 and features original band members. It features stand-up bass, acoustic piano, fiddle and “a more of an acoustic bluegrass vibe” with no electric guitar. Scott Law, McConathy’s guitar teacher, performs on a couple of tracks and Tim Carbone of Railroad Earth played fiddle and produced it. “It’s a cool thing to be able to look at the two albums and look back. Obviously, there are a lot of memories attached to the first one with the original guys, and then you can flash forward to where we are now. It’s been a wild ride.”

McConathy, who has performed at the Stage Stop with The Drunken Hearts a couple of times, is really looking forward to playing The Caribou Room where he recently attended an intimate, private String Cheese Incident show. “It’s great to have a state-of-the-art room like that, and in Nederland of all places,” he said. “We’re ecstatic to get up there. It’s going to be an amazing night.”

Originally published in the November 2016 issue of the MMAC Monthly