By Jennifer Pund
EMPIRE
Decades of retail management experience along with a passion for creativity and design gave Aaron and Steffanie Bornhoft the idea to one day open their own store. They were not in a hurry. A historic building in an amazing location, and a newfound desire to settle down with their children, changed things and turned their dream into an immediate reality. The couple is now breathing new life into an historic structure on Park Avenue in Empire with their Colorado Country General Store & Souvenirs.

The general store is stocked with anything anyone headed into the high-country could ever want or need. In fact, their offerings are modeled after what can be found at a full-service convenience store and Aaron’s retail connections allow them to keep prices very competitive.   “We went into a 7-Eleven and saw that you can get everything from stationary, games, medicines and snacks, and then we expanded on the sporting goods we knew sold well,” Aaron explained.

“We have a variety of necessities such as milk, eggs, bread, bacon, sandwich meat, cereal, boxed pastas, canned veggies, laundry soap, cleaning supplies, pet food, OTC pharmacy items, health and beauty items, auto, hardware and stationary items.The couple capitalized on their extensive retail experience, combining it with Steffanie’s talent and creativity to produce their unique shop in Empire. The couple had talked about running their own store, but were in no hurry to get started. The dream took a fast track, however, when they found the building that was the former home of East Park Avenue Antiques was available. “Quite honestly, we thought we were still a couple of years out, but with the location—being attached to the [Original] Hard Rock Café, across from the popular Jenny’s Restaurant and being on the busy Highway 40—we couldn’t pass up the chance to take on the challenge of opening our own store.”

Steffanie creates most of the souvenir items for the store, including the full-size, custom corn hole sets. “He has the ideas, and I make them,” she said. “I make all the pillows, bean bags and corn hole boards, along with the T-shirts, sweatshirts and of course the sticker design. Since we opened so fast, I even made the cash register counter from wood found at the store.”

The couple met working at a Walmart in Broomfield, but after years of moving around the country, including Hawaii, they knew they wanted to settle down and spend more time with their children. The idea for the store began with a line of stickers Steffanie created that merges the Colorado flag with outlines of other states. 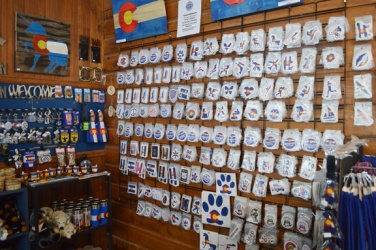 “She created all 50 states this way, and we were thinking of naming a sticker wall in the store the ‘Colorado Country.’ We loved the name for the whole store, and found it was available, so we started the incorporation process,” Aaron said.

“Our best seller both summer and winter so far has been the vinyl stickers. Steffanie creates hundreds of designs representing Colorado from activities, towns, and all 50 states. Our customers examine the wall of stickers the most out of anything in the store.”

According to Steffanie, she has been interested in design and art as long as she can remember. “I’ve been drawing since I was five. I just started tracing the lines and eventually went off on my own. I liked it a lot,” she explained. “My mom would hate it because I would draw on myself with Sharpie and make it look like tattoos. In high school, they would wonder if it was real or not.”

After more than seven years at Walmart, Steffanie left to focus on graphic design and offering her work on websites like zazzle.com and Redbubble.com. “I’ve worked with [the websites] for about seven years,” she said. “It’s not guaranteed work, but if people want to buy my designs, they can.”

Aaron and Steffanie are invested in their new home and hope to remain in the community for a long time. With two young children, the couple is finally ready to settle down. Since meeting, the two have relocated for work many times. Walmart jobs took them from Broomfield to Northglenn to Frisco to Vail in just their first four years together.

After their 2011 wedding in Winter Park, the couple moved to Kailua Kona, Hawaii. “We put what we had in our suitcases, and had an air mattress.” Steffanie said. “We spent a year there and loved it, but the opportunity for promotions was limited.” The two moved to Northern California before being transferred back to Colorado with stops in Littleton and Frisco.

“Our family moved to Leadville, but we found ourselves traveling frequently to Denver for the zoo, museums, parks for the kids and ended up finding a home to purchase in Empire to commute to Summit County and the Denver area,” Steffanie explained. “It’s been like the military. Every year we’ve moved. So, no more plans to move. It’s an amazing feeling for us. One way or another we are trying to be here at least 20 years. [The kids] will grow up with us here, and get some business ethics too. Just as long as we are together.”

Aaron currently splits his time between their Empire store and Walmart. “The time I was spending at Walmart, I can spend here, with my kids,” he said. “I still work at Walmart, but only four hours a day, two days a week as the Customer Service Manager on Saturdays and Sundays.”

Originally published in the January 2017 issue of the MMAC Monthly