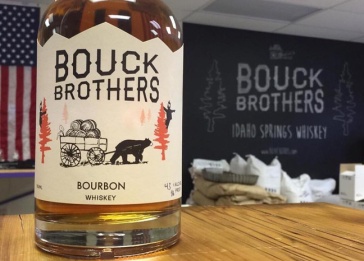 Stop in the Idaho Springs distillery, March 18, to get your hands on one of its first bottles of bourbon. A specialty cocktail and homemade bourbon balls will be provided with bottle purchase.

Owners Zach and Nick Bouck love blended whiskey, so in addition to filling their first bourbon barrels in 2016, they tasted bourbons from distilleries that would, when combined with their bourbon, make a delicious blend. They eneded up blending their Idaho Springs-made bourbon with another from Kentucky to create a unique small batch high rye bourbon with a caramel and rye flavor.

Return to the distillery, April 1, to be one of the first to enjoy its Colorado Coffee Whiskey release. Receive a doughnut and specialty cocktail with bottle purchase.

The distillery partnered with Corvus Coffee Roasters in Denver to make a one-of-a-kind, coffee-bean-infused whiskey. “We take whole beans from Corvus and steep them directly in our whiskey,” Nick said. The whiskey is unlike most coffee-flavored products, which are usually sweetened and low-proof like a liqueur. This is a full-strength whiskey with a subtle but, unmistakable coffee flavor.

Additional spirits created by Bouck Brothers are available in the tasting room, Saturdays from noon-7 p.m.