NEDERLAND
Known for his solo troubadour spirit—and knack for telling a good story—Todd Snider has been carving a musical niche for himself ever since releasing a debut album in 1994. It took joining a band three years ago, however, to push him in some new directions and teach him to be less “wordy.” Snider, who performed with Hard Working Americans at NedFest 2015, returns to town for a solo performance at The Caribou Room, March 17, with Rorey Carrol.

“It’s funny, the reason I got into that jam band was to try to learn to be more melodic and hopefully bring that back to whatever this is that I call the troubadour thing. Hopefully, I can get better at making up songs. People in my genre, are kind of wordy, and the people in the jam scene are more melodic. I like that.”

Snider’s solo shows, by contrast, are all about stories. Compared to working with the band, he says doing his solo act is like hard work. He points out that the lead singer of a jam band is in a unique position. “Think of the time you have on your hands. “ he said.

“[My show] is like, make up a song and sometimes tell people why you made it up, if that seems to be going with the flow of the night,” he said. “And, people sing a lot, some people dance, but you have to take a lot of acid to dance at a folk show. It’s been done, and I’m not discouraging anyone from doing it. Compared to the Dead, it’s almost like going to watch someone read. But there is music and singing there too.”

The musician says what he does is an old tradition, something he calls the “Rambling Jack Elliot-thing” or the “Woodie Guthrie-thing” where you just travel and sing and talk about it. “There’s not really a whole lot of guitar even involved,” he explained. “It’s Mark Twain-ish. I think it starts if you’re bumming shit, if you need a ride or a place to crash or anything like that. If you’ve got a song and a guitar, that’s going to up your chances of being invited or allowed to stay a while. And then, for me, it just became a way of life.”

The musician discovered he wasn’t alone in this idea and that performers like Jerry Jeff Walker, who wrote Mr. Bojangles, were actually quite similar. “I saw him when I was like 20. He was all by himself, doing exactly what I do,” he explained. “I thought ‘oh, fuck,’… it’s like you’re a free loader until you get the guitar, and then your a free spirit.” 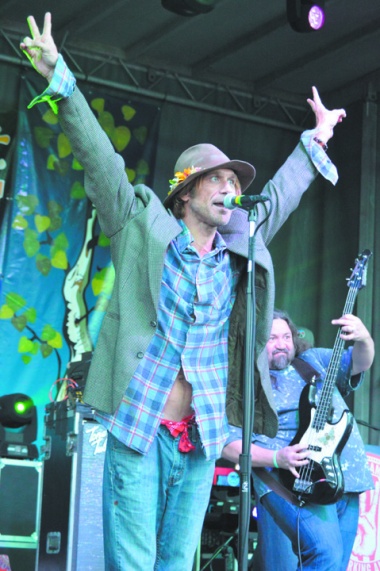 His shows are pretty loose, which makes them a lot of fun. “I have always been somebody who’s hung around bars and ran my mouth, since before I was 21,” Snider said. “It feels like someone slid a stage under me when I was about 20, and that part has always felt pretty natural. It’s always felt more like a rehearsal or I’ve been on this 25-year tour with this crowd practicing up for the real one that’s coming soon. When I’m alone, I can stop in the middle of a song. You can do what ever you want. So, it’s pretty unprofessional, but I’ve been doing it forever.”

Although he has yet to play a solo show in town, Snider has some pretty strong ties to Nederland. He began working with Hard Working Americans thanks to his friendship with Vince Herman of Leftover Salmon and Jeff Austin who was with Yonder Mountain String Band at the time. Both were Nederland-area residents.

“If you ask me to list the top five, I would put not just Boulder, but Nederland in particular on there… just going there and going to Vince’s house. Some of the loudest laughs I’ve heard in my life are from his house,” he said. Nederland is also home to Mark Watkins who first taught Snider to play the guitar when he was a kid. “I just feel I fell in with a good crowd of people up there.”

Snider has also worked with local band Great American Taxi—which includes the Hard Working Americans’ Chad Staehly—and arrives in town early to rehearse with them as the two acts are joining forces on tour this summer. He’ll also linger in the area after the performance to enjoy some time off and a little fishing.

The celebrated songwriter has explored a variety of writing methods over the years, but says his goal now is to get a song he feels is “finished,” in any way he can. “Because it’s so internal, no one can tell you different,” Snider explained. “Everyone can go, ‘it’s good, it’s done, it’s done,’ but in your mind you’re like, ‘it’s not done.’ And so, that feeling of having one done, I’ll take it any way I can get it.”

He says his style changes when the old ways stop working. “I was working the same way for a while, and then lately, I’ve been doing it more like the old way, but informed by having done it differently for a couple of years. The band also gave me a chance to do it differently because I didn’t feel like I was me. I feel like I got to express myself in very different way.”

As throughout his career, Snider uses each of his musical experiences as a building block toward the next one. “It was an experiment, and it kind of came out good. And it’s on the radio. But, I made it up as I was going along.” He explained that by doing the album, it “opened up” something so he was able to do what he did with Hard Working Americans. “I hope that will now inform whatever I do now.”

Originally published in the March 2017 issue of the MMAC Monthly