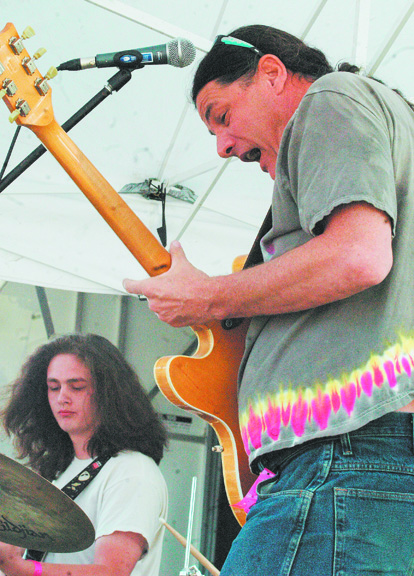 By Jeffrey V. Smith
NEDERLAND
Nederland’s Jon Ridnell is always up for a challenge, at least when it comes to playing music. No matter the genre, category or style, he’s ready and able to pull it off with a high standard of musicianship, and little bit of flair. His range of skills on the guitar and vocals—developed over decades in numerous bands and projects—will be on full display, May 27, at the Caribou Room when he brings together three wide-ranging acts that feature his versatile guitar work and desire to play, “whatever gets you moving.”

“It’s going to be a good one. I’ve done two of my bands at a lot of gigs, but I’ve never done three,” Ridnell said. “This doesn’t happen that often.” The special night, which is actually highlighting several local musicians, kicks off with an “acoustic bluegrass thing” from the Family Dog String Band—featuring Ridnell and his son, Miles—
followed by Louisiana-style tunes from Nederland-based Zydecoasters, which also includes Ridnell on guitar. 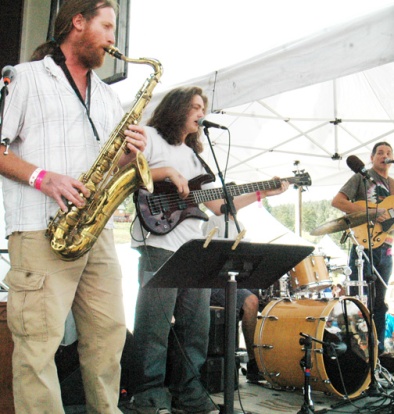 The evening’s headlining act is the latest incarnation of electric, funk-fusion and jazz group, New Family Dog, which was founded by Ridnell and also includes his son. The band is further turning up the heat on this one-off event by incorporating the talents of the Mile High Horns and famed slide-guitarist Sally Van Meter. “It’s going to be a cool show. We’re trying to step it up. I feel like it’s my last shot, and playing with my son, that’s not going to last forever,” the guitarist said.

Ridnell, who began fronting bands in hometown of Bronxville, NY at the age of 15, moved to the area soon after coming through on a tour with his band Black Dog in 1991. Since then, he has become a fixture on the local scene, playing 100s of his own shows annually and joining in as a special guest at countless more.

The guitarist is rooted in blues and rock, but is open to doing just about anything he finds interesting. In addition to his acoustic and electric acts and Zydecoasters, Ridnell can be found on-stage with The Ned Trio—a Brazilian jazz group that includes himself, Miles and Shawn Madeiros on drums—and the Dog Duo, when its just him and his son. He’s also a founding member of Power Lung Rangers, a “booty shaking,” hip-hop-influenced, funk and jazz band.

“The Caribou Room show is definitely kind of a culmination of a lot of these bands I have brewing,” Ridnell said.

The Family Dog String Band, which includes Ridnell on guitar and Miles on bass, will get the energy flowing with high-energy bluegrass and acoustic music. Ridnell didn’t know much about bluegrass before moving to Nederland and even defied its lure after several years of living there. In the early 2000s, he was hired by Yonder Mountain String Band’s banjo player Dave Johnston for his Swing Set side project. The group began as a trio, but expanded to involve other top, local musicians including Sally Van Meter.

Ridnell was forced to learn the genre once Johnston pulled him in. “All of sudden, I’m on stage with all these people, and I have no clue what is going on,” he explained. “I kinda had to learn it. Now, I really love it. The whole flatpicking style is a great American guitar style.” Now that Miles has grown into an accomplished acoustic musician, there’s no turning back. 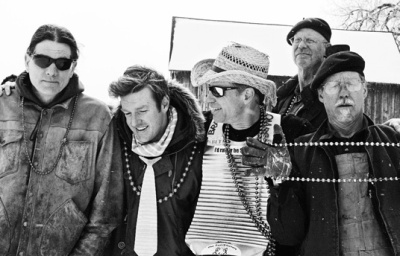 Zydecoasters, led by Gerry Cavagnaro on accordion, harmonica and vocals, performs a Zydeco and Cajun set following the string band. Cavagnaro, known simply as “Gerry C,” was an original member of Leftover Salmon and founder of local act Zukes of Zydeco.

The act also includes Ridnell on guitar, Matt Smart on drums and Mike Cutler on rubboard. “[Gerry C] is a super-talented guy. He plays harmonica, accordion and sings all these old, ancient zydeco tunes, Cajun tunes,” Ridenll said. “He knows a lot of songs. That’s been a really cool gig. I sing a couple of songs, but it’s basically his gig. It’s fun. I don’t really do cover bands, but that’s a fun one.”

The highlight of the evening is New Family Dog—including Ridnell, Miles, Steve Saviano on drums and Paul Stadler on saxophone—with the Mile High Horns and Sally Van Meter. While Ridnell has collaborated with the horn players for more than 20 years, and has recorded and performed numerous times with Van Meter, all of them have only performed on stage together once. “I’m pretty excited,” he said. Expect special guests as well.

According to the guitarist, New Family Dog plays a lot of different kinds of music. “The electric band does everything from Americana to blues to country music to weird avant-garde jazz,” Ridnell explained. At this show, the country songs will be performed by the string band.

Joining New Family Dog’s Stadler to form the Mile High Horns is trumpet player Eric Schneider, who plays with Boulder salsa band Quemando among others. “[He] is really a super-talented guy,” Ridnell said. “He writes all the charts for the salsa band, and he just won a national competition for Latin songwriting.”

Van Meter, on the other hand, “has a certain thing that is really Earthy,” according to Ridnell. “She doesn’t really play jazz, but she gets up there and plays funk-fusion with us, and hangs in there. It’s pretty cool to watch, and listen to,” he said. “She really makes me play a certain way, pulls me in the other way kind of a rootsy direction. It’s kind of a cool dichotomy going on there.”

Ridnell met Van Meter when she showed up while he was picking with Johnston and mandolin player Jeff Austin. “It was the first time I ever played with her,” he said. “Then, after that we did this Lyons recording and she was like, ‘let’s do some gigs.’” The two went on to record and perform together. “We’ve been playing ever since, so it’s been great.”

A show like this wouldn’t be possible locally without The Caribou Room. “It’s such a beautiful thing for Ned, the whole area,” Ridnell said. “It’s nice to have that quality of a room up here, and not have to go down below. That’s been great, let alone all the great acts that have been coming up here. It’s just awesome. They kinda stepped it up a little bit; quite a bit. Hats off to Pete and Sweetwave Audio crew”

Originally published in the May 2017 issue of hte MMAC Monthly