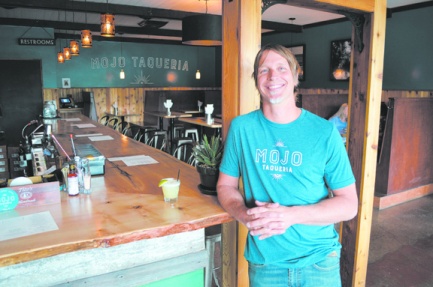 By Jennifer Pund
LYONS
After an unexplained, late-night fire in March, Mojo Taqueria, a “taco joint” in Lyons, was again serving its popular tacos and margaritas by May. Owner Ty Hammes was eager to get back to where he’d left off with the restaurant he’d opened just four months earlier: serving fresh, creative, affordable Mexican food drawing on the flavors of Oaxaca, Yucatan, Baja and other Mexican regions in a relaxed and friendly atmosphere.

“It was shocking to see at first,” Hammes said, “but then a couple of days later you’re like, ‘well I guess this is just what we have to do now.’ It is what it is. The first week, I came in there and, literally, I just didn’t want to look. All the work we had just done four few months ago; we spent so much time putting it together. People were in here that we didn’t know with hammers just ripping it all out.”

Mojo Taqueria is located at 216 E. Main St. in Lyons

Mojo Taqueria, 216 E. Main St., opened with a huge reception from the town’s residents in November. Winter slowed business for a few months, and then the weather was just beginning to turn nice when the fire hit. “It was the first weekend we’d opened the garage doors on a Saturday. Then, that Monday, the side of our building went up in flames,” Hammes said. The fire ripped all the way through the roof on the top side. We had to rip the entire front half of the building right down to the studs.” For the sake of his business and employees, he knew he needed to get back open quickly.

What was estimated to take anywhere from three to five months to complete, according to Hammes, ended up being finished in just seven weeks. “One positive thing is that we had just done this four months earlier,” he explained. “So, rather than having to hire people we didn’t know to do the work, I just brought back all the people that worked on it before. It gave us the opportunity to button up some of the electrical that had been in here, that had been patched [up]. We put in new AC units, and we have fans in there now.”

Hammes and his crew are now going further by adding a flagstone deck and another pergola outside the “really nice” French doors they found and installed. “There are definitely some improvements and benefits that came out of it,” he said. 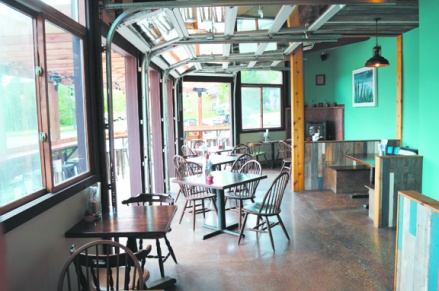 The town of Lyons, and its residents, offered the business plenty of support while it was closed. “Just wow. I didn’t expect that type of support,” Hammes said. “When the fire happened, the town of Lyons really rallied around us in a way I would not have predicted, including other restaurants that had fundraisers for us and our front-of-house staff. Everybody in town was so supportive. Lyons is a really great town, and it really showed its colors. “When Mojo Taqueria reopened in May, Hammes felt as if everybody in town came in. “All’s well that ends well. That’s how I feel about it,” he said.

It wasn’t just the support of the town that allowed Hammes to quickly recover from the fire. As the fourth generation bartender says, he has “restaurants in his blood.” His father owns, and still runs, Hammes Tavern in his hometown of Racine, Wis. that was first opened by his great-grandfather.

“I grew up in restaurants,” Hammes said. “My dad owns the bar my great grandfather built at the end of prohibition. My great grandpa ran it, then my grandpa ran it, and now my dad still runs it and both my brother and I started working there when we were 18.”

Hammes moved to Colorado in 1993, after a four-year stint living in Salvidor Brazil. “I wanted to live somewhere where music and culture was part of everyday life,” he said. “I ended up in the city of Salvidor, and that ended up being exactly what I was looking for. It’s the African part of Brazil and there’s a huge gathering of percussion and samba on the street every night.”

When he returned to the U.S. in 2001, he moved to Boulder and started the Brazilian style band Sambadende. “When I got here, I started a band because nobody was playing the street style music of Brazil. We play once a month at the St. Julien [Hotel in Boulder] and here and there occasionally. We don’t take it too seriously, and just have fun. I think that’s part of what kept me in the Boulder area. It was really fun creation and I wanted to keep doing that. It’s definitely been a big part of my life on the Front Range.”

Hammes uses his music connections to bring music to Mojo Taqueria. His own band even plays on occasional Sundays. “We usually have samba or salsa music every other Sunday, and we draw from connections I have,” he said. “When I decided to open this restaurant one of the agreements I made myself was that I wouldn’t stop playing music. It was too integral of a part of my life, and I didn’t want to give that up to do this. So, they have to cover me so I can go play music.”

When Hammes and his wife, Erika Anderson, moved to Lyons a year and a half ago, he knew he wanted to open a taqueria-style restaurant, but was having trouble finding the right place. “I was looking around different places on the Front Range, he said, “and this old building was sitting here and, really, I don’t think anybody wanted to touch it. It was in such bad shape.” It was the former Andrea’s Homestead Cafe that closed in 2011.

Thinking it would be nice to be close to home and where his kid goes to school while investing in his new hometown, he found a way to buy the building.

When he started the project, Hammes admits he didn’t have much of a plan. He called on his good friend Donni Mortimor to help develop the vision and, between the two—Hammes acting as general contractor and Mortimor overseeing the remodel—Mojo Taqueria took shape.

“I basically acted as the general contractor, as much as you can say for someone that had no idea what he was doing,” Hammes said. “I hired the people out, and relied on really talented friends I have to come in and do beautiful things like the bar and all this wood work. [Mortimor and I] just started with the floor and did one thing at a time. In the end I think it turned out really cool.”

The extensive remodel gave Hammes time to develop his menu that features his love of Mexican chilies like ancho, pasilla, chipotle, morita and more. “It gave me a year to work on the menu, the recipes and the cocktails,” he said. “I love Mexican chilies and building flavors off guajillo chilies, chile de arbol and different traditional Mexican flavors, and then creating fun combinations of tacos… along with the cocktails, tequila and mezcal.”

Mojo Taqueria found its chef, James Van Dyke, after the Culinary Institute of America graduate reached out to Hammes with the proclamation, “I’m your man.” Turns out the former Lyons Gateway Café owner and opening partner of Boulder’s Happy Noodle was right.

“He’s just a really knowledgeable and intelligent chef, and a guy that I get along with really well,” Hammes said. “He came in and was able to whip the kitchen into shape, and take the blueprint of what I had and really add to it.”

Mojo Taqueria makes everything from scratch and uses high-quality chilies, spices and other ingredients, including humanely raised meats and heirloom beans from Mexico. Specials include items like oysters on the half shell, lobster tacos and soft shell crab tacos.

“We do a lot of really creative things like duck carnitas tacos,” Hammes said. “That is where James is able to step up and add this other element and elevate some of the things, and add a really fun twist for people. It’s been a great relationship,” Hammes said.

“People love our short rib tacos and our Baja fish tacos are pretty incredible. We really lean on building flavors with traditional chilies, and then we do fun combinations. I feel like our food is really affordable and our drinks are excellent, and it’s a really fun environment.”

The tequila and mezcal drinks are also not to be missed. Happy Hour is daily from 3:30-5:30 p.m. and Margaritas are $5 all day Wednesdays. “The cocktails and margaritas are a really big portion of what we do,” Hammes said, “A lot of people come in for that. They know they can come in here and get tacos a la carte, or a plate, and a marg for a good price.” The full bar highlights tequila, mezcal, cachaca and eight beers on tap.

Visit mojotaqueria.com for a complete menu and list of weekly specials including Tuesday Family Nights where kids 9 and under eat free after 4 p.m.

Tuesdays
Family Night – Kids 9 and under eat free after 4pm

Friday & Saturdays
Oysters on the 1/2 shell

© Originally published in the June 2017 issue of the MMAC Monthly