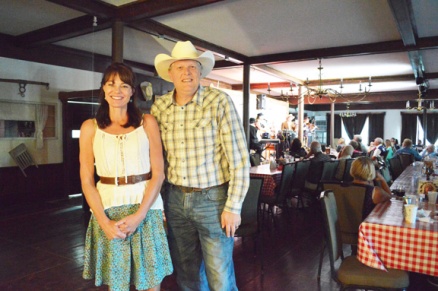 General Manager Michelle Oliver and Owner Quentin Wedan at the Lazy B Chuckwagon and Show in the historic Elkhorn Lodge. Photos by Jeffrey V. Smith

By Jeffrey V. Smith
ESTES PARK
The Lazy B Chuckwagon and Show, now in the second season of its modern era, delivers a “delightful mix” of family-friendly cowboy music, skits and humor, accompanied by an authentic, “gold-standard” cowboy dinner. But it’s more than that. Much more.

The production, which takes place in the historic Elkhorn Lodge, is committed to preserving Western heritage and rooted in an appreciation of the history and traditions of the Estes Valley, including the original Lazy B that opened in the early 1960s and ran for more than 40 years. It also features Barbara Barleen and musicians from her family’s band, which performed in Estes Park for almost two decades. All of this amounts to numerous memories, and the emotions that follow.

“I feel, honestly, we have this trifecta going,” General Manager Michelle Oliver said. “When people walk into that lodge, so many memories come back to them. We have people all the time that got married there or stayed there when they were kids. And then we have the Lazy B… so there are a lot of people who remember the original. Then, because I hired one of the Barleens and some of her musicians from Arizona—her dad was a musician and used to play at the original Lazy B— a lot of people will come in and say, ‘oh we love the Barleens.” There is all this good emotional feeling from these three directions of history. It’s really fun to be there. It’s incredible, It’s exciting.”

Oliver, who moved to Estes Park to live in the family vacation home following a divorce, was “looking for something to do” when she met Vic Anderson, a member of the Western Music Association and champion yodeler, at a Cowboy Poetry Gathering she attended with her 12-year-old son. Anderson reminisced about Estes Park, the Lazy B and chuckwagons in general. This nostalgia soon led to the idea to revive the show. “We were talking and I said ‘let’s go, let’s do it,’ and developed a business plan,” she said.

More than just having the idea, there is a great deal of passion motivating Oliver and her partner-owner Quentin Wedan, who worked at the original Lazy B for 10 years. “This is an idea who’s time has come, the Lazy B, and it belongs in Estes Park,” Oliver said. “All the right people continue to be attracted to this project. There is an energy behind it that draws the right people at the right time. That’s what I’ve been witnessing for two and a half years. The right people just keep showing up. The original owner called me the other day. People who used to perform there in the ’60s and ’70s, and people offer to help. It’s just the right thing in the right place at the right time.”

It’s not just about memories of what used to be, the Lazy B is also about creating new memories for families to cherish while developing the talents of young musicians. According to Oliver, the core of what they are trying to do is entertainment. “Last year someone said they felt coming to the Lazy B gave them all permission to just be free together. That was such a compliment. We have little kids and people in their ’90s. It’s just kind of like old-fashioned wholesome family entertainment. We do a lot of groups too. It comes down to the individual experiencing these memories that are unforgettable with, hopefully, good food and really good entertainment.”

Since the move to the Elkhorn Lodge, everything has really been working really well, according to Oliver. “People are clapping, they are stomping their feet, they are getting up and dancing and they are laughing; like belly laughing. It’s so fulfilling,” she said. “I think we are doing a good job, and we have these people who are really talented musicians. I mean they are award-winning. Micheal J has performed all over the country, and had his own Branson show. Vic is an author and a real cowboy. I just think we are raising the quality.” The band also includes pianist Jeff Olson, also from Branson, Missouri, where he built an impressive reputation as the musical director for Bobby Vinton and Ray Stevens.

A couple of the youngest performers, 18-year-old Celeste Johnson and 12-year-old Julian Oliver, recently performed in Idaho at the National Fiddle Championship. Johnson has placed first for three years, but placed fifth this year due to the distraction of performing at the Lazy B. “That’s still amazing,” Oliver said. Julian, who performs throughout the country and was Junior Junior Colorado Fiddle Champion for two years in a row, took home second. 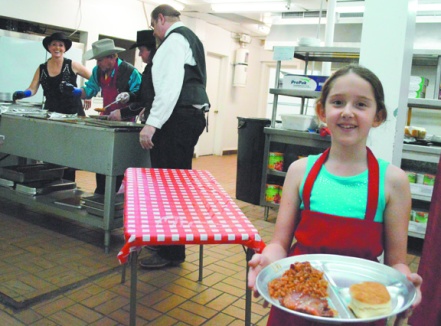 Performers at the Lazy B are not just good at what they do on stage, they also happily assist with dinner service and whatever else needs to be done. It takes a certain type of team player to work at a chuckwagon, and the Lazy B has many. “It’s an event every night and everybody pitches in and it’s significant to have the right type of person,” Oliver explained.

The general manager learned this with the help of Barbara Barleen, who introduced herself two weeks before the Lazy B closed last season and now plays in the band. “She just offered her services, not as a musician, but, as she said, ‘I have been doing this kind of thing for 28 years. I want to walk beside you, any way I can support you. This is your baby, I want to help you.’ It didn’t even occur to me to use them as musicians until I was auditioning other musicians. I called her and asked if there was anyway she would consider it.”

Oliver and her business partner went to see the Barleen family’s show in Arizona and realized the level of their talent. “I mean it’s not just the talent, it’s the willingness to make it happen no matter what it takes,” Oliver said. “So, all of those musicians are in the back. You don’t see them, but they are the ones serving the food. It’s more fun to have them out and be seen, it’s so much fun.”

Even Anderson, who is in his early ’70s, does double duty. “He goes out and tells cowboy stories and engages and teaches the kids how to lasso,” Oliver explained. “Every night he goes around and he’ll come at the end of dinner and tell me everyone that’s having a birthday, or having an anniversary. Last night he gave me a list of 12 people and their names and ages and what they are celebrating.”

According to Oliver, its all about having the right attitude and being willing to lend a hand when and where necessary. “All of these people have that attitude. We just attract them. Seriously,” she said. “They look around and see what needs to be done and they pitch in and nobody is too good to clean I toilet. We just all do what has to be done. It’s fun. We have fun working hard.” As she likes to say, “it’s more than just a low paying summer job.”

Lazy B employees and volunteers follow their own interpretation of the Code of the West, which they’ve boiled down to “think fast, talk slow, shoot straight.”

Raising the bar on the quality of both the chuckwagon and show was one of the main reasons for restarting the Lazy B. Oliver had noticed a distinct decline in quality when it comes to chuckwagons and Western music in general and wanted to change things. “One of the goals was to raise the bar. Better quality so that we are actually setting that gold standard and pulling in all the generations so they can be educated and inspired and get on board with this whole thing,” she said. “Somebody has to set the precedent on how to do things. So, it’s us. It’s a collective. It’s the right thing to do.”

The Lazy B Chuckwagon and Show is open through Sept. 30. Doors open at 5 p.m. and dinner is served at 5:30 p.m. Sunday matinee performances are offered throughout the season at 2 p.m. Tickets are $35.50-$39.50. Children ages 4-12 are $14 and under age 4 are free. Visit the website to learn more about meals—which feature slow cooked brisket and pulled pork, baked beans, baked potatoes, biscuits, desert, coffee and lemonade—and options for dietary restrictions. A cash bar is also offered.

Visit lazybranchandwranglers.com or call 970-235-9400 for information and reservations.

Originally published in the July 2017 issue of the MMAC Monthly
Photos by Jeffrey V. Smith