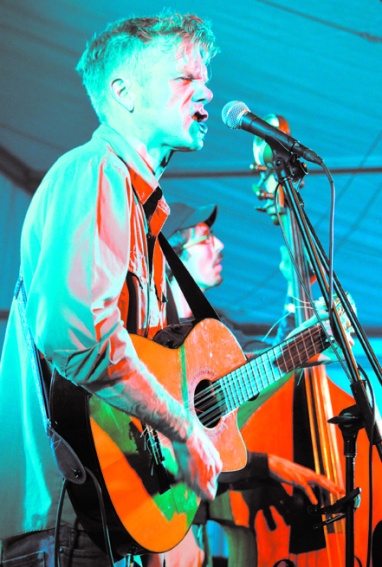 By Jeffrey V. Smith
NEDERLAND
Clay Rose is “like a chicken with its head cut off” advancing his, and his band’s future. Both are looking bright. The band leader of Boulder’s Gasoline Lollipops is not only working on logistics for a new album, a recently launched Kickstarter.com campaign to fund it and upcoming tour dates including Red Rocks, Belize and Europe, but he’s continuing to work on himself as he emerges from self-described “tough times.” Catch up with the band at a special NedFest “Late Night” show at the Caribou Room, Aug. 26 at 10:30 p.m. following The Motet’s headlining performance on the main stage. Entry is free with a festival wristband or $15 at the door.

About a year and half ago, Rose’s public battle with addiction took him to a dark enough place, he became determined to turn his life around, not only for his own future, but his son’s as well. He’s been sober and looking forward ever since. “I am certainly nowhere near where I was, but I feel, like at least for now, that shadow is not ever very far away. It’s attached and I just need to stay in front of it,” he said.

While Gasoline Lollipops has been steadily growing its fan base and developing its style over its eight years, the last year and half has been incredibly productive for the band—it released its first full-length album, headlined in Denver for the first time, began performing in larger venues and added to its line-up among other successes—and the future is shaping up to be even better.

Not unlike the band’s full-length debut, Resurrection, released in February, Rose’s new positive lifestyle and attitude will be heard on the band’s next album, Soul Mine. He said it’s not a concept album, but it certainly has a theme.

“We definitely have the songs mapped out, he said. “It’s about what it takes to rebuild an identity after you’ve burned the last one to ashes. You’ve got to go deep in yourself and find out what’s there that’s worth saving and what’s there to be discovered that you never did before. That’s where I am at in my life lately: getting sober and sifting through the wreckage of my past and looking toward my future, trying to figure out who I want to be from here on out.” A vinyl release party is already on the books for Dec. 16 at the Fox Theater in Boulder.

For the uninitiated, Gasoline Lollipops plays music that “combines the sincerity of dirt-floor folk with the rebelliousness of punk.” They are both high-energy and heartfelt, “like the American highway’s soundtrack.” There are elements of country, Americana, rock, punk and more. “The ‘dirt-floor folk’ thing in our bio, I like that a lot,” Rose said. “It’s roots. It’s very rootsy because I grew up on the road with my dad in a 18-wheeler and with my mom out in the sticks in Tennessee. So all the music I grew up listening to was roots of some kind; whether it was roots psychedelic rock or blues or folk or whatever.”

On paper the band easily fits the description of acts that call themselves alt-country, but one listen and it’s easy to hear how their energy sets them apart. Plus, Rose would prefer to think his band is something more. “I’m not a fan of alt-country. The name itself is OK, but there’s too many bands associated with that title that I don’t care for, so I’d rather not be in the boat with them.”

The aspect of Gasoline Lollipops that helps them shed common description is its “angst,” according to Rose. “It’s rougher, it’s more punk rock and more gravel,” he explained. “That’s the thing about alt-country these days; all it is an alternative to is main stream country, which isn’t country at all. Basically, it’s old-school, main-stream country… that’s what’s called alt-country today, but it’s still just polished radio county.”

The band’s style and line-up has continued to progress over the years leading to a more refined, defined and original sound. “One of the main things is we hired Donny Ambory. He definitely brought the “Nashville twang” into our sound, or accentuated the “Nashville twang” already there. But then bringing Adam Perry into the band on drums; he definitely has much more punk sensibilities than anybody else in the band. He’s brought an edge to it and given it sort of a garage sheen, if you will. And, I’ve been playing with Jeb [Bows on fiddle] forever. We molded our sound with the original drummer, Jonny Mouser.”

Rose said the difference between his band and others called alt-country became clear when planning their upcoming tour in the Netherlands. When a Dutch promoter who arranged a tour for Denver’s Casey James Prestwood & the Burning Angels discovered Gasoline Lollipops, he offered to book a similar tour. “[Prestwood] got to play in some maximum security prisons, and that’s what sold us on it,” Rose explained. “The concert promoter… started booking the tour, but when he sent our music to the prisons, they said ‘hell no.’ That’s what makes us different from the average country band, average country bands are allowed to play maximum security prisons, and we are not.”

Fully understanding Gasoline Lollipops without seeing them live is not possible. The shows are full of energy and can whip fans—and band members—into a frenzy. “I am personally trying to lose myself for a show,” Rose explained. “I think it’s definitely the same reason I go to shows… the same reason why most people go to shows; they want to lose themselves for a little while. And, it’s really great if you can lose yourself to a collective self bigger than you through connection. It’s one thing to lose yourself in a haze. It’s fairly easy to do. Lose yourself to unconsciousness. But to lose yourself to a higher consciousness, that’s the goal in when I’m playing live shows.”

Rose is excited about performing late night at NedFest. “The Caribou Room is great and they’ve got killer sound,” he said. “Plus, the Nederland folks, although they look like hippies, they dance like punk rockers. Pretty much every time we play in Nederland we get a mosh pit started, so I m really looking forward to that.”

© Originally published in the August 2017 issue of the MMAC Monthly