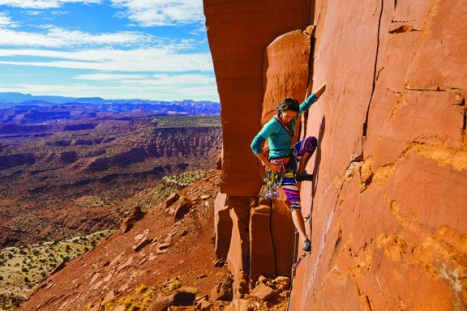 ESTES PARK
Handstands for Quinn, an evening of films, food, drinks and prizes, directly benefits Estes Park resident Quinn Brett, 37, to help in her recovery from a recent fall that left her paralyzed from the waist down. The event, Jan. 13 from 5-10:30 p.m., is designed to be an “incredible night of fun and entertainment.” Admission includes a TED Talk by climber Tommy Caldwell, a party with food and drink, the world’s premiere climbing film festival, a silent auction and “epic” raffle with tens of thousands of dollars of prizes. Free beer is included thanks to numerous donated kegs from breweries across Colorado.

Brett was introduced by chance to rock climbing at a young age and completely embraced the physical and mental aspects of the sport. For 20 years she traveled the planet, exploring summits and valleys, and climbing, hiking, practicing yoga, and laughing throughout the beautiful nooks of the world. She is a certified Wilderness EMT and holds a Master’s Degree in Educational Psychology as well as a Colorado teaching certificate. According to event organizers, “she snorts when she laughs and loves doing handstands on outrageous mountain summits worldwide.”

After more than a decade in the mountain town, Brett has become an integral part of the Estes Park and climbing community. She works as a climbing ranger each summer, rescuing injured hikers and climbers from the backcountry in Rocky Mountain National Park. She’s also been inspiring outdoor enthusiasts for more than a decade with mind-boggling ascents around the world.

The accomplished big-wall climber was injured, Oct. 11, when she took a 100-foot-fall halfway up Yosemite’s El Capitan and landed on a ledge while attempting a speed ascent of The Nose. She broke four ribs, shattered her scapula and suffered a fracture of her T12 vertebrae. As a result, she’s paralyzed from the waist down.
The Handstands for Quinn fundraiser is meant for everyone, not just climbers. It is a 100 percent volunteer effort and each cent raised goes straight to Brett—for rescue costs, retrofitting her car and house, and other expenses—as she recovers from this life-changing accident.

Put together by Brett’s Estes Park friends at the Estes Park American Legion Post 119, 850 N. St. Vrain Ave. in Estes Park, the event is being produced with the help and support of the REEL ROCK film crew, The Access Fund and many other industry and community supporters. The benefit will also serve as Estes Park’s premiere of the REEL ROCK film festival, now in it’s 12th season. Four films about “inspiring athletes pushing their limits” will be screened.

Donate directly to Brett at http://www.youcaring.com/quinnbrett-980578 or e-mail her brother at Cory4Quinn@gmail.com for other ways to give. Visit handstandsforquinn.com to learn more, purchase a ticket or make a donation. There is also an online auction featuring a wide-range of name-brand outdoor gear, art and other items running through Jan. 13.

Originally published in the January 2018 issue of the MMAC Monthly