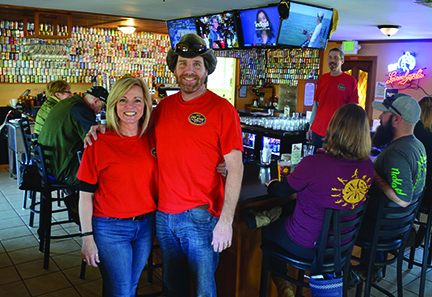 By Jeffrey V. Smith
COAL CREEK CANYON
Annette and Tom Lambeth walked away from their careers on the East Coast to “semi-retire” in Colorado and reinvent their lives. Now they’re working harder than ever to make Last Stand Tavern, their recently-opened business in Coal Creek Canyon, the perfect place for neighborhood residents to gather for “good food, good beer, and good conversation.”

The tavern, located in the former Westfalen Hof restaurant, is a sports bar serving traditional American food—including traditional Philly cheese steaks, hand-made burgers and other house-made selections—along with a large variety of beer. Thirteen large-screen TVs ensure a view of multiple sports, including local teams, major events, pay-per-view happenings and just about anything else, from most any seat in the house. There’s a separate, yet open, bar room and a large dining area featuring a wall of windows framing spectacular mountain scenery. A large, sunny deck is steps away from both and shares the same unobstructed views as the dining area.

“Our tag line is actually, ‘It’s not just a sports tavern, it’s a destination,” Annette said. “For people in the canyon, this is kind of their family room and a place they can meet their neighbors. Several neighbors have met each other that have never had the opportunity to do so. But for people that are coming from Arvada or Westminster or Golden, it’s a destination. You’re not just going to stumble across us. You are going to have to really come into the canyon and make this a place you want to go.” 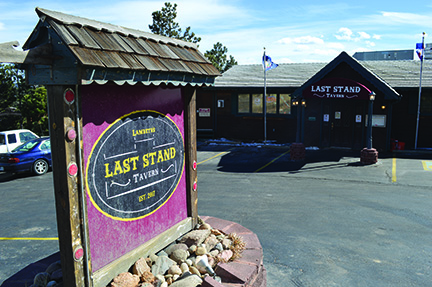 According to the Lambeths, Last Stand Tavern was born in the basement of their Philadelphia home many years ago. As an “avid home brewer,” Tom was known to always have a selection of beer on tap for his family, friends and neighbors. As the venue for their annual holiday parties, Last Stand Tavern became “the place to be for great beer, good food, drinks and plenty of holiday cheer.” The concept and spirit of the original—including Tom’s enormous beer can collection—has now been reinvented in Coal Creek Canyon.

The Lambeths move to Colorado was not surprising for those who know them. The couple fell in love with the state and the West decades ago during family ski and snowboarding trips, which they took multiple times a year. Their son, Troy, and daughter, Micaela, were equally captivated by this part of the country, and decided to go to college in Leadville and Bozeman respectively. Micaela ultimately transferred to a school in Gunnison.

“We both came to the conclusion that we always wanted to come out and see them, but we just didn’t see them enough, so we decided to kind of semi-retire. We gave up our careers back East about four years ago and then moved out here to be closer to the kids,” Tom explained. “We don’t consider ourselves locals, but I guess we are because we’re not just here for seven days and then going home.” 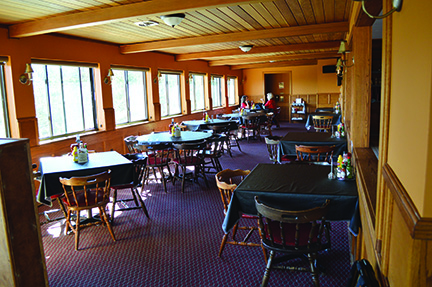 Although they love the state, the Lambeths have had to adjust to living here. “It took us a while to get used to it.,” Tom said. “Colorado is very laid back and we’re east coast mentality. We’re go, go, go, go, but we’ve slowed down a little, except for now. Now the after-burners have kicked in. We love it here.”

While living in Colorado was a long-time coming, starting a business in Coal Creek Canyon was not. “Why did we choose this canyon? We didn’t. This place chose us,” Tom said. “We were looking for a bar/restaurant and went all the way to Fairplay… we were willing to sell the house and move into a place that might have had on-site lodging. We looked at campsites, we looked at restaurants, bars and we were kind of striking out. Then all of a sudden [Annette] came across some obscure ad.”

The two came up to look at the former German restaurant from the outside, and “just fell in love” with the views and all the open space inside. “Me being a builder and developer, I just saw a potential for more seats, more of a meeting area, which is what we wanted—a place to have good food, good beers and good conversation,” Tom said.

The Lambeths put in a bid and they took it right away. “It was like that. We had to jump on it quick because, to us, we felt if someone else came up to look at it they would snag it in a heartbeat,” Tom said. “We acted very quickly and recklessly. That’s really the best way to put it.” The two quickly retired and began making renovations on the building themselves. It was up and running within three months and open less than two months later, just in time for the Super Bowl, after Boulder County permitting slowed down the process.

“We’ve never done this in life, so the learning curve is pretty steep, but we did hire a restaurant consultant that has been invaluable to us,” Annette said. “He worked with us right after we [purchased the building], and just has been a godsend to us.”

Things fell into place with the location, renovations and the advice they received. The same can be said about their staff. “We’re really fortunate to have the group of guys and women that we have today. They all mesh together really well. Their personalities are really great,” Tom said. “We thought we’d be going through people until we found a nice core group. Most of them are from the canyon, some of them are from farther into Boulder, but they all know each other. Unbeknownst to them we hired them… it’s like a reunion of sorts.”

Kitchen Manager Bryce Vogel is the son of a long-time friend who relocated from Iowa where he had the same position at a 355-seat restaurant. He also brought along a trusted line chef and friend to help. “[Bryce] completely puts his arms around his responsibility in the kitchen and we couldn’t be happier,” Tom said.

Last Stand Tavern doesn’t use frozen or processed foods and items like its three-cheese macaroni and cheese are made in-house. “Everything is as fresh as it can be. We try to do as much as we can by hand, because we know that flavor can’t be matched when you get it in a bag or a can,” Tom said. “If that was the case, everybody could do it at home. We want to provide something you can’t do at home.”

According to the Lambeths, they are excited the response so far has been “overwhelmingly” positive. “We appreciate that positive feedback… we’re not going to be perfect, ever, but we want to improve, and we want to learn. Positive feedback with intent to help us improve is great,” Annette said.

“We wanted an American Tavern/Pub comfort food place where you can go and just hang out. We want to keep it simple with comfort-type food,” Tom said. “The quickest way to describe it… is good beer, good food, good conversation. That’s it. I think we’ve met all three of those criteria.”

© Originally published in the May 2018 issue of the MMAC Monthly