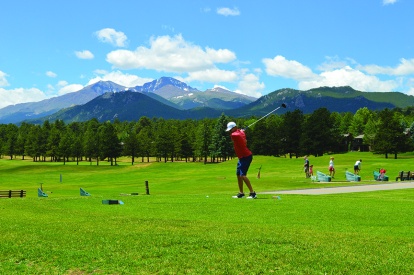 By Jeffrey V. Smith
ESTES PARK
This year, Estes Park is celebrating 100 years of mountain golf at the edge of Rocky Mountain National Park, and so should you. While the sport was introduced to the area by Windham Thomas Wyndham-Quinn, the Fourth Earl of Dunraven in the 1870s, it wasn’t until he sold off his 6,000 acres of property to The Estes Park Investment Company that a proper 18-hole golf course began to take shape.

The investors who purchased Lord Dunraven’s property started down the road of creating a course by building a clubhouse, which was completed in 1909. Smokin’ Dave’s BBQ at the Hangar and the pro-shop are located there today. Eventually, the Estes Park Golf and Country Club was incorporated on Nov. 10, 1917 with some of Estes Park’s most notable men of the time on its Board of Directors.

The first design was an 18-hole course set against Fish Creek, which opened for the first round of play on July 4, 1918. During the 1930’s financial crisis, however, it was converted to a 9-hole course and an airstrip was built in hopes of improving tourism. The unsafe airport, which did little to promote travel, closed in the late 1940s.
Further financial trouble forced the country club to lease its course to the Town of Estes Park. By the mid-1950s, the town was in full ownership and in 1957, it was leased to the recreation district, known today as Estes Valley Recreation and Park District.

Funding was obtained to transform the course—with its buffalo grass fairways, sand greens and prairie for rough—back into an 18-hole course with grass fairways, a watering system and locker rooms with showers. Henry Hughes, a golf course architect from Denver, was hired to transform the former Estes Park Golf and Country Club. His remodeled course opened on July 5, 1960 as the Estes Park Municipal Golf Course, now called the Estes Park 18-Hole Golf Course. 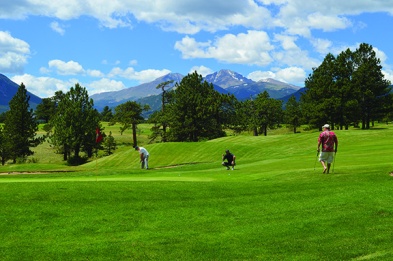 Several upgrades have been made over the years, including the addition of an irrigation system in the 1970s and a new fleet of gas-powered golf carts for the 2017 golf season. The management of the course is overseen by Estes Valley Recreation and Park District, but the property continues to be owned by the Town of Estes Park.

“This is a special occasion for our course here in Estes Park, which is one of the oldest in Colorado,” Manager of Golf Services Mark Miller said. “Only a handful of courses have reached this milestone in the U.S. and we are excited to be one of the few in that collection.”

Since the season opening, EVRPD has been celebrating the anniversary and will continue to do so throughout the year. A beer—Centennial Smash—was brewed by the local Lumpy Ridge Brewin Company to commemorate the 100th season. It is available all season long at the course clubhouse. Smokin’ Dave’s BBQ at the Hangar Restaurant is offering special food and beverage prices.

Lumpy Ridge Brewing created a beer to celebrate the anniversary.

To further commemorate the centennial season, the recreation district holds the Centennial Golf Tournament, July 4, starting at 8 a.m. It marks exactly 100 years since a group of men played the first round of golf on the course. The tournament is limited to the first 100 players who register by calling the Estes Park 18-Hole Golf Course at 970-586-8146.

Anniversary aside, the course, which remains open until Oct. 31, is a great place for residents and visitors to play a round in the mountains where it’s cooler and the scenery is unmatched. While its not the most difficult in the state, it does provide a good challenge to experienced golfers while allowing the casual golfer something to work with.

“The Estes Park [18-Hole] Golf Course is the place to come for not just golf. I think it’s a destination,”Assistant Golf Professional Austin Logan said. “Not only can you golf, but you can hike, you can fish, you can do everything, and the golf is a lot better than you would expect.”

According to Logan, who has been working at the par-71 course for 12 years, it’s one of the best courses around for its level of challenge. “Good golfers will like it here. On a lot of courses you just get beat up for one bad mistake and all of a sudden your round is gone. Here you can make a couple of mistakes,” he explained. “So, it’s a good challenge for the good player and it’s an awesome place for the beginner, too—which a lot of people who are going to visit the park, are. [The course] is not going to beat you up if you don’t golf all the time, and it’s just a good spot for a golf course, condition wise, compared to other golf courses. You think, ‘if it’s in the mountains, maybe it’s not as good.’ But it’s in awesome shape.”

Credit for the course’s excellent condition goes to course Superintendant John Feeney and his staff. “They work really hard, summer and winter, to keep this place maintained,” Logan explained. “As far as mountain courses go, if you look over on the other side of the Divide to Vail, Grand Lake, Summit, some of those, they had a really rough winter and lost some greens. You never want to lose greens, that’s a horrible thing. We uncovered our greens here in March, and they were awesome. They are awesome now.”

Beyond the golf, Logan points out the course is also a great place to view wildlife. Bears, deer, elk, fox, bald eagles, hawks, falcons are often seen on the course. “Anything you would see in the mountains, comes here at some point,” he said.

“It’s just a really great place to be. It’s really never packed. We have some events, but you can come out and find an afternoon time almost every day,” Logan said. “If you didn’t know there was a golf course here, come and check us out. There is something for everybody and don’t think it’s as crazy as you read. People hear 5 million park visitors and don’t even want to try it, but it’s really not that bad. If you’re a beginner, or a great golfer, there is something for everybody.” The course also features a putting green, chipping green, natural grass and artificial hitting areas for practice and learning.

To reserve a tee-time or for more information about the centennial season or leagues, contact Miller at 970-586-8146, e-mail 18hole@golfestes.com or visit evrpd.com/golfcentennial.

© Originally published in the July 2018 issue of the MMAC Monthly