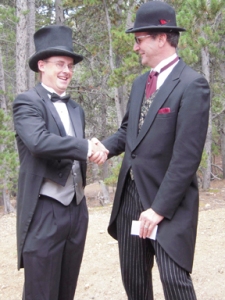 By Jennifer Pund
CENTRAL CITY
After attending a popular cemetery tour in the early 1980s, Linda Jones was certain Gilpin County could do a better job. Brainstorming about what would become the annual Cemetery Crawl, Jones thought it’s only natural for a place with more cemeteries than any other early mining area, to celebrate them. For 26 years, Central City goes a step beyond with reenactments by dedicated volunteers to “flesh out” the stories of past residents.

For the 2014 tour, Aug. 23, the tales of the interesting souls buried in the Knights of Pythias Cemetery above Central City will be explored.

In 1859, Central City grew to a population of more than 10,000 in a short few months after John Gregory discovered “The Gregory Lode” in a gulch near Central City. Due to the early discovery, area churches and lodges built several graveyards for members, leaving Gilpin County with an unusually large number of them.

“By the time other communities were established [in Colorado], they usually only built two cemeteries, a Catholic and a City. Gilpin County has 13. This allows us to move the Crawl every year to portray different pioneers buried there,” the founder and event chair explained.

Jones, who served as president of the Gilpin Historical Society for 20 years, feels these cemeteries are a “lovely reminder of an earlier, tougher time,” and finds the cemeteries this time of year to be heavily forested, lovely, quiet and tranquil.

“Every time I visit one of Gilpin’s cemeteries, there are people there, strolling, and reading the tombstones,” she said. “This year, we are portraying one family and one individual whose tombstones were robbed years ago and then returned.”

Every year, the tour features living Gilpinites who spend their real lives as teachers, brewers, accountants, telephone company workers and more, but spend a day in August portraying anything from a wife-beating, drunk miner to a pair of young miners that were buried in the same grave, Civil War veterans and a number of families with unusual tales or occupations.
Tours begin at 11 a.m. at the Knights of Pythias cemetery directly up Eureka Street above Central City. Tickets are $10 in advance or $12 at the event. Call 303-582-5283 to purchase tickets.

Celebrating their 150th anniversary, current Knights of Pythias members will introduce the cemetery at the Crawl and provide transportation to and from the Teller House parking lot.