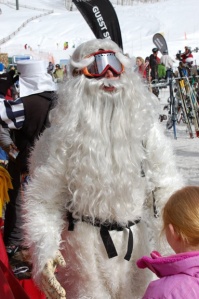 By Jeffrey V. Smith
FRONT RANGE
New Belgium Brewing’s infamous Mountain Adventure series—formally known as the Scavenge Series—is back. It’s a downhill scavenger hunt “like no other” and in 2015 it travels to six resorts in four states, with each stop benefiting a local nonprofit. The 2015 series stops at three Colorado ski resorts: Arapahoe Basin on March 7, Loveland on March 28 and Winter Park on April 4.

“New Belgium’s Mountain Adventure series raises money for some great causes, while providing the most fun you can possibly have on the slopes,” said Shawn Hines, New Belgium’s Pharoah of Phlow. “This is a day where you get to don your best costume, chase chickens, search for Bigfoot, solve ridiculous riddles and bond with old and new friends.”
According to Hines, who calls the event marketing with a soul, the brewery brings in a local non-profit to help with registration and some of the execution on the mountain and they benefit from all of the money received. The event costs $10 a person on top of a lift ticket, which goes to the non-profit. “We try to work with watershed groups or adaptive programs when possible,” Hines said.

The funds raised from the Arapahoe Basin stop will go to High Country Conservation Center, an organization that promotes practical solutions for waste reduction and resource conservation in the Colorado mountain community. Funds from Winter Park will go to Paradox Sports, which provides specialized adaptive equipment so that those with physical handicaps can actively participate in all sports; and the Loveland Mountain Adventure will benefit Alliance for Sustainable Colorado, which works to transforms sustainability from vision to reality.

The Pharoah explained the brewery has several large events that are “summer-heavy” and they wanted to bring something unique to mountain towns in winter. “We decided getting everybody dressed up on skis and skiing the mountain in search of clues, would be really cool,” he said. “It’s very engaging for five to seven hours each day. The whole thing was really born of a void of great events going on during the winter time.”

Registration runs from 9-10 a.m. with a shotgun start at 10 a.m. “Basically, teams of one to four will head out on the mountain with a clue sheet,” Hines explained. “There are 20 different clues—some of them are word-finds and riddles, some of them are anagrams telling you where to go on a run to find a clue to bring back and then five of them are actually moving clues in costume, you have to figure out what it is and then you have to catch them on the mountain. Then, whatever trivia or task they require you to do, is what you have to do to get that proof of clue to bring back down.” During the five-plus-hour event, teams try to get as many points as possible. “There is a competitive edge to it just because people like to compete, Hines said, “but we like to make sure its family-friendly so there are no points for coming in first.”

Costumes get extra points, so don’t forget to add  some flare to your winter gear. “People love to dress up when they are on skis, Hines said. We’ve had the Blues Brothers and Tania Harding and Nancy Karrigan. That was a hit, quite literally.” Team Butthead, Thing 1 and Thing 2, the Teletubbies and lots of guys dressed like women is standard. “We’ve seen everything from chicken suits to Elvis. The sky’s the limit. Anything anybody can wear to ski in they’ll wear,” he said.

While the event is basically the same at each location, they do have some overlap from dedicated people. “We change up one or two clues here and there, but the anagrams are different, so they still have to figure out questions to find out where they are. For a lot of people they want to go because it’s a helluva good way to spend a day and ski the mountain like you probably wouldn’t otherwise.”

Anyone who has participated in the past will see the event has received an upgrade. “We’re actually able to put more into it this year,” Hines said. “The experience will be very similar to what people have seen, but in a bigger way. Everything will have a little more of a ‘pro’ look because we’re able to put more manpower and resources into it.”

This will be the second year for the event at A-Basin and its first time at Winter Park while Loveland has hosted several times. “Loveland is kind of the granddaddy,” Hines said. “We usually see 300-400 people show up to compete for that one. It’s definitely one of the longest standing, and the weather is usually really good for that one because it’s the very end of March.”

The post-hunt celebration is where everyone gathers for the awards ceremony to enjoy New Belgium’s latest offerings and to try and win Rocky Mountain Underground Skis and other great prizes.