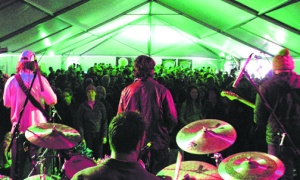 By Jeffrey V. Smith
NEDERLAND
One of the highlights of the annual Frozen Dead Guy Days celebration in Nederland, is a three-day showcase of some of the more noteworthy bands from the region. Many months of planning and booking, and a lot of dedication to the cause, is put into the process by local musician Bruce Lish who almost single-handedly brings the music portion of the event to fruition.

Featuring more than 20 bands, and one acoustic ‘tweener act, on two stages, the music showcase highlights as many of the regions most talented musicians as possible in a variety of acts performing a wide range of styles. It’s rare that someone can’t find something to groove to during the event.

“We are pretty eclectic, to say the least,” Lish said. “Our primary goals generally include a strong Nederland-area musician presence, a selection of talented, entertaining groups from around the Front Range, and maybe a couple of acts from outside the state.  We try to have no preconceived notions of exactly what genres of music we want to feature. There are no iron-clad rules.” While the styles may vary, Lish finds bands that are energetic, entertaining and talented go over well, which “leaves the playing field wide open.”

According to Lish, he usually begins working closely with Frozen Dead Guy Days Director Amanda Macdonald on the music showcase lineup around late October. “Then, I stay pretty busy in my spare time right up to the fest, finalizing details for the public, the media, the musicians, and production staff,” he said.

The saxophone player’s involvement in helping to organize the festival’s music came about as a result of his playing—mostly for free, at first—at the festival several years in a row. Around 2010, Blue Owl Books owner Kimba Stephane, who was then president of the Nederland Chamber of Commerce, began increasing the amount of live music at the festival.  “Around three weeks before the festival that year, I realized there were three different versions of the music schedule in print and online, and offered to help Kim make sure the musicians and the sound crew were on the same page in the big tent in the park,” Lish said. “I believe Kort McCumber was holding down First Street music almost single-handedly at the time.” He continued to work with MacDonald, the new director, in the coming years, taking on a few more aspects of coordinating the music and stayed on as “semi-volunteer music coordinator.”

“I appreciate the opportunity to continue contributing to the local music scene on a variety of levels, and hope to continue doing that on some level for many years,” Lish said, “and I would very much like to thank my valued musician friends for their support.”

Frozen Dead Guy Days music takes place, March 14-15, in both the ReAnimate Yourself and Brain Freeze tents located in Chipeta Park and on First Street. A $5 suggested donation for daily tent entry is requested from anyone over 12.

Apart from the official festival line-up, there is also music in numerous venues in Nederland and Rollinsville after 10 p.m., March 13-14. Malai Llama, Evergreen Grass Band, The CBDs, members of Mountain Standard Time, Magic Beans, The Symbols, Shakedown Street, Galaxy Agent, ONDA and more all have late-night shows scheduled during the event.