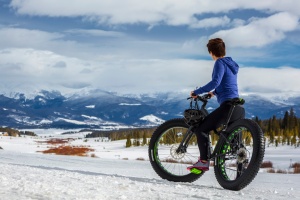 By Jeffrey V. Smith
FRONT RANGE
Go fat this spring and explore another way to get outdoors and enjoy the snow. Named for their ultra-wide tires, fat bikes have taken cycling year-round and is the latest way to play with two wheels in the vast Colorado outdoors. Fat bikes are fast becoming common on multi-use trails in the National Forests throughout the Front Range and nearby Nordic centers now allow them on their groomed trails providing hundreds of miles of trails to enjoy the latest trend in biking.

While the bike’s frame and wheels are built for use on snow, they still need to be ridden on packed trails. Despite what many promotional photos by manufacturers portray,  deep power is not a fat bike rider’s friend. The riding can be sluggish, since the tires are only inflated to two or three psi, and somewhat draining on steep uphill trails. Many people will also tell the first-time rider that falls are assured. In the end, however, it’s just like riding a bike, and falls in the snow can be fun.

“The biggest confusion [with fat bikes] is people assume you get two feet of powder and you just go right through it, but you need compaction. Whether its snowshoers, skiers, snow machines, it has to be compacted,” Josh Harrod, manager of Nederland’s Tin Shed Sports said. “Locally, Mud Lake, Brainard Lake, West Mag all see a lot of foot traffic, so there are great opportunities to ride up here.”

Jonathon Davis owner of 92Fifty Performance Bike Shop in Gilpin County, explains that snowshoers, cross country skiers and back country skiers are generally needed to pack the snow well enough for people to get out there and ride on it. “It does give you a lot more traction than you would have, obviously, on a normal mountain bike that just is going to fall through the snow, but you need to have some sort of trail that is somewhat groomed or packed in in order for it to be usable,” Davis said. “Otherwise, you will be walking an awful lot. If that’s not the case, you will be doing a lot of pushing.” David prefers riding the trails in Golden Gate Canyon State Park near his shop.

According to Dave Chase, owner of Redstone Cyclery in Lyons, that even with a 4- or 5-inch tire, the bike is going to sink quite a bit in that snow that’s not packed. “We really like the showshoers,” he said. “They are a very easy-to-get-along-with user group and are generally welcoming of other people on the trails.… and they pack a trail very nicely.” Because of this, he often rides fat bikes at Peaceful valley and Brainard Lake. “Even stuff like the lower county open spaces can be really good if it snows a lot,” he said. “Picture Rock and the rest of Heil Ranch can be great. It doesn’t stay, though. It’s great for like two days then it warms up and you’re not on it for a while. You don’t want to ride when it gets real soft, so we ride at night a lot. It’s colder, there are less trail users out and there are usually good conditions.”

Harrod explains that riding a fat bike can be more difficult than a mountain or road bike. “It’s a different riding style,” he said. “We send people to Mud Lake and they’re like, ‘Mud Lake is for beginners,’ then they come back and they’re like ‘holy crap that was hard.’ So it’s definitely slower going. Balance wise, it’s a little different, especially with the wind drifts we get. If you stay in the pack line you’re good, if you stray off that much all of a sudden everything sinks and it goes south.” It’s very important to pick the right trail to ride. “If you pick the wrong trail, then your walking and post-holing for a lot of the time,” Harrod said. Listen to the bike-store staff if they don’t recommend a certain trail. They are likely correct, and will ensure more riding than walking can be done. 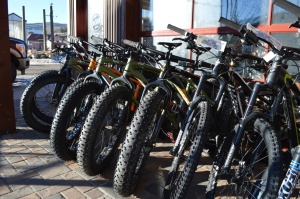 “To me, it’s not a lot different than buying lights for your bike, in the sense that if I can buy lights, now I can ride at night, I’ve spent a couple of bucks and extended my riding season,” Chase said. “It’s the same thing for my fat bike. It allows me to ride other days where I might have been just riding the couch.  If you can get out there and ride in good conditions, it’s super fun. It’s a different approach, it’s a different style of riding. Much like riding on the dirt is different than riding on the pavement.”

Riders must also keep winter weather in mind whenever they head out into the backcountry or are miles away from the Nordic center. “Dressing is a bit  of a challenge,” Harrod said. “People tend to overdress. I always suggest to people to dress 15-20 degrees warmer than you think you should. You can get a really good work out in a short amount of time.” Dress in layers and bring extra clothing to be sure any changing conditions can be addressed. “You are not out for speed,” Davis said. “You are out for enjoyment, so carrying a little extra weight in clothes isn’t a big deal.”

All levels of riders can find a way to enjoy fat bikes whether extending a riding season, having some fun on the snow or reaching backcountry destinations. “Try it, it’s fun. If you can’t put your bike away in the winter, it’s a good alternative,” Harrod said. Chase agrees. “Go out with a good attitude and put a smile on your face,” he said. “It is harder, that’s no joke, because you’ve got a lot more resistance. There’s a lot more things happening. It’s slick. You are going to fall. Period. But you fall in the snow and it’s like when you fall when you are skiing: it’s fun, it’s not a big deal,” he said. “A lot of women are digging fat bikes and it’s also bringing a lot of people that, haven’t ridden a bike in 20 years, but see it and say, ‘damn that looks like fun.’”

Check out the sport by renting or purchasing a fat bike at Tin Shed Sports in Nederland, 92Fifty in Gilpin County or A Culture of Speed in Evergreen and hitting multi-use trails around popular snowshoe and cross-country spots like Brainard Lake, West Magnolia, Rollins Pass, Golden Gate and open space trails at Heil Ranch or Mud Lake. Many shops in the metro-area sell and rent the bikes as well. Fat bikes are allowed on all National Forest trails that allow biking.

In the Winter Park area, there is an extensive trail system with hundreds of miles of fat biking fun. Beavers Sports Shop at the Best Western Hotel offers fat bike rentals and Icebox Mountain Sports rents them as well.

For assured good riding, visit one of the nearby Nordic centers that cater to the sport. YMCA of the Rockies Snow Mountain Ranch rents three sizes of the bikes for use on its Grand County trails. “The fat bikes have become hugely popular amongst winter outdoor enthusiasts and Snow Mountain Ranch is a fantastic place to experience them for the first time or to hone your biking skills on the snow,” Rachel M. Anderson, marketing manager at Snow Mountain Ranch said. “Our guests really enjoy the dedicated trail system which makes them feel like they can ride at their own pace and explore the entire property from two wheels.” The ranch offers 10K of trails groomed exclusively for fat bikes.