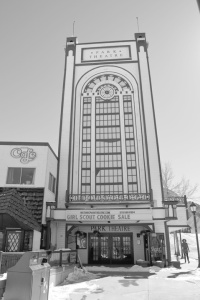 By Jennifer Pund
FRONT RANGE
Each weekend, Kayla Evans greats every patron of the Backdoor Theater in Nederland as long-time friends. After 15 years of almost never missing a shift, they pretty much are. No matter the size of a town—big or small or even smaller—a movie screening can often be the only regular form of family entertainment and community interaction. Whether screened in a library, local business, community auditorium, historic theater or modern cinema, classic, independent and newly-released blockbuster films fill a much-needed entertainment void in our small, sometimes isolated mountain towns that are miles from the nearest multiplex.

Evans has the perfect background for working at the theater. With a Bachelor’s Degree in music and a Masters in Theater, she began her career in New York. In 1991, she moved back to Colorado to help with her family’s ranch near Nederland.

“I don’t know anybody else that can do what she does. You really can’t replace her.” theater volunteer Carol Handler. said. “She cares so much for this community and is so dedicated. It really means a lot to the community.”

Coordinating the Backdoor Theater, located inside the Nederland Community Center, includes purchasing the movies and all the concessions, overseeing the Board of Directors, and much more. She says she does it for personal reasons as much as a community need. “This is my world, with props and wigs and stages, so it’s out of love for the theater and to give back to the community,” she said. “And, it’s really all about the volunteers and the time they dedicate here as well.”

“I know so many people in town, it’s like sitting around the kitchen table goofing off with your friends,” Evans said. “It’s all done in humor, kindness and inclusion, never to hurt someone’s feelings, just to have fun.”

The 260 seat theater is registered with all the major film distribution companies, giving it access to first run films. Evans also programs kids films, nature films, documentaries, classics, obscure and history films. “The only thing I don’t do is the slasher, gore-type movies,” she said.

The community theater operates on an average of about 250 volunteer-hours a month including concession stand workers, ticket takers, and after-show clean up. “In return, volunteers get to see the movie at no charge, with a treat while they watch,” Board of Directors Member Janette Taylor said.

In 2013, Evans was approached by a group dedicated to helping non-profit theaters convert to the modern standard digital projection. The theater had two weeks to come up with the funds to match a grant that had already been approved. Evens wasn’t sure it would happen. “With the board, we held a ‘chew and view’ party with a spaghetti dinner and silent action. The community really pulled together and we raised about $17,000 in just over a week,” she said. The funds were enough to cover the digital conversion and an upgraded sound system. “It shows how much this is an institution in the community and it’s supported.”

The Estes Park community has supported its local Reel Mountain Theater for more than 28 years. About five years ago, Craig Conley and his wife purchased the cinema as a way to slow down from his previous position as Head of Operations of Dickinson Theaters in Kansas City. “I helped build that company from about 25 locations to over 40, and 150 screens to about 400,” Conley said. “After running across the country building theaters, I have really enjoyed slowing down.” With family connections to the area for nearly 100 years, Conley had vacationed in Estes Park and had an idea of what they town was about. “I have had family here on and off, so it was kind of a natural fit,” he said.

When Conley took over the theater, he replaced the seats and converted all three screens to the modern digital upgraded projection system, but didn’t have to do much else. “This was a well established theater,” he said. “There wasn’t a whole lot of things I had to do, I was handed a well run movie theater.” 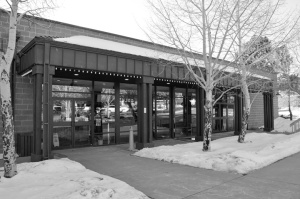 Conley said he is a fan of film and loves the business side, even the “roller coaster ride”  it can be. “It’s fascinating, all the different parts that make up the business,” he said. “Estes Park follows the trends of Hollywood, too; 2014 was kind of a down year, and we feel that too.”

The Reel Mountain theater sees a mix of locals and visitors, especially when it rains. “Everyone floods out of the park about 2 p.m., when the afternoon rain showers come in, and people who come up to visit are staying at a hotel and looking for something to do in the evening,” he said.  “We are definitely the town’s entertainment. When there’s nothing else to do, you are going to go to the movies.”

In the summer, the Historic Park Theater in downtown Estes Park shows first run films the Reel Mountain Theater can not. “Because we are only three screens, we can’t play everything,” Conley said. “And they have 35mm still, so they can run film, too. It’s great there is a place for that.”

The Park Theater is the oldest motion picture theater in the United States. The theater’s construction was started in 1913 with the landmark tower and lobby added in 1926 by owner Ralph Gwynn as an homage to represent the beauty of his true love and is now known as the “Tower of Love.” Ola and Mickey Stanger took over the theater’s operations in 1968. Upon their deaths in 2003 and 2005, collaborative efforts of relatives keep the theater operational through the summer season and remains a family-owned business.

The Park Theater has kept up with modern times. In 2013, the theater received a new digital projector, Dolby 5.1 surround sound and a new 3D system. The next year, 2014, the theater upgraded the screen and touts every one of the 224 seats has a good viewing angel.

Lyons Photography and Art Center—aside from hosting workshops, “photo jams” and classes—screens modern and classic films on the first and third Saturday each month. All showings are free, with a $10 suggested donation. Popcorn, soft drinks and candy are available and, to defray some of the costs, subscriptions with reserved seats for all showings, are offered.

In smaller mountain communities, libraries can often be the center for entertainment, which includes screening movies. The Clear Creek Library District occasionally screens films at both the Idaho Springs Library and John Tomay Memorial Library in Georgetown and often hosts trips from Clear Creek County to first-run films at a Denver theater.

The Gilpin County Library also occasionally screens movies likes this month’s free screening and discussion of the environmental movie SWITCH, April 25, in recognition of Earth Day. Other month-long series may be offered throughout the year.

The Estes Valley Library schedules several movie screenings throughout the year. Many times, they are grouped into a series about a relevant subject or popular book. Because April is National Poetry Month, the library is featuring a series of films “that celebrate poets and the poetry in our souls” in its Poetry on Film series all of April.

Movie screening can be found in even the tiniest of communities. In a small canyon west of Boulder the Four Mile Film Society holds a screening and discussion series dedicated to the exploration of the ethics of film making and film viewing twice a month. Its founder co-curated a salon series of film events at his mountain cabin, bringing together visiting filmmakers and poets with the communities of Four Mile Canyon, Gold Hill, Boulder and Denver.

Also, each year in April, the Stanley Film Festival brings the best in contemporary and classic horror film to several screens in Estes Park including the Stanley Hotel Concert Hall.
Finally, restaurants, coffee shops, historical groups and other local businesses will schedule movie nights for free viewings at times when little else is going on and locals simply need to get out of the house. Be sure to check MMAC Monthly calendar listings each month or visit the websites of the various venues to find a movie screening near you.

Obviously, options abound in the larger metro-area cities, but for a local, community experience, the small-town theater—or coffee house wall—can’t be beat. No matter where you chose to see a movie, sit back, relax and enjoy the show.

Originally published in the April 2015 issue of the MMAC Monthly