By Jeffrey V. Smith
COAL CREEK CANYON
Attention all mountain folks, this festival is for you. The annual Mountain Folk Festival in Coal Creek Canyon, Aug. 8, calls itself “the silly little sister to the Frozen Dead Guy Days” and features outlandish activities and contests, live music, artisans, vendors and general fun for mountain folks. It also helps raise funds to insure the canyon’s turf field, at the elementary school and bring neighbors together.

The event—and contests like the Mountain Obstacle Course and what was called the “Roadkill Cookoff”—were created by canyon resident Cariann Brown in 2011 with the help of Christine Neff and Linda Martin. While Brown has since moved out of the area, Neff and Martin have continued the tradition and have grown both the event and organizing team over the years. In 2015, Miriam Lynah jumped on board with even more “crazy” contest ideas. Mary Krayer and Tami Lawson are on food this year, and Heidi Osborne is a “worker bee” who also came up with this year’s T shirt design.

The Mountain Folk Festival is expected to be better than ever this time around and features the Burly Mountain Obstacle Course where participants see who can stack firewood, drag slash, “shoot” their dinner and chug a beer faster than the rest. Everyone who enters gets a T-shirt and the winner earns “fabulous prizes,” bragging rights and the use of ceremonial Viking horns and walking staff for the entire year. A kid’s version has been added this year.

There will be numerous contests including Best Flannel Shirt, Best Beard, Best Fake Beard and Best Home Brew along with competitions for watermelon eating, team popsicle eating and a putting on a frozen T-shirt. There will also be photo contests with Prettiest Chicken, Best Lawn Ornament and “There, I Fixit It!” categories. Rules for photo submissions can be found on online.

The Canyon Cookoff is one of the more serious competitions. Anyone can enter in three categories: meat, vegetable or vegetarian and dessert. Organizers warn there is “steep competition in these here hills” so plan ahead.

The festival also features live music by Jerry Rasch, Sawmill Joe and Bourbon the Mountain Lion as well as T-shirts for sale, blacksmith demonstration and an awards ceremony that begins at 3 p.m. featuring prizes for the winners of each category in every contest.

“The folks that generally attend this event are fabulous cooks and burly contenders,” Martin, president of the Coal Creek Canyon Parks and Recreation Department board, said. “This year we expect to see people of every walk of life, age, gender, you name it. Families are welcome and this year we have added some new attractions for the younger sect.”

According to Martin, the money raised will help go toward the $2,500 of liability insurance the district has for the turf field. “Constructed in 2011, the turf field gives our mountain community a safe and reliable surface to play sports on,” she said. “Before it, we had a soccer field of crusher fines (tiny gravel) and the multiple trips to the nurse for Band-Aids was enough to discourage even the bravest of coaches.” She explained that the Parks and Recreation District allows lottery funds to come into the unincorporated area in the form of Conservation Trust Fund money. This money is earmarked for capital projects, not any administrative costs. “Our expenses are quite low generally, as we are all volunteers, but the insurance for the field is a lot,” she said.

Organizers hope everyone will “come on down for a hootin’, hollerin’ good time at the Mountain Folk Festival,” Aug. 8, from 10 a.m. to 4 p.m. at the Coal Creek Canyon Improvement Association Hall and “get yer burly on.” Enter a dish in the cookoff or enter yourself in the many contests “Come eat, drink, vote for photo contests with your spare change or live contests with your holler, dance to the music of three bands, browse the vendors, artists, and blacksmith and enjoy the simple mountain pleasures,” Martin said. “You won’t be disappointed.”

Soft drinks will be available, but adult beverages—including the one needed in the obstacle course—must be your own. T-Shirts can also be pre-ordered.

The CCCIA Hall is located at 31528 Hwy. 72. Visit http://www.cccparkandrec.org to find rules and enter contests as well as find additional festival details. 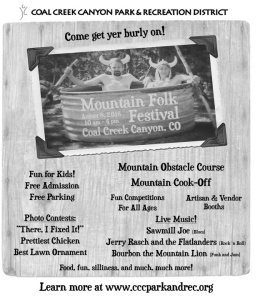