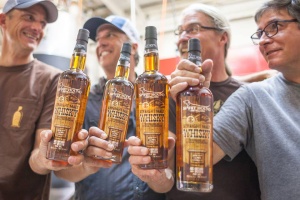 By Jennifer Pund
LYONS
Spirit Hound Distillery in Lyons opened with the intention to make whisky. After using quality ingredients in a hand-crafted still, and waiting over two years, Spirit Hound is finally ready to unveil its flagship spirit. A celebration on Aug. 22 accompanies the official release of the Barrel-Aged Straight American Whisky.

Spirit Hound Distillery is a collaboration of five friends who have a passion for high quality craft spirits, and the desire to make their own. “Whisky was the whole plan for opening,” Partner Wayne Anderson said. “It’s what everybody wanted to make, a straight malt whisky.”

The idea of doing everything by hand was a passion of the group of owners. “It’s the purest mentality of wanting to do something from scratch and have it be our own. It’s wasn’t a decision to not take short cuts,” Anderson explained, “it wasn’t whether we do it that way or not, we did it this way because this is what we are in to, it’s a raw passion about doing it.  It’s not about a brand. It’s about making a product then a brand to go with it”

Partner Craig Engelhorn used to dream of distilling his Scotch-Ale recipe in to whisky when he was the original brewer at Oskar Blues in Lyons. “I never really let go of that idea. I’ve been lucky to have had several different careers from developing software to building custom bathrooms,” he said. “Of all my different positions, producing craft beverages has been the most rewarding and interesting.”

Following the shapes and dimensions of a traditional Scottish whisky still, Englehorn hand-crafted their still using copper sheeting and a welding torch. It took the group almost a full year to build and construct the equipment needed to distill. “These guys are craftsmen and artists. This is what really separates us… what I really get off on, and I think we are in a very small percentage, is that these guys built these stills. That’s a show piece. That’s a piece of art by anybody’s standard and Craig designed and built that himself. They put it all together. They didn’t buy anything but pieces to weld together. It’s super cool and it’s in our front window.”

The group knew that a good whisky takes time. “Rather than cave into the temptation to source our whisky from another distillery or force a quick age using small barrels or oak chips, we made the early decision to produce a straight Malt Whisky of our own, from scratch using 100 percent Colorado barley,” Engelhorn said.

To legally use the terms “Straight American Whisky” Spirit Hound Distillery uses only malted barley for the base and aged for a minimum of two years in full size, 55 gallon white American oak barrels, chard on the inside. “It’s basically scotch, what we are making, but we can’t call it scotch because we are in Colorado. But it is malted barley and there’s a little bit of peat smoke, so, it’s got a lot of that similar grassy notes,” Anderson said.

The distillery, which held its Grand Opening in December 2012, had just started production when the flood of 2013 hit the town of Lyons in September. “We had six barrels put away when the flood hit and we were down for a while,” Anderson explained. “Once we got the whisky production going again and started barreling, there was a gap. So the time between barrel six and barrel seven is about a seven month gap.”

Whisky lovers don’t need to fear,  Spirit Hound produces about a barrel to 1.5 barrels a week, so they have plenty in storage to keep the bottles coming once the first barrels are empty. “Of the six barrels we put away before the flood, we are going to bottle five of them for the whisky release,” Anderson explained. “Once these five barrels worth are gone, we won’t have whisky again until around March, and then it will be a regular progression. Technically these are all over two years old, so we are letting it go longer to shorten the gap between the last one and the next.”

Now it’s time to remove the corks and make bottles of whisky available for purchase. Bottles go one sale for $60, Aug. 22 at 11 a.m., with no advance purchases and only one bottle per person. Spirit Hound Distillery will mark the occasion with a day-long party featuring  four live bands, food trucks, and an unofficial worlds largest whiskey slap at 4 p.m.

Parking for $5 and overnight camping for an additional $10 will be available at Bohn Park with a shuttle running all day.

The Groupers, Whisky Autumn, Interstate Stash Express and Cadillac Grip will provide music. Lyons’ Root Cellar & Praha Restaurant will have food available for purchase. At 4 p.m. the first Spirit Hound Whisky Slap will take place and all you need is a partner, $25, and a desire to be slapped. It includes a shot of whisky in a commemorative shot glass and a T-shirt. Register at http://www.spirithounds.com or the day of to participate.

While at the release, pick up a bottle of their other handcrafted spirits like gin, rum, vodka, white whisky,  Richardo’s Coffee Liquor and Sambuca. The distillery, located one mile east of downtown Lyons 4196 Ute Hwy is open daily at 11 a.m. for tasting, cocktails and  information about the distilling process.