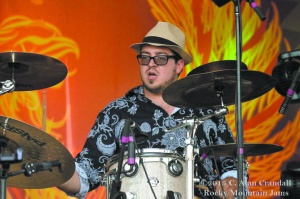 By Jennifer Pund
ROLLINSVILLE
For a long as Cody Wales can remember, his mom, Mindy, has worked hard to support their family. Now that she has been diagnosed with lung cancer and had to stop working, Cody feels it’s his time to give back. The local drummer has organized the “Thanks for Giving: A Benefit for Mindy Wales,” Nov. 28, at the Stage Stop. Stacked with local and regional talent enthusiastic to help, the event promises to be a night filled with one-of-a-kind line ups and memorial collaborations.

“My mom is the hardest working person I’ve ever known. She’s always worked my whole life, through high school and up until last year, she’s had three jobs,” Cody said.

Before gaming, Mindy owned a well-known old-time photo studio in Central City known as Mr. Yellow Bellows and for decades has been a beloved member of the Gilpin County community. “Now, she can’t work, and I think it’s driving her a little crazy,” Cody said. “She’s just at home and struggling to pay things like rent, health expenses, other bills, car payments—the basic things that you need to work three jobs to pay.”

While undergoing treatment, Mindy’s tumors have shrunk tremendously. “Health wise, she is doing better than when we first got the prognosis. That was pretty heavy,” Cody explained. “There is good news: her tumors have shrunk 50 percent. But, Mom is still fighting cancer and she is struggling to pay basic bills. The benefit is to help her take care of some expenses so she can keep focusing on her health.”

The family was shocked when they were first told of Mindy’s illness and not sure how to tell friends and community members. “When she got cancer, she didn’t want to call and tell everyone, because you don’t want to keep reliving that,” Cody said. “It’s amazing how social media has grown. I was able to reach out to a bunch of her friends that didn’t know she was ill. It was real easy for me to find them, and then I was able to tell them all at once.” Mindy has received support from her friends and family though an account with a popular fundraising website. “I did the GoFund Me thing for a little while and that really helped. It pretty much got her through the past six months or so,” he said.

His father Josey, a well-known local musician, has decades of touring experience and helped Cody sit in with local legends from a young age. “I’m a local musician and I’ve been playing up here a long time,” Cody said. “My dad got me started playing music and coming to gigs. When I was super young he would get me to play with Blackdog and others,” he explained. “So, all these people are super inspirational and were way above where I should be playing music, but I got the opportunity to do all that through my dad.”

Cody likes to give back and plays for others’ benefits when asked. Now he is the one doing the asking. “I try to give whenever I can, and play benefits, so I figured I would call on a few favors and see if the community would help me out.”

“All-original” line-ups of musicians put together by Cody to form new, unique bands. “These guys are all my friends. I decided I would just mix them all up and put people in different bands, so it should be a spontaneous awesome thing going on,” he said. “I based everything on that I have played with most of these people and they are all friends, too, so why should they play the same music they play everyday? Let’s make new music together. It will definitely be worth your money and it should be a good time.”

Cody explained the Stage Stop was an obvious choice for the event. “The Stage Stop is just so historic from all the music that has happened there and all the music I grew up seeing there,” he said. “The place is just pretty amazing. Plus the mountains up there have such a good community. This community really rallies around people that have been here for a long time. That’s something I really appreciate. It’s a great place.”

The benefit concert has a suggested donation of $15 and begins at 8 p.m. with doors at 7 p.m. The night kicks off with bluegrass and switches to electric around 10 p.m. and continues until closing time.

Come early to get a peek at the merchandise booth, which will be overflowing with T-shirts, CDs, concert tickets, music lessons from the area’s top music instructors and more. Keep an eye out for special artwork available from well-known artists. “I’m just selling everything that has been donated from all these bands and artists, and all the proceeds go to my mom,” he explained.

The Stage Stop is located at 60 Main Street in Rollinsville. Visit www.stagestoprollinsville.com for more information.

Originally published in the November 2015 issue of the MMAC Monthly.