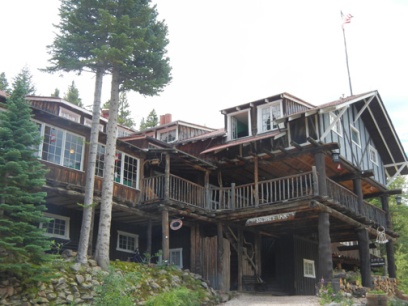 By Jeffrey V. Smith
ESTES PARK
Just like the main character in the play he’s directing, James Valone ended up at the Baldpate Inn on a creative “whim.” After acting in the legendary 1917 stage play 7 Keys for Baldpate while working in New York, he simply had to accept an offer to be in a play at the famous inn after he moved to Colorado in 2012.

“It was kind of serendipitous, Valone said. “I said ‘oh gee, the Baldpate Inn, I know it from the play, I’d like to perform there.’ So, it was kind of an actor’s whim. I really enjoyed it, of course. Who couldn’t enjoy Estes Park? Then, [the Fine Arts Guild of the Rockies] asked me to direct their Christmas show, so I did that and then they asked me to direct [7 Keys for Baldpate].”

The Baldpate Inn’s real owner, Lois Smith, had expressed an interest in doing the famous play to honor the inn’s 100th Anniversary in 2017. It was ultimately decided a smaller, Story-theater production of 7 Keys for Baldpate this year would help the theater company determine how to pull off a full scale production of the original script in the intimate Baldpate Key-thedral Theater next year. “It’s a very popular play, Valone said. “It’s the kind of play, as an actor or audience member, you don’t mind seeing it twice or three times. It’s entertaining. It’s got a nice twist at the end, too.” 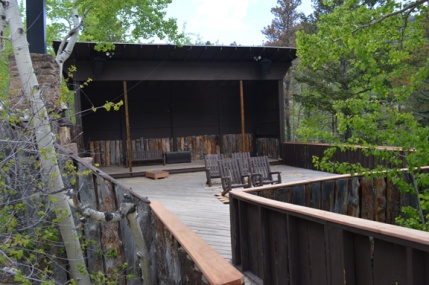 Legendary American playwright George Cohen first staged 7 Keys for Baldpate on Broadway in 1917. He based it on the 1913 mystery novel by Earl Derr Biggers. In the play, novelist B. McGee makes a bet with a wealthy friend that he can write a 10,000 word story within 24 hours. He retires to a summer mountain resort named Baldpate Inn, in the dead of winter, and locks himself in, believing he has the sole key. He is, however, visited during the night by a rapid succession of other people, including a corrupt politician, a crooked cop, a hermit, a feisty reporter, a gang of criminals and others.

None of the characters have any trouble getting into the remote inn and its becomes apparent there are seven keys to Baldpate. McGee gets no work done, instead being drawn into the hijinks of the visitors. Just before midnight, he finds out everyone is an actor hired to perpetrate a hoax, orchestrated by his friend to prevent him from completing the story. An even bigger twist follows. “It’s kind of clever,” the director said. “If it’s done right, it’s still always a surprise.

Valone, a former philosophy professor, is relatively new to Colorado, but not the theater. He has taught theater in the classroom, but also acts, directs, writes and does some dramaturgical work. He also worked in the literary department of the Actors Theatre of Louisville in Kentucky. “My home base for a long time was Kentucky, but I’ve been in several states depending on what I was doing,” he explained. 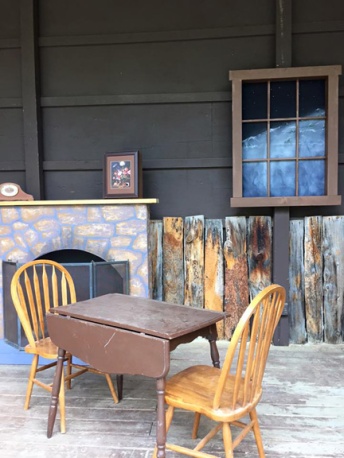 This summer’s production will be staged in a style of theatre known as “story theatre.” Actors speak both dialogue and narrative, usually performing the action as they describe it. An edited version of the original script will be performed “on book,” but with props and scenery and costumes appropriate to the time and setting of the play. “I’m rewriting [the play] for the story theater situation,” Valone explained. “That means I’ll include a narrator. I’m also doing some gender bending. The novelist was originally a male, but I cast a female.” The innkeeper in the play has also been changed to include the Baldpate’s actual owner. Rehearsal demands are also lighter than for a typical full-scale production. “The other thing with story theater is it will give us a chance to engage the audience in ways we might not otherwise.”

Valone hopes a full-scale production will be possible next year. “It would be a challenge, but not impossible to do a full production with the set design. [This year] gives the guild a chance to say ‘if we do a full production, how can we orchestrate it in that space.’ This gives me a chance to play with the space. I have permission from Lois to do some redesigning of the stage, but it saves me that trouble this time around. Story theater is entertaining enough.”

Part of the reason Valone was asked to direct the play is because he lives in Thornton and the guild wanted to expand their outreach. This summer’s cast included 11 actors. “I wound up with enough people I didn’t have to double cast. Two actors are from Denver this time, and when I can, I always try to cast someone who’s relatively new to the acting scene, and I’ve done that here as well. The outreach has expanded in two ways.” Anyone familiar with theater production in Estes Park will recognize several of the actors as well. The cast has been rehearing “in earnest” since Memorial Day weekend. “We are very happy at this point with how it is progressing,” Valone said. “Lois seems to be as well!”

The Baldpate’s historic Key-thedral Theater is a small, outdoor theater offering a bar and refreshments. Productions are moved inside in inclement weather. The play will be staged on July 8-9 and July 15-16 at 7 p.m. and on July 10 and July 17 at 3 p.m. Tickets are $15 and available in the gift shop. Dining, lodging and group packages are available.

The Baldpate Inn is located at 4900 S. Hwy. 7 in Estes Park. Visit www.fineartsguild.org and baldpateinn.com for more information. Call 970-586-5397 or e-mail events@Baldpate Inn.com for tickets.

Originally published in the July 2016 issue of the MMAC Monthly 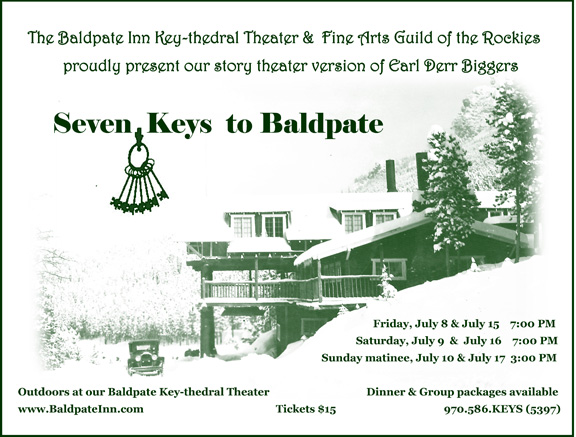