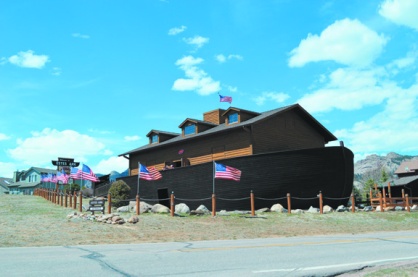 By Jeffrey Smith
ESTES PARK
There is no doubt the nationally recognized and award-winning Estes Ark is a unique place to shop. Ever since construction began on the 100-foot-long replica of Noah’s Ark in 1994, it has drawn attention for its distinctiveness, so much so, Jeopardy featured the store in a clue about “cool buildings.” New owners, Penny and Brian LeBore, are now making sure what can be found inside is just as notable. Stop in to see the store’s transformation, stunning views from the deck, new merchandise, coffee and ice cream options as well as the revived Rainbow Curve slot-car race track in the basement and a new sluice attraction on the deck.

The LaBores, who relocated to nearby Pinewood Springs from northern Minnesota to escape the harsh winters, are now living a entirely new lifestyle for the first time in decades. The couple ran a year-round fishing lodge in Baudette, Minn. on the Canadian border and simply wanted to change what they were doing. “You’re married to it,” Brian explained. “It was year round, we did ice fishing as well as summer fishing, we chartered, we ran ice houses and would plow 20-30 miles out on the ice. We just thought we’d do a change, so we thought we’d give Colorado a try for a little warmer weather.”

During a visit to Colorado to look at businesses for sale in Colorado Springs, Loveland and Longmont, the LaBores came up short finding something they wanted. They also discovered the metro area has too much traffic for their tastes. To take a break from the city before returning to Colorado Springs, the couple took a side trip to Estes Park and changed their destiny.  Before coming to Estes Park, Brian found a listing for the Estes Ark online, but didn’t tell Penny. “When we drove up,” he said, “we were coming by this place and she’s like ‘look at that, it’s an ark,’ and I said, ‘yeah, it’s for sale,’ She immediately told me, ‘well, we need to buy it.’ So here we are.” The LaBores contacted the Realtor the same day to look at the business and were immediately sold on both the store and the town. Brian and Penny, along with their 23-year-old son, relocated to the Estes Park area in July 2015 and were owners of the Estes Ark by mid-August. 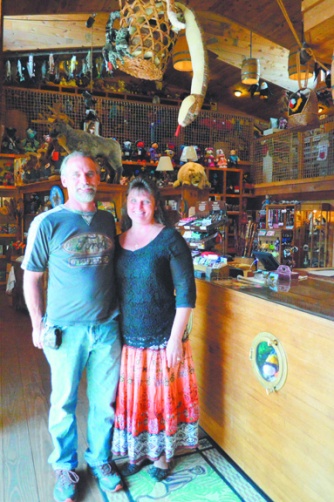 The way Penny sees it, they were “supposed” to buy it. “For me, it was like a no-brainer,” she said. There was a little bit of kicking and screaming for Brian, however, since he is a hunter and fisherman. “It’s different. It’s retail. I’m used to sitting on the water for 10 hours on a charter boat catching 30-inch walleyes,” he said. “This is a totally different world from where we came from,” Penny said, “but, how can you live in a more beautiful place? Change never bothers me.” Despite the huge change, Brian is at least able to joke he gave up being the Captain of a 27-foot boat to run a 100 foot one. He also appreciates the sunny days and friendly business environment.

The Estes Ark has undergone many changes inside and out since the LaBores took the helm. “The previous owners focused on collectable teddy bears, but we saw a different version of the store. We’ve been changing it up quite a bit,” Brian explained. “We added ice cream, a coffee bar, seating on the deck, lots of new games, puzzles, science stuff for kids. The teddy bears are phasing out some, but there’s still plush animals upstairs. I put in sluice mining on the deck so kids can come and pan for gems, fossils, arrow heads and then there’s the race track… it’s been fun.” The store is also a geocache location and part of the Across The Divide GeoTour which includes more than 40 locations in Estes Park, Grand Lake and along Trail Ridge Road in Rocky Mountain National Park.

According to Penny, they are trying to carry stuff that’s original or made in Colorado. “We just really like that,” she said. “The collectable are great, but we’re not a museum. We’ll always maintain some because they are really cool, but they take up a lot of real estate. We needed to get rid of them.”

All the changes and new energy found at Estes Ark come from the LaBores. “It’s just us,” Penny said. Even their son who helped with the slot race track moved on to open a business in Loveland. They finally hired their first employee this spring for some help. Also, Penny’s sister visits to lend a hand once a month and she’s reconnected with a high school friend who lives in Estes Park and helps out around the store.

It’s difficult to find something as unique as the Estes Ark structure itself, but all you have to do is look in the basement. A special room is home to the Rainbow Curve, a full-functioning, custom-made, 100-foot, slot-car race track. Popular in the 1960s and ’70s, public arcades where hobbyists raced have been mostly wiped off the map, which is what makes this track, and its availability to everyone, so extraordinary.

The custom Gary Gerding Fast Track, which is thought to be Colorado’s oldest slot car track, is open daily and features six, 100-foot, lanes and can run both 1/24 and 1/32 scale slot cars. Patrons are welcome to bring their own custom cars and controllers, but everything needed to race, including cars that run 100-110mph in quarter scale, is available to rent. There are 5-, 10- and 15-minute races that cost $4, $6 and $8 a person. You can also rent the track for a half-hour for $14 or full hour for $20. Controllers are $2. “We do birthdays down here, so if you have a group of six people that come in, you only pay for five,” Brian said. “Our most common race is probably the 10 minutes races. People come in and just want to try it.”

All ages have become captivated by the track. “We have ages, from a one and a half year old, sitting on the stool with parents helping, to the oldest being 92,” Brian said. “We’re not going to turn any kid down. If they have help by their parents to pull the trigger and play, we’re going to let them. We also have guys that bring their own cars and their own controllers and… run their cars on this track. There are some guys that come in with $1000 cars.”

Best of all, unlike in the past, no reservations are necessary to enjoy a race. Until the LaBores took over, the track was simply gathering dust and could have been lost forever. “It’s been down for quite a few years. [The former owners] didn’t run it much at all. It was by appointment only, they didn’t advertise it much the past seven years and they were only open from May 23-Sept. 1.” The Estes Ark is now one of Colorado’s largest dealers of slot car brands PARMA and Champion products.

The LaBores are “excited” about what they have to offer and maintaining the store’s “adventure shopping for the whole family” motto; and so are their patrons. “We have received awesome feedback from folks loving the changes we made and happy we kept it a gift shop and unique shopping experience with more diverse inventory and nostalgic games and candy,” Penny said. “Folks are enjoying the beautiful views with the new seating on the deck and ice cream sandwiches to boot. Plus, the sluice mining has been a huge hit.” The couple say it’s “everything we wanted and more.”

Originally published in the July 2016 issue of the MMAC Monthly