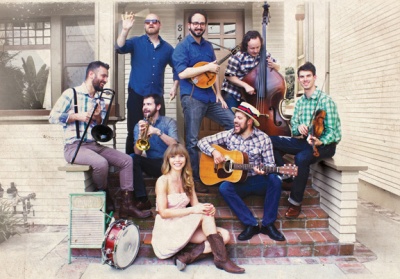 NEDERLAND
The Dustbowl Revival’s eight members calls themselves an American roots orchestra that plays it all. The Los Angeles-based band plays two Colorado shows at Nederland’s The Caribou Room, Jan. 21, and Denver’s Larimer Lounge the night before, Jan. 20.

The unique act mashes the sounds of traditional American music into a genre-hopping, time-bending dance party that coaxes new fire out of familiar coal. This isn’t a throwback band. It’s a celebration of the sounds that have kept America moving for more than a century, performed with all the flair of a medicine show and rooted in the sweat and swagger of a juke joint song swap.

The Dustbowl Revival formed in Venice Beach in late 2007, the result of a hopeful Craigslist ad posted by bandleader, guiltarist and vocalist Z. Lupetin, a Midwestern transplant who hoped to join together players in the string band and brass band traditions.

To watch the act on stage is to take part in an evolving conversation between a high spirited group of music conjurers and their audience. The horns blast, the fiddle and mandolin swoon, and the howling vocals rattle off stories about preachers, drinkers, lovers, and holy rollers.

With every show, the band is participating in the evolution of American roots music, tipping a hat to what’s come before while looking ahead to what’s on the horizon.