By Jeffrey V. Smith
IDAHO SPRINGS
For 124 years, the ARGO Tunnel has been a central character in the identity of Idaho Springs. Excavated between September 1893 and November 1910, the tunnel intersected and drained water from nearly all major gold mines—and about 250 miles of shafts—between Idaho Springs and Central City. It also allowed ore carts to be wheeled right up to the Argo Mill next door.

Although once bustling with miners and mill workers, few people had stepped inside the 4.16-mile-long engineering marvel since four workers were killed in a mining disaster in 1943; until this summer. A portion of the tunnel is now open to the public and part of the ARGO Mill & Tunnel’s popular guided tour.

The ARGO’s new ownership group purchased the facility in January from long-time owner Jim Maxwell—who is credited with saving the facility in the ’70s after 30 years of neglect. Working with state and federal agencies, city officials and others, they were able to meet safety and environmental guidelines to reopen the front portion of the tunnel and allow the public inside. A grand-opening and ribbon-cutting took place May 17 to celebrate its opening as a tourist attraction for the first time. 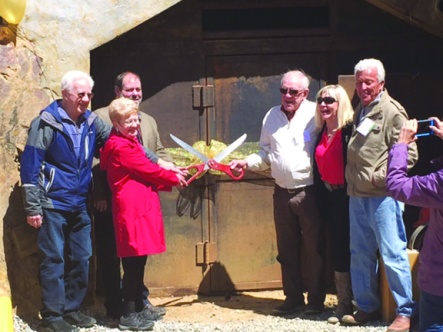 “The opening of the ARGO Tunnel is one of the most significant additions that could be made to the ARGO Tour,” General Manager Tracy Stokes said. “It is the entire reason the facility exists and it took a government multi-agency and ARGO principals to get it open for public tours. It was a series of formalities and inspections that previous owners did not attempt, for whatever reason.”

Anyone familiar with the ARGO and its guided tour will definitely notice changes since the opening of the tunnel. The Double Eagle gold mine is now permanently closed and no longer on the tour. Guests now get to take a 110-foot trip into the tunnel up to the three-foot-thick bulkhead, which is holding back millions of gallons of mine water polluted with heavy metals. The tour also includes a short history movie, narrative, mining equipment demonstration, five-story descent through the historic ARGO Mill—which once processed 300 tons of ore a day and produced over 100 million dollars of gold ore—and a large artifact museum. Each paid admission also includes gold panning.

Although the tunnel has not been used to transport ore since the 1940s, water still drains through it day and night. According to the Colorado Department of Public Health and Environment, the tunnel discharges averages 300 gallons of acidic, contaminated water per minute. Nearly 850 pounds of dissolved metals are released from the tunnel each day.

At the public opening of the tunnel, attendees were told by its owners and Idaho Springs Mayor Mike Hillman, the ARGO, which is listed on the National Historic Registry, is important to the city and seen not only as an “economic engine,” but also as a model for preserving local history and furthering environmental efforts.

The adjacent Argo Tunnel Water Treatment Plant, which began operating in April 1998, treats water being released from the Argo Tunnel as well as the Big Five Tunnel at the west end of Idaho Springs and groundwater from Virginia Canyon. The plant now removes 900-1,100 pounds of heavy metals a day before the water runs into Clear Creek, according to its manager.

The opening of the tunnel and highlighting its environmental mission is just the beginning of what its new owners, a six-business partnership of Idaho Springs investors including Bob Bowland and Mary Jane Loevlie and Denver preservationist Dana Crawford, want to accomplish on the property.

Argo Holdings LLC plans to continue its work preserving the ARGO Mill & Tunnel and developing it as an attraction, but is also looking to develop a 160-room hotel and convention center in nearby Rose Gulch. A tram, pedestrian-friendly village with retail and restaurants and single-family homes are also part of the long-term plan.

Originally published in the October 2017 issue of the MMAC Monthly