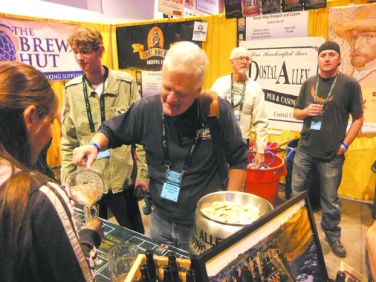 By Jeffrey V. Smith
FRONT RANGE
Beer lovers gathered in Denver in October at The Brewers Association’s 36th annual Great American Beer Festival to sample some 3,800 beers from more than 800 breweries around the country. The same association—a not-for-profit trade group dedicated to “promoting and protecting” America’s small and independent craft brewers—is working to educate beer lovers about which craft beers are independently produced and free of influence from other alcohol beverage companies, which are not themselves craft brewers. They’ve launched a new seal touting independent craft brewers and an awareness program. Most of the breweries in the Peak to Peak and Clear Creek County regions are proudly independent and support the effort.

While small and independent craft brewers represent 99 percent of the more than 5,300 breweries in the United States, they make up just 12 percent of the beer sold in the country. The rest of U.S. beer sales comes from “Big Beer” and imported brands. As large brewers continue to acquire millions of barrels of formerly independently brewed beer, the new seal from the Brewers Association helps consumers understand what they are drinking.

Featuring an iconic beer bottle shape flipped upside down, the seal captures the spirit with which craft brewers have upended beer, while informing beer lovers they are choosing a beer from a brewery that is independently owned.

“Independent craft brewers continue to turn the beer industry on its head by putting community over corporation and beer before the bottom line. They continue to better beer and our country by going beyond just making the beverage,” Brewers Association President Bob Pease said. “These small businesses give back to their backyard communities and support thousands of cities and towns across the U.S. As ‘Big Beer’ acquires former craft brands, beer drinkers have become increasingly confused about which brewers remain independent.

According to Thomas, people should support their local, independent brewer for the same reason more than 60,000 people crowded into the GABF, “discovering new beers and flavors, talking to independent business owners, learning more about beer from the individuals that brew them and not from paid corporate ads or talking heads.”

The Brewers Association is “rightfully focused” on beer distribution, getting the beer from the brewery to the beer drinker, Thomas explained. “Beer distribution—needlessly complicated after the repeal of prohibition—advertising dollars and economies of scale remain the biggest advantages that corporate brewers have over the independent brewer; not perseverance, personality and passion,” he said.

To Jeff Green of Very Nice Brewing in Nederland, being an independent brewer means he gets to do what he wants. “Of course, we have to be business-minded enough to pay the bills, but apart from that we get to focus on what we want, which is the quality of the beer and culture around our brewery,” he said.
The brewer doesn’t think corporations are inherently bad, but understands they are “profit machines” that must focus on shareholder value. According to Green, “An independent brewer’s label says that the company displaying the label can focus on the beer, the culture and the people who make it great—profit is secondary. I think you can tell it is effective because it has ruffled so many feathers in the corporate world. We proudly display it!”

Steve Skalski of Georgetown’s Guenella Pass Brewery believes “good beer, is good beer, no matter where it comes from,” but the bigger issue is “trying to compete on a level playing field.” He says smaller breweries can never compete with large corporations when it comes to price, but “they can make their beer better, they can self-distribute (in a state like Colorado), and get their beer on the shelf the best they can. I’m an open market guy, so I honestly believe that if they’ve got a great product, and they can sell it cheaper, than I’ve got to figure out that equation for myself. That’s my challenge, not anyone else’s challenge.”

When it comes to an independent brewer label, Skalski likes that “it gives people the ability to understand who we are. I’m hoping that the independent labeling gets the word out there’s a bunch of small, craft breweries out there that put their heart and soul into it,” he said. “And, if Coors Light ends up tasting better than all this, then shame on me.”

Rock Cut Brewery co-owner Matt Heiser explains craft drinkers are looking for choice and the best product they can find. “The more we share our customers, our ideas, our knowledge and experience, the more the craft and independent market can grow and be a larger part of the communities we serve,” he said.

According to Heiser, “beer consumers should drink the products they enjoy most and in the environments where they will most enjoy them.” From that perspective size and independence doesn’t much matter. “However, the consumer should recognize that every beer they drink that comes from non-independent breweries is putting money and power into a machine that lobbies against its own industry, that works to hurt community-centered breweries and that wants to limit their future choices of available beers,” he said.

“That’s our view of why the Brewers Association created the Independent Brewer label and why we’re proud to display it. We want to stand up for ourselves and to fight back against the few members of our industry that are already fighting against us, and ultimately our customers. Craft consumers are both loyal and promiscuous—they will love us and return to us and they will drink other beer as well. This is a great thing, as long as the independent industry can survive.”

© Originally published in the November 2017 issue of the MMAC Monthly